Today I am interviewing Keith Rosson, author of the new literary/alternate history novel, The Mercy of the Tide.

DJ: Hey Keith! Thanks for agreeing to do this interview!

Keith Rosson: Suuuuure. I’m an author and illustrator. Have a new book out, my first novel. Let’s see. I, uh, love libraries and book sales and halftones and distressed text and cassettes and punk. I did a long-running punk zine called Avow for years and years and then made the leap to fiction. The Mercy of the Tide is the fourth novel I’ve written in my life, and the first to be published. I wrote my first novel at 20, and it was understandably baaaaaaad. Then I wrote my second at 27 or so, and it was still pretty bad. Then I wrote my third, and it was better (titled Smoke City, it will be published in January 2018 by my glorious publisher, Meerkat Press) and then I wrote Mercy. In between, I write for music publications Razorcake and Rebel Noise, as well as penning short stories which have been published in placed like PANK, December, Cream City Review, the Nervous Breakdown, and more. Been twice nominated for a Pushcart. Finalist for the New American Fiction Prize and Birdwhistle Prize for Short Fiction. Currently writing a novel that revolves somewhat around a unicorn – no, seriously! – but there’s a significant part of me that can’t wait to finish it and get back to writing short stories.

DJ: What is The Mercy of the Tide about?

Keith: Can I just use the synopsis that the Meerkat folks and I came up with? After working on this book for so long and then hustling it for as hard as we have, I’ve kinda run out of wacky adjectives and new ways to describe it. Here goes. Riptide, Oregon, 1983. A sleepy coastal town, where crime usually consists of underage drinking down at a Wolf Point bonfire. But then strange things start happening—a human skeleton is unearthed in a local park and mutilated animals begin appearing, seemingly sacrificed, on the town’s beaches. The Mercy of the Tide follows four people drawn irrevocably together by a recent tragedy as they do their best to reclaim their lives—leading them all to a discovery that will change them and their town forever. That work?

DJ: What were some of your influences for The Mercy of the Tide?

Keith: Ooof. Tough one. I think it’s tough to avoid writing anything horror-related – and lofty literary elements aside, there are strong nods to horror in Mercy – without acknowledging the debt to Stephen King. He’s just the go-to guy in that field, at least for me. There’s also a passible nod to Robert McCammon’s Swan Song, if only for the fact that how deftly he handled so many points of view as well. Beyond that, I read a lot of fiction, and if you can blend literary stuff with genre fiction, I’m all in. All that stuff is bound to cause a collective seep, as it were. Which, as a side note, is a pretty good name for a grindcore band.

Keith: I hope – and so far it seems like I did an okay job – that it’s their humanness that makes them compelling and relatable. It’s a character-driven novel for sure. A fatal car accident has left four people trying to pick up the pieces of their lives after having lost loved ones. Dave Dobbs, the town sheriff, has lost his wife, June. Sam Finster, a high school senior, and Trina, his nine year-old sister, have lost their mother, Melissa. Nick Hayslip, Dobbs’s deputy, is also reeling from the accident, but for a reason that isn’t revealed until later in the book. I think they’re all written in a way that lends to being relatable – they’re all flawed, and they all have their moments of grace or bravery or love, just like all of us.

DJ: What is the world and setting of The Mercy of the TIde like?

Keith: Well, it’s an alternate history novel set on the Oregon coast in the 1980s. Everything is generally the same as it is in this plane or universe or whatever – though soon enough, small changes start to appear that show you this one’s like our world but not quite. I don’t want to give too much away, but I’ll say that the alternate reality stuff is a slow reveal; it’s really a secondary element to the book. Characters and story first, weird alternate history stuff next, you know?

DJ: What was your favorite part about writing The Mercy of the Tide?

Keith: You know, when the writing is going well, there’s nothing better. It’s the most fun I can have as a person, really. I love it. It’s life-affirming and joyous. I love fitting the jigsaw pieces of plot together, trying to figure out loopholes or glaring errors, and once the story is solidly pieced together (usually around the 3rd complete edit), then I really get into messing around with sentence structure and tone and all that other good stuff. But it takes a few run-throughs to get to that point. I love it when the bulk of the story’s there and I get to fine-tune all the little bits and pieces.

Keith: I hope they talk about the quality of the writing, and how much they cared about these people, and that they liked the story, even if it was grim. But ultimately, that’s out of my hands – books really take on a life of their own after you write em, you know? Which is the biggest reason why I think it’s in terribly poor taste to ever respond to a negative review or lambast a negative reviewer, even – especially – if you feel slighted or misrepresented: the story isn’t yours anymore, once it goes out into the world. In some ways, it’s everyone’s. At least in the sense that now anyone at all can react to it however they want.

DJ: Now that The Mercy of the Tide is released, what is next for you?

Keith: I mentioned earlier that I’m writing a novel that somewhat revolves around a unicorn sighting, so there’s that. It’s taken quite a while to put together, and there’s still a lot of work to be done. (“Writing is hard,” he wrote.) In the meantime, Meerkat Press is publishing my second novel, Smoke City, in January 2018, which I’m incredibly excited about. It’s a marked departure from Mercy in a lot of ways: tone and pacing, for one – this one’s less dense, a quicker read, and with a bit more grim hilarity to it. I hope it’s different, anyway. And after I tackle the unicorn book and my beta readers kindly savage it and my agent kindly savages it and then I fix it and he sends it out to editors to consider, I just cannot wait to get back to writing short stories. I miss them fiercely.

DJ: Before we go, what is that one thing you’d like readers to know about The Mercy of the Tide that we haven’t talked about yet?

Keith: I’m being a liiiiittle obtuse here, but not one reviewer has mentioned the black doors yet. Not a one. I find that pretty surprising. (This will make sense if/when folks read the book.)

Keith: I guess I’d just like to mention that if you come across a book that you really enjoy, let people know! It means so much to the people involved to hear that stuff! A tweet or a review or a recommendation – be it on Twitter, Goodreads, Amazon, Facebook, your own blog, whatever – can be massively helpful to authors and their publishers, many of whom are taking pretty big risks by putting books out these days. Let people know! I feel super fortunate to have met a lot of great readers already, and especially for us debut authors, every bit helps.

Keith: Thank YOU for having me. I appreciate it. Catch ya on the flipside.

*** The Mercy of the Tide is published by Meerkat Press and is available TODAY!!! *** 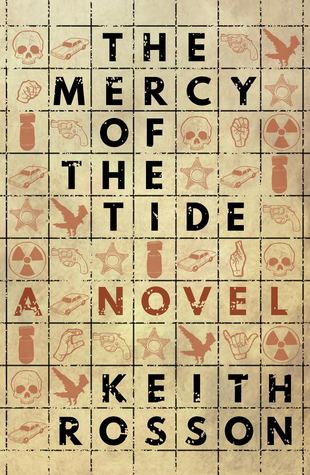 Riptide, Oregon, 1983. A sleepy coastal town, where crime usually consists of underage drinking down at a Wolf Point bonfire. But then strange things start happening—a human skeleton is unearthed in a local park and mutilated animals begin appearing, seemingly sacrificed, on the town’s beaches.

The Mercy of the Tide follows four people drawn irrevocably together by a recent tragedy as they do their best to reclaim their lives—leading them all to a discovery that will change them and their town forever. At the heart of the story are Sam Finster, a senior in high school mourning the death of his mother, and his sister Trina, a nine-year-old deaf girl who denies her grief by dreaming of a nuclear apocalypse as Cold War tensions rise. Meanwhile, Sheriff Dave Dobbs and officer Nick Hayslip must try to put their own sorrows aside to figure out who, or what, is wreaking havoc on their once-idyllic town.

Keith Rosson paints outside the typical genre lines with his brilliant debut novel. It is a gorgeously written book that merges the sly wonder of magical realism and alternate history with the depth and characterization of literary fiction.

Keith Rosson is the author of the novels The Mercy of the Tide and Smoke City, and his short fiction has appeared in Cream City Review, PANK, December, The Nervous Breakdown, and more. He’s been twice nominated for a Pushcart Prize and a finalist for the Birdwhistle Prize for Short Fiction. He’s also an illustrator and graphic designer, with clients that include Green Day, Against Me, the Goo Goo Dolls, and others. A fierce advocate of public libraries and non-ironic adulation of the cassette tape, he can be found at keithrosson.com.