Today I am interviewing Roy Claflin, author of the science-fiction novel, The Anomaly Problem.

DJ: Hey Roy! Thanks for agreeing to do this interview!

Roy Claflin: I’ve been writing and making things up since grade school. After a misspent early-adulthood and many unsatisfying jobs, I’ve decided to make a career of it. The Anomaly Problem is my first novel. When I’m not writing, I have three cats that demand my attention, and I compose and record music. And sometimes I play videogames.

DJ: What is The Anomaly Problem about?

Roy: The book is set in the near future and follows four protagonists: Trevor, a low-level criminal living in Chicago; Eve, a former thief who used to work with Trevor; Jeremy, Trevor’s brother and a corporate mercenary contracted by the Department of Homeland Security; and Desmond, the thirteen-year-old subject of a psychology experiment. The story is set against the background of heightened national tension due to the lingering threat of domestic terrorism.

DJ: What were some of your influences for The Anomaly Problem?

Roy: I’m a huge fan of William Gibson, so his work is a heavy influence on mine, along with authors like Neal Stephenson, Joe Haldeman, and many others. I think my writing is also influenced by the movies I watch, films from directors like Michael Mann and Quentin Tarantino, among others.

Roy: Eve and Trevor are old-school criminals operating in a world that no longer uses cash and where everyone is under surveillance. Jeremy is ambitious and part of an oppressive system, but he believes that what he’s doing is the best thing for the country. And while you might find it easy to sympathize with Desmond because he’s just a kid, that may change quickly. All the main characters have blood on their hands, but they have their own reasons for doing the things they do, and they might even have something of a moral code. In other words, they’re not all bad.

DJ: What is the world and setting of The Anomaly Problem like?

Roy: The story takes place in an America that has seen horrible terrorist attacks perpetrated by American citizens. The government has hired private contractors to police the population. People disappear. Everyone’s under surveillance. It’s no wonder much of the public has thrown their support behind the biggest terror organization, a group called Anomaly, who have promised to bring down the government.

DJ: What was your favorite part about writing The Anomaly Problem?

Roy: This is a story that’s been rattling around in my head for a long time. To actually type the thing out and put these characters on the page was incredibly satisfying.

DJ: Did you have a particular goal when you began writing the The Anomaly Problem? Was there a particular message or meaning you are hoping to get across when readers finish it? Or is there perhaps a certain theme to the story?

Roy: I wanted to create a character-driven story that happens to be set in a science fiction-type world. You won’t see too much in the way of advanced technology in The Anomaly Problem. It’s mainly about the characters. And while domestic terrorism provides a background to the action, my main goal was to make sure I didn’t create a story that relies on a generic terrorist plot. Anomaly has plans and schemes underway, but this is not a story about terrorism.

DJ: Now that The Anomaly Problem is released, what is next for you?

Roy: I am currently working on the sequel, titled The Anomaly War. I expect it to be out later this year, although this is proving to be a much harder book to write. I’ll release more details about this soon. 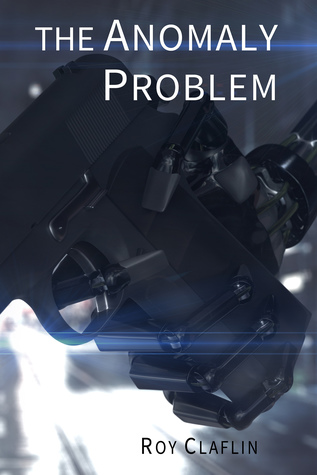 The United States has a Problem.

They call themselves Anomaly. Their supporters call them revolutionaries. The government calls them terrorists. They’re American-made and growing fast.

And they’ve made a promise to bring down the U.S. Government.

Trevor Cyrus has his own problems as he tries to put some distance between himself and his psychotic criminal bosses. Meanwhile, his former partner Eve has learned of a potential big score and makes an impulsive play for it, but it isn’t the sort of thing she’d normally want to profit from. And Jeremy Cyrus, a government-contracted corporate mercenary, has his eye on career advancement, and finding Anomaly’s leadership is the key.

With more terror on the horizon, these three, with their shared pasts and chaotic presents, will converge around Desmond, the thirteen-year-old subject of a psychological experiment who is only trying to survive after escaping captivity.

Roy Claflin lives in Illinois, the part that isn’t Chicago, with his wife. When he’s not writing, he enjoys reading, creating music, and obeying his cats.