Today I am interviewing Benjamin Paterson, author of the new epic fantasy novel, The Shadow of His Hand, first book in the Markulian Prophecies series.

DJ: Hey Benjamin! Thanks for agreeing to do this interview!

Benjamin Patterson: I’m a 34 year old father of four from a regional town in Northern Australia. Currently it’s winter where I live and on a really cold night the temperature might drop as low as 12 degrees Celsius (53 degrees Fahrenheit). Hence, I love sport and camping. Fun fact: I was made redundant last week as the company I’m working for folded. Argh!!

DJ: What is The Shadow of His Hand about?

Benjamin: It’s a low epic fantasy novel about a prophecy, a forgotten god and a reluctant soldier. The story starts with the nations of the Realm severely overmatched by an invading force and needing a miracle to survive. Our soldier, Fredrick, just so happens to get caught up in a plot that’s trying to produce that miracle, a plot that involves an inconsolable infant who only hushes when he’s around.

Add to that a few other plot lines that involve a miserable High King and an ascendant returned to the living and you’ve got yourself volume 1 of the Markulian Prophecies.

DJ: What were some of your influences for The Shadow of His Hand and the series?

Benjamin: That’s hard to say. When I began reading I was a huge Wheel of Time and Sword of Truth fan. I love the old school fantasy series. I guess they’ve shaped my story telling.

Benjamin: My protagonist, Fredrick, is not your regular fantasy hero. In fact, the only super power he appears to possess is the ability to hush an infant marked by prophecy. In chapter one we find Fredrick concealing his soldier’s uniform with a plain shirt so that nobody will ask him for help. That kind of best sums up his enthusiasm for the job.

Another main character, the High King, is young and ill, not very regal or commanding. His first task is to choose himself a bride from any willing woman in the Realm, and there are plenty of volunteers. Jaithe’s sister is one of those willing bride-to-be’s. Jaithe herself is just along to watch her sister fail. So there’s plenty of material there as that unfolds.

DJ: What is the world and setting of the Markulian Prophecies series like?

Benjamin: I’ll be honest. World building is not my passion. I usually provide only what’s relevant to the story, as I much prefer a novel that focusses on characters and conflicts than intricate details. Having said that, the setting of the first novel is called ‘The Realm.’ There are seven nations in the realm each with their own royal family, yet they all swear fealty to the High King. It’s a medieval landscape with castles, palaces, keeps, taverns, forests, snow-capped mountains, etc. The Realm has endured one generation of peace since the last civil war was quelled.

In terms of religion, most people choose one of the twelve Guardians as their personal god, depending on whether they are a farmer, a sailor, a merchant and so on. The High King and his household are meant to stay faithful to the Unseen God, Elan, who existed before the Guardians. The Unseen God’s temple lies near the royal place in Corozon.

DJ: What was your favorite part about writing The Shadow of His Hand?

Benjamin: I have a suspicion the scene where the High King chooses his bride will be a fan favorite. Readers so far have indicated they enjoy it.

In another part somebody gets keel-hauled. That might stick in people’s memory too.

Many people are also asking about book two and what’s going to happen to poor old Fredrick.

DJ: Did you have a particular goal when you began writing the Markulian Prophecies series? The Shadow of His Hand is only the first book, but is there a particular message or meaning you are hoping to get across when readers finish it? Or is there perhaps a certain theme to the story?

Benjamin: I didn’t set out with any particular goal or theme in mind when writing book one, other than to finish it and get it read by someone other than my mother. But on that note, I’ve never been a fan of modern fantasy where it feels like people are competing to make the vilest and most evil characters and then urge us to cheer for them because they are up against even worse enemies. I understand heroes need to have flaws, but I prefer reading stories where at least the cause of the hero is good and not based on personal vendetta’s, etc. So I guess you could say there are themes around faith, duty and honor.

DJ: When I read, I love to collect quotes – whether it be because they’re funny, foodie, or have a personal meaning to me. Do you have any favorite quotes from The Shadow of His Hand that you can share with us?

Benjamin: ‘More is caught than taught.’ I included that in the story because it’s true (and I couldn’t think of anything else at the time).

DJ: Now that The Shadow of His Hand is released, what is next for you?

Benjamin: Besides looking for a new Job? I’m finding time to busily write volume 2. I suspect there’ll be a few people angry with me if I don’t get that finished soon.

DJ: Before we go, what is that one thing you’d like readers to know about The Shadow of His Hand and the Markulian Prophecies series that we haven’t talked about yet?

Benjamin: Thank you. It’s been a pleasure.

*** The Shadow of His Hand is published by MoshPit Publishing and is available TODAY!!! *** 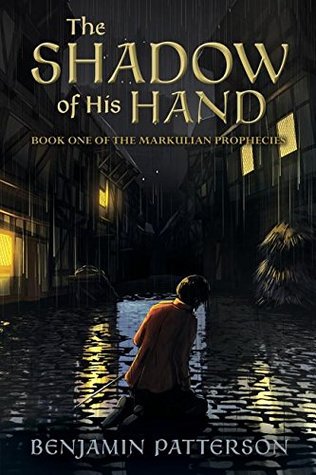 For centuries the oft-forgotten Unseen God has seemed distant and uncaring, but when the Realm is threatened by the all-conquering armies from Jerika, an ancient oracle is triggered. Now this foretelling is the only hope of salvation and its fulfilment lies in the trembling hands of a reluctant soldier, a princess and an infant marked by prophecy.

Set in a vivid medieval world, The Shadow of His Hand begins an epic struggle between good and evil, full of danger, romance and despair. Those caught in the grip of destiny will be required to sacrifice all, but even that may not be enough.

Benjamin Patterson lives in North Queensland, Australia with his wife and four children. When not writing, working or volunteering he’s battling a life-controlling addiction to sport, an addiction that his poor wife has discovered is easily passed from father to sons.

The Shadow of His Hand is Benjamin’s first novel, a story he started telling more than ten years before its publication. He gave up on the book many times – literally every time he went back and read what he had written so far – but after much encouragement from friends and family he finally got it done… and the reviews are rave!