Today I am interviewing Curtis C. Chen, author of Kangaroo Too, the second novel in the Kangaroo series of science fiction spy thrillers.

DJ: Hey Curtis! Thanks for agreeing to do this interview!

Curtis C. Chen: Hi DJ, thanks for inviting me! I’m a freelance writer living near Portland, Oregon. My first short fiction was published in 2006, and my first novel (Waypoint Kangaroo) in 2016. I’m a former software engineer and one of the co-founders of Puzzled Pint, a free event that happens in over 40 locations around the world every month.

DJ: What is Kangaroo Too about?

Curtis: It’s about 300 pages long. (rimshot) I’m telling that joke as an example of the dumb jokes you can expect throughout the book, because that’s the kind of person Kangaroo is. There are also spaceships, robots, future spy tech, secrets, lies, and betrayals. Fun for the whole family!

DJ: What were some of your influences for Kangaroo Too and the Kangaroo series?

Curtis: One obvious touchstone is James Bond (007), though I very consciously wanted to subvert a lot of spy fiction tropes. And I’m a lifelong Star Trek fan, but I wanted a more grounded science fiction setting for Kangaroo. Yes, there are spaceships, but they don’t go faster than light; no, we haven’t met any aliens, and we kind of have our hands full dealing with other humans.

DJ: Now, Kangaroo Too is the second book in the series, so some readers will be wondering: is it possible to read this without having read the first?

Curtis: Absolutely. I always wanted the Kangaroo books to be mostly standalone, so new readers could pick up any one and get into the story without having to learn a lot of history.

DJ: Could you briefly tell us a little about your main characters? Do they have any cool quirks or habits, or any reason why readers will sympathize with them? (aka What makes them compelling?)

Curtis: Kangaroo has an ability called “the pocket” that lets him hide things in an empty parallel universe. He’s the only one who can do this, which is why he was recruited to be a spy, but he’s not super interested in all the other spy stuff. Because he’s special, he can get away with a lot of things, and that might serve him well if he weren’t testing those boundaries all the time. He really has no one but himself to blame for all the trouble he constantly gets into.

Curtis: In my mind, it’s our current world projected a couple of centuries into the future. Humans are living on other planets, we have affordable and reliable space travel, and technology has improved all our lives. But people are still people, and we still fight each other for dumb reasons, so we continue to have militaries and warships and espionage.

DJ: How have the reviews been from readers, bloggers, and reviewers for the first book in the series, Waypoint Kangaroo? Is there anything that your audience seems to be particularly enjoying or is eager to find out more about?

Curtis: Well, Waypoint Kangaroo is a Locus Awards Finalist this year in the First Novel Category, so that’s a good sign! Reviews have mostly been positive. And the one question I’ve gotten the most is actually the last line of that first book.

DJ: What was your favorite part about writing Kangaroo Too?

Curtis: I really liked being able to open up the world a little more. The first book was very tightly contained, setting-wise, and it was fun to show Kangaroo traveling to more and different places this time and getting in over his head in new and exciting ways.

DJ: When I read, I love to collect quotes – whether it be because they’re funny, foodie, or have a personal meaning to me. Do you have any favorite quotes from Kangaroo Too that you can share with us?

Curtis: “Take down the bad old lady. Make sure she won’t hurt anyone else. Eighty-five percent chance of punching.”

DJ: Now that Kangaroo Too is released, what is next for you?

Curtis: I’m getting back to some short fiction, and also working on a standalone novel–still science fiction, but this one is a more contemporary, Michael Crichton-esque techno-thriller. We’ll see how that goes.

Curtis: Thanks again for the invitation!

*** Kangaroo Too is published by Thomas Dunne Books and is available TODAY!!! *** 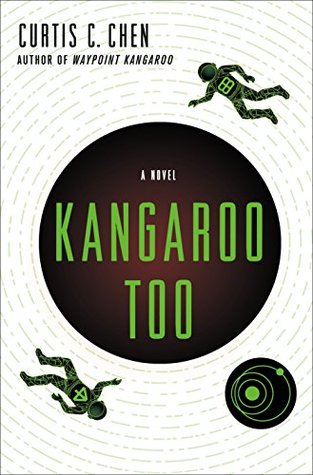 Set in the same world as Waypoint Kangaroo, Curtis C. Chen’s Kangaroo Too is bursting with adrenaline and intrigue in this unique outer space adventure.

On the way home from his latest mission, secret agent Kangaroo’s spacecraft is wrecked by a rogue mining robot. The agency tracks the bot back to the Moon, where a retired asteroid miner—code named “Clementine” —might have information about who’s behind the sabotage.

Clementine will only deal with Jessica Chu, Kangaroo’s personal physician and a former military doctor once deployed in the asteroid belt. Kangaroo accompanies Jessica as a courier, smuggling Clementine’s payment of solid gold in the pocket universe that only he can use.

What should be a simple infiltration is hindered by the nearly one million tourists celebrating the anniversary of the first Moon landing. And before Kangaroo and Jessica can make contact, Lunar authorities arrest Jessica for the murder of a local worker.

Jessica won’t explain why she met the victim in secret or erased security footage that could exonerate her. To make things worse, a sudden terror attack puts the whole Moon under lockdown. Now Kangaroo alone has to get Clementine to talk, clear Jessica’s name, and stop a crooked scheme which threatens to ruin approximately one million vacations.

But old secrets are buried on the Moon, and digging up the past will make Kangaroo’s future very complicated…

Once a Silicon Valley software engineer, CURTIS C. CHEN (陳致宇) now writes speculative fiction and runs puzzle games near Portland, Oregon. His debut novel WAYPOINT KANGAROO (a 2017 Locus Awards Finalist) is a science fiction thriller about a superpowered spy facing his toughest mission yet: vacation. The sequel, KANGAROO TOO, lands our hero on the Moon to confront long-buried secrets.

Curtis’ short stories have appeared in Daily Science Fiction, MISSION: TOMORROW, and OREGON READS ALOUD. He is a graduate of the Clarion West and Viable Paradise writers’ workshops.

You can find Curtis at Puzzled Pint Portland on the second Tuesday of most every month. And yes, there is a puzzle hidden in each of the KANGAROO book covers! Finding the rabbit holes is left as an exercise for the reader.

Visit him online at: http://curtiscchen.com