DJ: Hey Bailey! Thanks for agreeing to do this interview!

Bailey Ordiway: Well, to keep it simple, I am a self published author and blogger. I published my first novel, Blackout, when I was 17 and have since published two other books. American Holdover, and the first volume of Entertainment 100. Entertainment 100 is actually a collector’s edition comprised of a hundred entertainment reviews from my blog.

DJ: What is American Holdovers about?

Bailey: American Holdovers is my third published novel and chronicles not only my time, but, also my many friends and fellow holdovers during our time as a holdover at Ft. Jackson during a hurricane and the consequences and events that transpired because of this a couple years back. It is the only book ever written about holdovers actually.

Bailey: Every character in the book is based off of a real person, but, I can tell you first hand that there are quite a few of them with crazy quirks! And a lot of things happen in the book that readers would sympathize with, mainly treatment of the holdovers. Because of that, though, I put in a bit of humor to balance out.

DJ: What was your favorite part about writing American Holdovers?

Bailey: It sounds strange, but, when you write a book you put yourself in the situation you are writing. It feels as real as life itself. So, while writing American Holdover it was good to see my friends again that I have not seen in years.

DJ: What was your goal when you began writing American Holdovers? Is there a particular message or meaning you are hoping to get across when readers finish it? Or is there perhaps a certain theme to the story?

Bailey: When I first began writing American Holdovers it was more of a therapy really, kind of like a way to get over the experience. After a while though it evolved into an actual book. People read it and told me it was a good story and something people needed to read. As for a message, I suppose I just wanted people to be aware of the existence of holdovers.

DJ: When I read, I love to collect quotes – whether it be because they’re funny, foodie, or have a personal meaning to me. Do you have any favorite quotes from American Holdovers that you can share with us?

Bailey: I realize this is long, but, just writing it made me laugh.

Schneider was my favorite Drill Sergeant. He had crazy eyes (or meth eyes as we liked to call them). They were big, unblinking, and stared into your very soul. He had a strange way of talking too. He would say the punctuation no matter what.

“Hey comma fuck face. Come get your fucking poo-poo paper for your bay exclamation point.” Then he would belch in your face, usually through a mega phone. Cool dude.

DJ: Now that American Holdovers is released, what is next for you?

Bailey: I want to focus on my blog for a while. As I said before I also run a blog, baileybee.me where I write reviews, articles, and top lists. I started it in 2015 to help with writer’s block. It went on the backburner though while I was finishing up American Holdovers… I do already have my next book planned though. I won’t say much, but, it’s a romantic Tragedy.

DJ: Before we go, what is that one thing you’d like readers to know about American Holdovers that we haven’t talked about yet?

Bailey: I have always stressed to people that I hold no animosity towards the military. I have many friends and family that are given a great life because of it. I just had a story to tell.

Bailey: Thank you for having me! 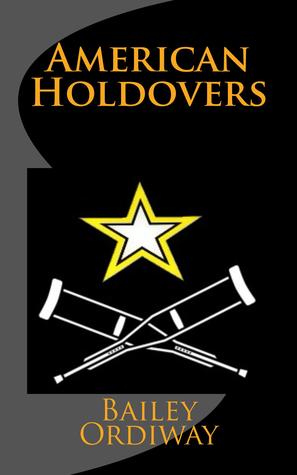 In the military there is a group of people known as holdovers. A holdover is someone that was seen unfit for duty once they arrived for basic training. They then wait around, sometimes months on end doing the dirty work on base till they get to go home. This is the untold story of just a few of them.

Based on a true story.

Bailey Ordiway is an award winning blogger, and critic, as well as an established self-published author. His blog, which he started in 2015, consists of reviews, articles, and top lists. His reviews have been described as personal, conversational, and honest. He first established himself as an author at the age of 17 after many years of writing. His first novel, Blackout, was published in 2014. Since then he has published two more books, American Holdovers, and the first volume of Entertainment 100.