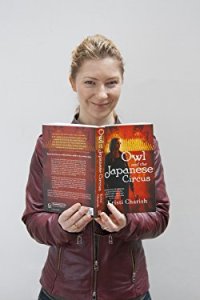 *Kristi Charish was kind enough to provided two (2) free copies (physical or Audible) of Owl and the Electric Samurai to go along with her interview! The link and details for the giveaway are located at the bottom of the post, following the interview 🙂

Today I am interviewing Kristi Charish, author of the new urban fantasy novel, Owl and the Electric Samurai, third book in The Adventures of the Owl series.

DJ: Hey Kristi! Thanks for agreeing to do this interview!

Kristi Charish: Hey DJ! Well, for starters I wear a couple of hats. For years I was a research scientist (I have a MSc in Molecular Biology and Biochemistry and a PhD in cell biology) where I used fruit flies and fruit fly genetics to questions about cell division and cell architecture, and how the two relate (it all fell under the cancer research umbrella). I also spent some of my early University days in Anthropology/Archaeology and Ecology.

So how did I go from academic research to writing SFF? I’ve always loved fiction and used to read novels in between experiments and on the bus, but I didn’t try writing until quite late – while I was writing up my PhD thesis. I figured why not finally give it a shot?

Owl was the first novel I finished, and I was lucky enough to pick up an agent. Simon & Schuster picked up the series and we’re now four books in plus another three in my other series with Random House Canada, Kincaid Strange (also UF).

DJ: What is Owl and the Electric Samurai and then The Adventures of the Owl series about? 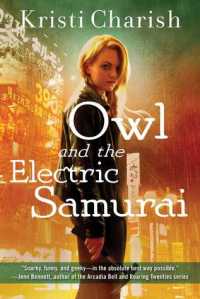 Kristi: It is an urban fantasy/adventure series about a reluctant Indiana Jane (Owl/Alix Hiboux) who has to navigate a hidden supernatural world.

DJ: What were some of your influences for The Adventures of the Owl series?

Kristi: At the top of the list is Indiana Jones, one of my all time favorite series (the first three that is). But there are also a lot of other classic 80s style adventures thrown in, including The Mummy, Big Trouble in Little China, Romancing the Stone, The Goonies, and even a bit of Buffy the Vampire Slayer. I really loved the lighter, fun adventure movie tones that the 80s were famous for and it really informs a lot of the series.

On the book side, Ian Hamilton’s The Ava Lee series and James Clavall’s Taipan and King Rat are also heavy influences.

Kristi: Owl is an Archaeology graduate student turned international antiquities thief. She is often brash, is famous for her big mouth (which she often sticks her foot in), has a few issues with authority, and probably drinks too much Corona. She also has a big heart, tries her hardest to do the right thing, is loyal to her friends, and really, really, hates supernaturals.

Oh yes, and there is her cat, Captain. He may just be her most redeemable quality.

DJ: What is the world and setting of The Adventures of the Owl series like?

Kristi: It really is an urban fantasy, meaning that the world Owl works in is exactly like ours with the exception of the existence of supernatural monsters, like dragons, vampires, succubi, etc.

DJ: How have the reviews been from readers, bloggers, and reviewers for the first two books of The Adventures of the Owl series? Is there anything that your audience seems to be particularly enjoying or is eager to find out more about?

Kristi: I make a rule of trying to avoid reviews – that’s the readers domain, not the authors 😉 I will say that feedback from readers has unanimously said that Owl’s cat, Captain, may be the best part of the series.

DJ: What was your favorite part about writing Owl and the Electric Samurai?

DJ: What do you think readers will be talking about most once they finish ir?

Kristi: So far it’s been the ending and the fate of one of the characters. There’s also been a fair bit of discussion regarding the epilogue (I often start the next book in the epilogue, after the novel is tied up). I didn’t mean for it to be so much of a cliffhanger but apparently it was.

DJ: What was your goal when you began writing The Adventures of the Owl series? The series is not yet complete, but when it is, is there a particular message or meaning you are hoping to get across when readers finish it? Or is there perhaps a certain theme to the story?

Kristi: I really did just want to write a really fun adventure story – I miss those. I also wanted a series where Indiana Jones get’s to be the hero, not saved by the hero, and where she doesn’t need to be a sex object (like early Tomb Raider incarnations).

DJ: How many more books do you plan on having in The Adventures of the Owl series?

Kristi: How many do people want? J But seriously, it’s so fun writing the series I will keep going as long as they still want books.

DJ: When I read, I love to collect quotes – whether it be because they’re funny, foodie, or have a personal meaning to me. Do you have any favorite quotes from Owl and the Electric Samurai that you can share with us?

Kristi: ‘What archaeology school did you go to? Hold my beer and watch this?’

DJ: Now that Owl and the Electric Samurai is released, what is next for you?

Kristi: A couple things- First, for readers of the series the fourth book, Owl and the Tiger Thieves, is out September 25th, so not that long away. I also have another urban fantasy/mystery series, called Kincaid Strange, and next year will be exciting as the second book, Lipstick Voodoo, comes out.

DJ: Before we go, what is that one thing you’d like readers to know about Owl and the Electric Samurai and The Adventures of the Owl series that we haven’t talked about yet?

Kristi: If you’re looking for some fun adventure, globe trotting, and aren’t opposed to a little thievery, then you may find a kindred adventure spirit amongst these pages…and a cat. Definitely a very unique cat 😉

*** Owl and the Electric Samurai is published by Gallery Books and is available TODAY!!! ***

Please click on the Rafflecopter link below to enter to win one of two (2) copies (your choice of physical or Audible) of Owl and the Electric Samurai by Kristi Cherish! Good luck! 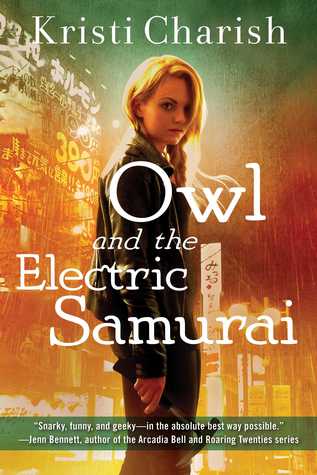 The International Archaeology Association (IAA) is responsible for keeping all things supernatural under wraps. They’re also responsible for ruining the promising archaeology career of Alix Hiboux, better known as Owl.

Needless to say, Owl’s still a little sore about that.

Just to keep Owl’s life lively, the IAA has opened a bounty on the two designers of World Quest, the online RPG that is much, much more than it seems. Owl needs to locate the notorious gaming duo before the other mercenaries do. But finding the gamers won’t be easy since every clue points to them hiding out in the legendary lost city of Shangri-La. Not to mention that the last time Owl and the game designers spoke, their conversation didn’t exactly end on the best note…

Meanwhile, undercurrents of supernatural politics are running amok in Tokyo, dragging Owl and her friends into a deadly game of wits with an opponent who calls himself the Electric Samurai. The cost of losing? All-out civil war between two powerful supernatural factions.

All in all, just another great day on the job.

Kristi is a scientist and science fiction/urban fantasy author who resides in Vancouver, Canada. Kristi writes what she loves; adventure heavy stories featuring strong, savvy female protagonists with the occasional RPG fantasy game thrown in the mix. She is also a co-host on the popular Adventures in Sci-Fi Publishing Podcast.

The first installment in her debut urban fantasy series, OWL AND THE JAPANESE CIRCUS (Simon & Schuster) is out and available in bookstores and through online ebook retailers. The second in series, OWL AND THE CITY OF ANGELS, is out Jan 2016. Her second series, KINCAID STRANGE (Random House Canada), about a voodoo practioner living in Seattle, is out May 2016.

She received her BSc and MSc from Simon Fraser University in Molecular Biology and Biochemistry, and her PhD in Zoology from the University of British Columbia. She is represented by Carolyn Forde at Westwood Creative Artists.