DJ: Hey John! Thanks for agreeing to do this interview!

John L. Lansdale: My pleasure. I was born and raised with my brother Joe in rural east Texas. Our parents were the best a kid could have. They taught us how to survive and pursue our dreams to be successful in life. I have a great wife Mary and four kids. I love music and animals and after many things I begin to write some ten years ago and since then writing has become my obsession.

DJ: What is Zombie Gold about?

Bain’s mother died when he was a kid his father unknown. The owner of the Flying G ranch adopted and raised him. Chris wants to be a champion bronc rider to impress his adoptive father. Will Littlefield is a college student working the summer on the ranch for extra money before he returns to college to be a lawyer. His dad is a champion bronc rider but Will has no interest in it. Chris gets in trouble trying to ride a big wild gray horse the ranch is saving for the rodeo. The foreman sends him and Will on a trip to Kaman mountain to retrieve lost cattle. They discover soldier Zombies from the civil war when they wander into a cave and the Zombies chase them into a time warp that takes them back to the civil war during the battle of Gettysburg when the Zombies are live union soldiers. From there the story unfolds.

DJ: What were some of your influences for Zombie Gold?

John: Survival of two young cowboys during a time of war in a place they would never have believed they would be.

John: Chris has trained two horses to act like dogs and they can set, roll over and fetch. They are even named Rover and Spot. Will is a history buff who knows what’s going to happen next in the civil war before it does and shocks the people of the time with his answers.

DJ: What is the world and setting of Zombie Goldlike?

John: It encompasses modern day and 150 years ago as Chris and Will are transported back to the civil war era with the survival of the country and themselves in doubt.

DJ: Over the decades we have seen many types of zombies: plain walkers like in Night of the Living Dead, runners like in Dawn of the Dead, or super-strength and intelligence like in 28 Days Later… What are your zombies like?

John: They are civil war soldiers trapped for over a hundred years on a mountain who became living dead after a pac with the devil. They retain their army style, speed and strength with an added taste for human flesh

DJ: What was your favorite part about writing Zombie Gold?

John: Chris and Will’s enter action of personalities with each other. Meeting historical figures, kin and visiting civil war locations before they were history.

John: They are saying Zombie Gold is a book for everyone a page turner they couldn’t put down and want a sequel

DJ: What was your goal when you began writing Zombie Gold? Is there a particular message or meaning you are hoping to get across when readers finish it? Or is there perhaps a certain theme to the story?

John: To write a book that anyone could enjoy, regardless of their favorite genre.

DJ: When I read, I love to collect quotes – whether it be because they’re funny, foodie, or have a personal meaning to me. Do you have any favorite quotes from Zombie Gold that you can share with us?

John: “I didn’t want to be rich,it’s too much responsibility”-Will

DJ: Now that Zombie Goldis released, what is next for you?

John: My next novel to be released is SLOW BULLET. The digital version is available now, with a hardback release in July. After that HORSE OF A DIFFERENT COLOR – a horror mystery, will be released in a hardback edition and digital formats in August, with two westerns to follow. Also after many request, I have begun to write a sequel to Zombie Gold.

I’m not just a one genre writer. I enjoy writing about what I feel at the time.in styles for everyone. Before writing novels, I was a successful author of many Tales From the Crypt titles.IDW comics and several other comic companies.

DJ: Before we go, what is that one thingyou’d like readers to know about Zombie Gold that we haven’t talked about yet?

John: I hope readers will enjoy reading the book as much as I enjoyed writing it.

John: As some reviews said Zombie Gold is a western stew that anyone would like and leaves you with a taste of pride for reading it.

John: Thank you for the interview. I like to talk about Zombie Gold.

*** Zombie Gold is published by Short, Scary Tales and is available TODAY!!! *** 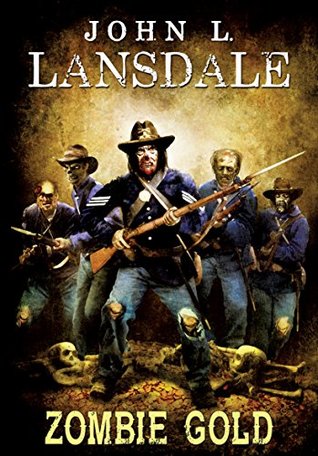 Two strangers become brothers in their fight for survival when they are swept away by an unimagined zombie force into a time and place that they could have never anticipated or believed.

Their struggle becomes a mission not only to return home but to right the wrongs they see. They witness the most horrendous battle in our history at Gettysburg and meet historical figures.

Their faith in each other keeps them going when it appears all is lost. They face many obstacles on their way back to the mountain where they were cast into the past by the evils of Zombie Gold hoping they can return to the present.

John L. Lansdale was born and raised in East Texas. He is married to the love of his life Mary. They have four children. He is a retired Army reserve Psychological Operations Officer and a combat veteran with numerous medals and awards. He’s an inventor, county music song writer performer and television programmer. He produced and directed the Television Special “Ladies of Country Music.” He has produced several albums in Nashville, hosted his own radio shows and won awards for producing and writing radio and TV commercials. He was a writer and editor of a business newspaper. He has worked as a comic book writer for Tales from the Crypt, IDW, Grave Tales, Cemetery Dance and several more. He co-authored the Shadows West and Hell’s Bounty novels with his brother Joe. Currently he has authored the following novels in the process of publication: Horse of a Different Color, Slow Bullet, Long Walk Home and The Last Good Day.