Today I am interviewing Jon Del Arroz, author of the new steampunk novel, For Steam and Country.

DJ: Hey Jon! Thanks for agreeing to do this interview!

Jon Del Arroz: Happy to be here, thank you! I’m a sci-fi/fantasy author who started with a superhero webcomic, Flying Sparks, which garnered a lot of attention back in 2011-2013. From there I was picked up as a staff writer for the Doomtown: Reloaded card game, producing a short story or more for the progressing storyline there that was set in the Deadlands RPG universe. Over that time I wrote four novels, of which two have been released now. Star Realms: Rescue Run, a space opera based on the card game, is my most famous to date, but there’s a lot of rave reviews for my new book, For Steam And Country.

DJ: What is For Steam and Country about?

Jon: It’s a Steampunk fantasy adventure about a girl who inherits an airship and has to make hard decisions on how to help her country of Rislandia fend off an invading army. It’s a true hero’s journey.

DJ: What were some of your influences for For Steam and Country?

Jon: Elizabeth Moon really informs my writing style more than anyone else. Though it’s a different genre, I try to utilize characterization/prose much in the same way she does. Sharon Lee is another on that front. Both have beautiful books. On the steampunk side, Beth Cato’s Clockwork series did a lot for my imagination. The Final Fantasy video games did as well, of which you’ll see a lot of easter eggs referencing those games in the book.

Jon: Zaira Von Monocle, my main character, is a bit stubborn, hard headed but she’s not afraid of an honest day’s work either. She’ll go out and try things and work hard til she gets the job done and get it right. I tried to make a protagonist who would make mistakes like a normal person/teenager thrust into a tough situation, but is still someone to root for.

Most readers say Talyen von Cravat is their favorite character in the book. She’s wise, a bit hot-headed herself, but also very good at what she does. She came up through the Grand Rislandian Army based on her own hard work.

James Gentry, Zaira’s best friend, is a wide-eyed farmboy who dreams of bigger things. He’s excited to experience life and has big plans, and won’t let anything get in the way.

Really I wanted to make all the heroes someone that people can fall in love with, like a lot of the characters from our youths in Star Wars or Harry Potter or whatnot. Keeping things in a way that’s not too dark, with some good real things to connect to, but also something that makes people fist pump when they win.

DJ: What is the world and setting of For Steam and Country like?

Jon: I made a fantasy world that is kinda like late 1800s early 1900s midwest in a lot of ways. I geographically shaped the world a bit like Spain with a north and south and mountains separating the other side, but it’s really a middle of the industrialization type of fantasy. There’s strange creatures out there, but they’re a bit hidden from view, something to discover as the series unfolds. Airships and clockwork are big part of this world as well.

DJ: What is it about steampunk that you like so much?

Jon: I love the swashbuckling adventure that it draws the imagination to. If you look at the costumes, most are looking like they just stepped off an airship, ready for battle. That’s really appealing for me.

DJ: What was your favorite part about writing For Steam and Country?

Jon: I enjoyed how quickly paced it all ways. Each scene just flowed so well into the next that it came very naturally and it was kinda sad when it was done!

Jon: So far I’m getting a couple of things: the airship battles, how cool Talyen Von Cravat is, and how they love Zaira’s pet ferret, Toby. 🙂

DJ: What was your goal when you began writing For Steam and Country? Is there a particular message or meaning you are hoping to get across when readers finish it? Or is there perhaps a certain theme to the story?

Jon: No real message other than work hard, don’t let people get you down just because you don’t have the experience or aren’t their vision of who should be doing a job. It’s all on you and you can persevere if you try hard. Also, family and friends are important, loyalty is everything!

DJ: Now that For Steam and Country is released, what is next for you?

Jon: I’m working on completely rewriting my first book I wrote, titled Starcrossed, a space opera about a human and an alien who fall in love despite being on opposite sides of a heated war. I’m also drafting a really fun action-oriented space opera. When I’m done with those, I have the Mars planetary anthology which I’m editing for Superversive Press for later this year, and then I’ll be writing my sequel to For Steam And Country.

DJ: Before we go, what is that one thing you’d like readers to know about For Steam and Country that we haven’t talked about yet?

Jon: I wrote this for two reasons: 1. I wanted to write a book about an airship that had propellers, not one that was a blimp (I’m a simple guy!) and 2. I wanted the writing challenge of writing from a first person female perspective. I’m very proud of how it turned out, and can’t wait to write more! 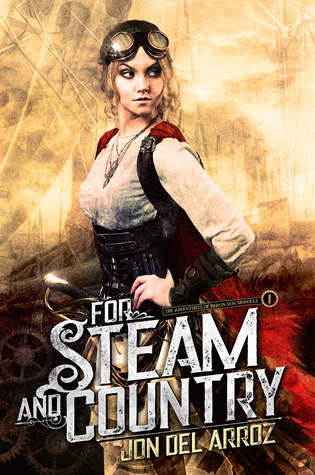 Her father’s been pronounced dead. Destructive earthquakes ravage the countryside. An invading army looms over the horizon. And Zaira’s day is just getting started…

Abandoned at an early age, Zaira von Monocle found life as the daughter of a great adventurer to be filled with hard work and difficulty. She quickly learned to rely on only herself. But when a messenger brought news that her father was dead and that she was the heir to his airship, her world turned upside down.

Zaira soon finds herself trapped in the midst of a war between her home country of Rislandia and the cruel Wyranth Empire, whose soldiers are acting peculiarly—almost inhuman. With the enemy army advancing, her newfound ship’s crew may be the only ones who can save the kingdom.

“FOR STEAM AND COUNTRY is a rousing girl-powered fantasy tale. I thoroughly enjoyed this action-packed airship adventure!”
– Laurie Forest, author of The Black Witch

Jon Del Arroz is the author of the top-10 Amazon bestselling Space Opera novel, Star Realms: Rescue Run. He hails from the San Francisco Bay Area and plans on continuing writing science fiction and space opera until the end of his days. He’s currently taking a small break from space in the next few months to release a steampunk novel, For Steam and Country, which will be the first book in the Adventures of Baron von Monocle series.