Today I am interviewing Richard Martins, author of the new epic fantasy novel, The Trench.

Richard Martins: Thank you for inviting me DJ. I’m a retired pharmacist. I was in the business for 35 years but have been retired for the last 11 years. I’ve been married to my wife Diana for 46 years and we have a son who’s a journalist in Los Angeles.

DJ: What is The Trench about?

Richard: It’s a young man’s quest to save his mother. Fifteen-year-old Seth Tyler has spent his entire life on the run with his parents. Who they are running from and why he is kept in the dark are only two of the mysteries he has learned to live with. Tragedy strikes when first his grandfather, then his

father is murdered and his mother poisoned. Seth sets out to find the cure for his mother and the truth about his parent’s past. A misstep in the mountains of Germany drops him into a primitive underworld peopled by strange creatures and gifted humans. The Trench is a feral land where danger lurks for the unwary and Seth finds himself immediately fighting for his life. When he discovers that this underworld is the birthplace of his parents and the truth about their heritage he knows the answers he seeks lie here below.

But the people of the Trench still value that sixth sense lost to those on the surface and they see something unique in Seth. With the help of a huge dog who adopts him and a growing menagerie of companions Seth must travel the length of the Trench to confront the evil lurking at the bottom.

DJ: What were some of your influences for The Trench?

Richard: I’m a big fan of Stephen Donaldson’s Thomas Covenant series. Tolkien is another obvious influence but Robert Louis Stephenson impressed me at an early age with his ability to write stories that both adults and young readers could enjoy.

Richard: I love creating characters and an epic fantasy gave me lots of opportunities to do this. For now, I’ll focus on Seth and his closest companions.

Seth is a teenager forced into manhood. This new environment is transforming him in ways he cannot explain. There is a force within him inherited from his parents but beyond anything the Trench has ever seen. He feels responsible for those who have committed themselves to him and his cause. He distrusts the terrible power lurking within him and his ability to keep it from killing innocents.

Wren is an Alfendare scout who attaches herself to Seth early on. She stands about 4-foot-8 and looks like a 12 year-old waif from some Dickens story. Her language is a combination of chirps, clicks, whistles and flying fingers. Appearances are deceiving though as Wren is 27, agile as an acrobat and exceedingly dangerous. She is also intensely loyal to Seth.

Orm (Ormarandon to his mother) meets Seth later and assigns himself as Seth’s bodyguard. He is Theronian, from a distant part of the Trench. Orm is huge with muscles on muscles. The kind mother nature hands out not the pumping iron type. He looks like Thor, sports a battle axe (Big Slice), has a wry sense of humor and is intensely loyal to Seth.

Tag, because my readers would never forgive me if I left Seth’s dog out. The first to sense Seth’s special charisma and leap into the abyss after Seth. Golden fur, as big as a bear and twice as dangerous. Never far from Seth’s side and also intensely loyal.

Narvaal. A Volve (short for Evolved) warrior who picks up Seth’s aura early on and follows him the length of the Trench in an effort to eliminate him. Tall, thin and muscled he has a tattooed face with a high forehead and bluish skin tone. Murderous and deadly from the beginning, he becomes a psychopathic killer after an encounter with Seth sends him into madness. He is devoted to killing Seth.

DJ: What is the world and setting of The Trench like?

Richard: The Trench was formed when an intergalactic harvester, carrying a cargo of slave labor collected from dozens of different planets, crashed into Earth boring a tunnel into the crust 300 miles wide and hundreds of miles long. The starship finished it’s plunge in a huge underground lake. Before it sank, crewmembers were able to make their way to shore with supplies and survival gear. These were the Evolved (or Volve to the rest of the Trench). But one young Evolved crewmember. A young woman by the name of Mirri was appalled by the lesser beings about to die in the holds below decks. She managed to rescue a sizable group and lead them to the opposite shore. It would be many years before the Evolved attempted to explore up the Trench but by them Mirri and her mix of less-evolved humans from a variety of planets were ready to send them back into their hole.

Thus, was born the Palisades and behind it the free Trench. Peopled by refugees from a dozen different planetary environments and strays from the surface they keep the Volve contained at the bottom of this deep hole in Europe.

DJ: What was your favorite part about writing The Trench?

Richard: As I mentioned I love creating memorable characters. They seem to grow of their own accord and almost force themselves into the narrative. I also loved the freedom creating a long-hidden land allowed me. Creatures such as cave bears and cave lions have not become extinct and having refugees from the starship allowed me to create some gifted and unusual races.

Richard: Well actually, most of my readers say “This would make a great movie.”

Peter Jackson’s name has been mentioned a lot. Bye the way, if you know

him have him give me a call.

DJ: What was your goal when you began writing The Trench? Is there a particular message or meaning you are hoping to get across when readers finish it? Or is there perhaps a certain theme to the story?

Richard: My only goal was to tell a good story. To make it original, believable and compelling. After finishing it I think I was most proud of the strong roles women have in my story.

DJ: When I read, I love to collect quotes – whether it be because they’re funny, foodie, or have a personal meaning to me. Do you have any favorite quotes from The Trench that you can share with us?

Richard: I like this admonition to Seth from his mentor Greythorn.

“You can’t change who you are and the only wrong would be to reject it. Do you understand? These talents are your birthright. Use them wisely, but for Mirri’s sake, embrace your true nature and nurture every self-discovery as if your life depends on it. Because it very likely does.”

DJ: Now that The Trench is released, what is next for you?

Richard: Well, having created this very cool land it would be a shame to leave so much of it unexplored. More tales from the Trench are planned. Something shorter I vow.

DJ: Before we go, what is that one thing you’d like readers to know about The Trench that we haven’t talked about yet?

Richard: Just that the Trench is subject to the same rules of physics as the surface world. While there are “gifted” races and individuals there is no magic or flying dragons, carpets, or stallions. The Trench is illuminated by a coating of Glaze attached to the ceiling. This residue, left by the starship’s plunge, is excited by the sun’s rays causing the Trench to follow the day-night cycle as the surface world.

Richard: Just another thank you for allowing me to talk about my book. 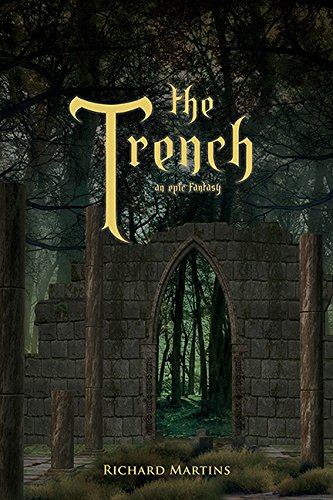 Thirteen-year-old Seth Tyler’s world has crumbled. Two of his family members have been murdered and the last, his mother, lies dying three floors below in a secluded manor far from his native California. A lifetime of being hunted by a mysterious entity has brought the pair to this apparent dead end in Germany’s darkest forest. Desperate, Seth sets out to find his mother’s cure, but his quest soon takes an unexpected turn when a misstep drops him into a primitive world existing beneath our own. His arrival does not go unnoticed and our unlikely hero soon finds himself fighting for his life. Thanks to the aid of some unusual allies, he avoids falling prey to troll-like creatures created by the same enemy plaguing his family.

Peopled by a menagerie of unique inhabitants, the Trench is a long-hidden land formed when humans first began their climb up the food chain. When Seth finds out his parents are refugees from this subterranean setting, and that those responsible for his father’s death dwell here as well, he begins to wonder whether chance or fate has stranded him in this underworld. But he’s not the only one with questions. That sixth sense so prized by those who call the Trench home makes one thing evident to all: Seth is different. Different enough to scare the hell out of friend and foe alike.

As the search for a cure leads Seth and his companions deeper into this realm of constant surprises, the forces of the Trench begin to forge a man from the boy. But the bloodline of this particular boy is frighteningly unique and the young man he will become could tip an age-old balance. Before his journey is done, both Seth and the denizens of the Trench will be forced to confront the evil attempting to break its bonds at the bottom of the world.

The author is a native of Salinas, California currently residing in the Bay Area. As a retired pharmacist he enjoys gardening, reading, gaming, and writing. Plans for another book set in the unique world of the Trench have begun.