Today I am interviewing Gareth Worthington, author of the new science-fiction novel, Children of the Fifth Sun.

DJ: Hey Gareth! Thanks for agreeing to do this interview!

Gareth Worthington: Hey! Okay, well, I’m 37 years old, father of two living in Switzerland. I currently work for the pharmaceutical industry bringing new cancer medicines to patients. In my life I always try to improve on myself, and so attempt to achieve a lot. I have a degree in Marine Biology, a PhD in endocrinology, have lived in the USA, all over Europe and in Asia; play guitar; draw; have trained in Jeet Kune Do, Muay Thai and MMA; hand tagged sharks; and been a model. I’m also the Director of Business Development for a new books-to-TV/film company called the Vesuvian Media Group. I keep busy, LOL.

DJ: What is Children of the Fifth Sun about?

Gareth: Children of the Fifth Sun is an action adventure story with a dash of science fiction thrown in. Think Indiana Jones meets the Abyss!

The main premise is that in the late 1940s, Chinese explorers found the frozen corpse of a strange animal in Siberia. The US government stole it and for more than 60 years have been conducting experiments. In the last few years, they managed to clone it and create a live specimen.

The animal, known as K’in, is believed to be part of a race of beings that evolved alongside humans, even giving our kind science, math and civility. But many millennia ago, we killed them all.

Now, there is a covert war between various governments, and even cults, who want to harness the intelligence/power K’in is believed to have locked inside.

When a mission goes wrong in the South China sea, the US government is forced to recruit a civilian to help. This civilian, Kelly Graham, will change everything – in ways no one could have guessed.

It’s one hundred and forty thousand words – because there is a lot of story! I hope that readers will think I’ve done the topics justice.

DJ: What were some of your influences for Children of the Fifth Sun?

Gareth: I am actually heavily influenced by non-fiction – alternate history books written by the likes of Graham Hancock and Robert Bauval. I like to piece together real theories and facts, together with a dash of sci fi so the reader is never sure what is real.

Gareth: Behind the sci fi and action, at its core it is a story about the human need for another person – and what happens if you find that person or people and lose them. Through Kelly Graham, we see a man who has lost his wife and child through tragedy and so built a wall around him to never feel for another person again lest he be hurt again. He uses sarcasm and foul language to keep people from getting too close. Frankly at the beginning he’s quite unlikeable. But, through a twist of fate he is forced to open up and begin to feel things he buried. Many of my female readers seem to pick up on this and feel for Kelly – seeing through his bullshit. I never expected to have a female readership with this book given the macro story, but its worked out that way. Of course this is also fed by the ‘will they, wont they’ relationship he has with the government agent who recruits him – Freya Nilsson. She is a strong woman, who had also experienced loss, but has dealt with it by becoming career focused. Her part in the world’s fate is much bigger than she could imagine.

And then there is K’in, but to tell you about him would be giving too much away…

DJ: What is the world and setting of Children of the Fifth Sun like?

Gareth: Children of the Fifth Sun is set in the modern day, and the series will span from 2012 to about 2030. It has multiple geographic locations, including Egypt, Latin America, Hong Kong, India and Siberia. And that’s just book one. Most of the locations are ancient sites, with artefacts and buildings that currently cannot be explained by historians. Overall, the tone of the book is that humanity is on the brink of huge change, though we are not ready for it.

DJ: What was your favorite part about writing Children of the Fifth Sun?

Gareth: For me it was two things. Firstly, doing all the research and finding cool theories, facts, tid bits that I could fold into the story and link together. From the alignment of the Giza pyramids to the constellation of Orion, to the true use of the Antikythera mechanism, to why the US formed the NSA, to Roswell, and even the true use of the theorized reflecting pools at Teotihuacan. Secondly, it was writing Kelly Graham’s arc. He is very much based on me, and so he grew as I did. How the book ends is important for me, on a personal level.

Gareth: It is almost always what a cool movie it would make! It has already been optioned, but given the location, CGI and action we’re looking at a 150M dollar movie. Still, we have interested parties…

DJ: What was your goal when you began writing Children of the Fifth Sun? Is there a particular message or meaning you are hoping to get across when readers finish it? Or is there perhaps a certain theme to the story?

Gareth: For me, it’s for readers to consider this: we do not see the world as it is, we it as we are. Everyone has their demons and it colors their view of everything. If we understand that, we can actually have a peaceful society. Understand that while you may not agree with someone, they have a reason for thinking how they do – just like you. Of course, the other theme is loss. We will all lose someone we love. It’s how we deal with that that’s important.

DJ: When I read, I love to collect quotes – whether it be because they’re funny, foodie, or have a personal meaning to me. Do you have any favorite quotes from Children of the Fifth Sun that you can share with us?

Gareth: Hahah. Yes. One of my favorites is from Kelly: “I’ve got serious nutflies.” He’s referring to a gut feeling about something, like butterflies in your stomach – but for him it’s more of a tingle in his testicles. It makes sense for him!

DJ: Now that Children of the Fifth Sun is released, what is next for you?

Gareth: So, I am writing the second book in the Children of the Fifth Sun trilogy. But I have an unrelated thriller coming out next year called It Takes Death to Reach a Star. I wrote it with my good friend Stu Jones. It a futuristic thriller that considers what happens to us if the social divide continues to widen, anti-bacterial resistance isn’t counteracted and the war on terror escalates. You can find out all about it here: www.ittakesdeathtoreachastar.com

*** Children of the Fifth Sun is published by Vesuvian Books and is available TODAY!!! *** 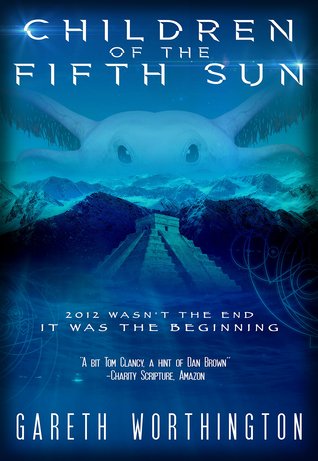 IN ALMOST EVERY BELIEF SYSTEM ON EARTH, there exists a single unifying mythos: thousands of years ago a great flood devastated the Earth’s inhabitants. From the ruins of this cataclysm, a race of beings emerged from the sea bestowing knowledge and culture upon humanity, saving us from our selfish drive toward extinction. Some say this race were “ancient aliens” who came to assist our evolution.

But what if they weren’t alien at all? What if they evolved right here on Earth, alongside humans . . . and they are still here? And, what if the World’s governments already know?

Kelly Graham is a narcissistic self-assured freelance photographer specializing in underwater assignments. While on a project in the Amazon with his best friend, Chris D’Souza, a mysterious and beautiful government official, Freya Nilsson, enters Kelly’s life and turns it upside down. Her simple request to retrieve a strange object from deep underwater puts him in the middle of an international conspiracy. A conspiracy that threatens to change the course of human history.

Gareth holds a degree in marine biology, a PhD in Endocrinology, and currently educates the World’s doctors on new cancer therapies for the pharmaceutical industry. He has hand-tagged sharks in California; and trained in various martial arts, including Jeet Kune Do, Muay Thai, and MMA at the EVOLVE MMA gym in Singapore and Phoenix KampfSport Switzerland.

Worthington is also the Director of Business Development for the Vesuvian Media Group Inc – a unique books-to-film company.

Born in Plymouth UK, he currently reside outside of Zurich, Switzerland