DJ: Hey Vivian! Thanks for agreeing to do this interview!

Vivian Shaw: My pleasure! I’ve been writing books since I was probably about eleven years old, and I’ve been an active fanfic author since the early 2000s, but this is the first time I’ve ever been actually published and I could not be happier. I’m the daughter of a couple of British scientists, born in Kenya, and we moved around a lot chasing the postdoc funding when I was little, but we moved to Maryland in 1987 and I’ve been here ever since. I have a BA in art history and an MFA in creative writing, and I live in Baltimore with my wife, the author Arkady Martine.

DJ: What is Strange Practice about?

Vivian: The very short version is this: Dr. Greta Helsing sees dead people, from ten to four on weekdays and by appointment, at her Harley Street clinic. Dead people and other individuals who might not generally be considered people at all: mummies, were-creatures, banshees, barrow-wights, ghouls, etcetera. Greta inherited the practice from her father, and she’s just pretty much getting on with things and living her normal supernatural-adjacent life when a new threat emerges – a sect of murderous monks apparently intent on dispatching both the quick and the dead – and she and her friends (and patients) have to figure out how to stop the monks if she wants to save both her practice and her life.

DJ: What were some of your influences for Strange Practice and the series?

Vivian: Well, directly, the source material: Varney the Vampyre, or The Feast of Blood; John Polidori’s The Vampyre; and the somewhat-apocryphal story of the vampire of Croglin Grange. (Dracula and Carmilla both showed up in a previous draft, but they’ll be part of this universe later on.) I read a fantastic book called Prisoner of Vampires, by Nancy Garden, when I was just a kid – and that not only introduced me to a lot of more esoteric vampire stories but did a little bit of what I’m doing here, bringing together the various classic tales into a coherent and cohesive single canon. Stylistically I think my main influences are and always have been Mervyn Peake, Robin McKinley, Stephen King, Terry Pratchett, and Neil Gaiman.

DJ: Could you briefly tell us a little about your main characters? Do they have any cool quirks or habits, or any reason why readers would sympathize with them?

Vivian: Greta Helsing is absolutely, completely, and simply human. In her world, this is somewhat of a handicap: she has zero supernatural powers whatsoever, not a flicker of telepathy or clairvoyance or precognition, and in this universe probably a good third of baseline humans have some clairvoyant abilities, whether they know it or not. She’s had to build up her clientele’s confidence not based on any particular powers but solely because she’s very good at her job. Edmund St. James Ruthven is about four hundred and thirty-something, depending on how you calculate it, and he is still extremely salty about the liberties taken by Polidori in The Vampyre, which he contends is libellous in the extreme as well as getting the taxonomy wrong (he’s a classic draculine, a vampire, unlike Varney, who’s a member of a slightly different subspecies, a vampyre). Sir Francis Varney, of the lunar sensitive subspecies, is a severe melancholiac with a beautiful voice and a rapidly expanding outlook on unlife. Fastitocalon, aka Frederick Vasse, used to be a demon until a management shakeup in the 1600s, and is sort of still one of that crew, although rather noticeably changed by his sojourn on Earth as varying forms of clerk and accountant; prefers to call his health problems “chronic bronchitis” rather than “COPD” because the latter sounds like a law-enforcement agency. August Cranswell is, like Greta, entirely human, but tangentially associated with the vampires due to his ancestors’ encounter at Croglin Grange, and mostly what he wants out of life is to get a promotion from junior curator at the British Museum. The others – you’ll have to read and see.

DJ: What is the world and setting of the Dr. Greta Helsing series like?

Vivian: The verse doesn’t really have a name as such. It’s pretty much our own world, with the addition of the fact that magic, monsters, ghosts, demons, angels, etc., are real and existing among us right now. We just don’t know about it, because they take very specific pains to keep that quiet.

DJ: I’ve heard that you created quite a unique magic system! Could you tell us about it?

Vivian: I would love to! The basic conceit is that magic and physics behave similarly enough so that terminology and concepts applicable to one are applicable to the other (see Clarke’s third law, applied in reverse: sufficiently advanced technology is indistinguishable from magic). In my version, there are multiple planes of existence that make up the fabric of reality. On the prime-material plane, the one where humans exist, matter is described as molecules made up of atoms that behave in certain very specific ways. On the planes above that, though, the same matter is described in terms of a different type of particle – the esson, sometimes called the reality particle by the kind of metaphysical scientists who like to use cool names. The science of measuring, identifying, and predicting the activity of essons (and the subsequent use thereof) is called not magic but mirabilics. Individual essons are made up of subessonal particles held together by the strong and weak mirabilic forces, and their behavior is described in classical mirabilic equations. Hell has a dedicated research facility, the Particle Mirabilics Laboratory, in which cutting-edge research is being done to push the limits of knowledge about the nature of existence itself.

DJ: What was your favorite part about writing Strange Practice?

Vivian: Getting to include characters from classic vampire literature, my own experiences, other topics I’m fascinated by – I love the history of electronics – and a wide range of creatures into a world which generally ends up asking a simple question: what does it mean to be a person?

Vivian: Probably the re-imagining of characters from classic vampire lit into a modern setting – and the way I’ve approached the nature of vampires and vampirism in the first place. What’s different about my story is that I’ve tried to answer the question what would happen if monsters existed – but for the most part just wanted to get on with it and live a quiet and unmolested unlife? The majority of vampire stories feature a monster who’s basically trying to get caught, if you look at the risk levels of their behavior. I wanted to explore what sensible vampires might look like in the modern everyday world.

DJ: Did you have a particular goal when you began writing the Dr. Greta Helsing series? Strange Practice is only the first book, but is there a particular message or meaning you are hoping to get across when readers finish it? Or is there perhaps a certain theme to the story?

Vivian: I didn’t set out for there to be a meaning or a purpose, but I think one emerged on its own. At one point during the story Greta is asked why do you do this job? Her answer kind of encapsulates the premise, the import of the series – which I’ve given you below. Mostly it’s all about what identity really means, and how unimportant it can be compared to found family: it doesn’t matter what you are, or what you’ve been made to be, you are in charge of what you will become.

DJ: When I read, I love to collect quotes – whether it be because they’re funny, foodie, or have a personal meaning to me. Do you have any favorite quotes from Strange Practice that you can share with us?

Vivian: Greta, explaining why she does what she does, to Varney:

“You are not human,” she said, at last, “but you are people. All of you. The ghouls, the mummies, the sanguivores, the weres, the banshees, the wights, the bogeys, everyone who comes to me for help, everyone who trusts me to provide it. You are all people, and you all deserve medical care, no matter what you do or have done; and you deserve to be able to seek and receive that care without putting yourselves in jeopardy. What I do is necessary, and while it isn’t in the slightest bit easy it is also the thing I want to do more than anything else in the world.”

DJ: Now that Strange Practice is released, what is next for you?

Vivian: I’m busy writing Dreadful Company, the sequel! I have a couple of short stories on various burners as well, which is a little new for me – I’ve never been able to write short stories before, but apparently some switch has now been flipped.

DJ: Before we go, what is that one thing you’d like readers to know about Strange Practice and the Dr. Greta Helsing series that we haven’t talked about yet?

Vivian: I would like to officially state for the record (and with a heartfelt J emoji) that I originally wrote the book which would become Strange Practice back in 2004 as a National Novel Writing Month entry – and in it I mentioned vampires driving Volvos, which I think skates in juuuust before Stephenie Meyer’s Twilight series Vampire Volvo of Great Justice (hat-tip to Cleolinda Jones and the Movies in Fifteen Minutes recap series: http://m15m.livejournal.com/19551.html). Meyer did the concept beautifully and I salute her — and Ruthven’s Volvo is not even slightly classy: it’s one of those ancient 240-series station wagons, in that shade of pale yellow reserved for Volvos and particularly concentrated eggnog.

Vivian: Mostly I want to thank the readers who’ve come along with me through the years I’ve been writing fanfic, and welcome everyone else who’s new to my work – and I hope you stay tuned, because this universe has some pretty amazing things in store. Next up: edgelord vampires in leather pants, details of subterranean Paris infrastructure, M.R. James monsters, and frank discussion of the nature of reality.

*** Strange Practice is published by Orbit and is available TODAY!!! *** 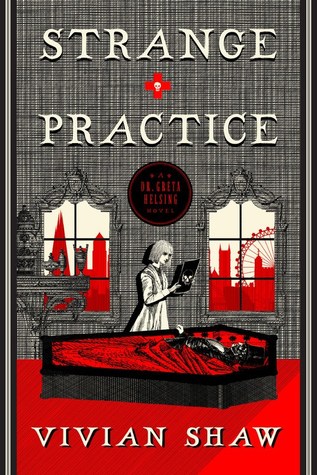 Meet Greta Helsing, fast-talking doctor to the undead. Keeping the supernatural community not-alive and well in London has been her family’s specialty for generations.

Greta Helsing inherited the family’s highly specialized, and highly peculiar, medical practice. In her consulting rooms, Dr. Helsing treats the undead for a host of ills – vocal strain in banshees, arthritis in barrow-wights, and entropy in mummies. Although barely making ends meet, this is just the quiet, supernatural-adjacent life Greta’s been groomed for since childhood.

Until a sect of murderous monks emerges, killing human and undead Londoners alike. As terror takes hold of the city, Greta must use her unusual skills to stop the cult if she hopes to save her practice, and her life.

Vivian Shaw was born in Kenya and spent her early childhood in England before relocating to the US at the age of seven. She has a BA in art history and an MFA in creative writing, and has worked in academic publishing and development while researching everything from the history of spaceflight to supernatural physiology. In her spare time, she writes popular fanfiction for Star Wars, Marvel, Discworld and more under the name of Coldhope.