Today I am interviewing Kay Kenyon, author of the new historical fantasy novel, At the Table of Wolves, the first book in her Dark Talents series. It’s published by Saga Press and received a starred review in Publishers Weekly.

DJ: Hey Kay! Thanks for agreeing to do this interview!

Kay Kenyon: Thanks for inviting me, DJ! I live in Washington state on the sunny side (yes, there is one!) with my husband Tom. I’ve written 14 science fiction and fantasy novels including The Entire and The Rose quartet. Last year, I served as a judge for the World Fantasy awards and lost about three months of my life living in other people’s universes. I came out the other side, amazed and addicted to caffeine. Tom and I have three children and a tabby cat. The cat is still bunking with us.

DJ: What is At the Table of Wolves about? 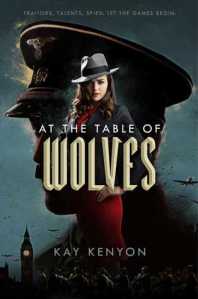 Kay: It’s a spy thriller of dark powers, Nazi conspiracies and espionage set in 1936 England. In this alternate history, the Nazis have been weaponizing psi-Talents in preparation for the next war. England’s Secret Intelligence Service is desperate to uncover the details of an invasion plot that may be based upon a newly-discovered super power. It’s Tinker Tailor Soldier Spy meets X-men, with a strong female hero commanding psi powers both subtle and scary.

Kay: My major character is Kim Tavistock, a woman with a super power that is valued by the secret intelligence service: a gift for hearing truths people want to hide. (A Talent called the spill.) Raised in America but born in England, Kim is now back in the country of her birth, struggling to reconcile life with a Talent that most people resent and one that could get her killed. Having lost her beloved older brother in World War I, she is disturbed to find that the English–and particularly in the salons of aristocratic fascists–seem blind to the Nazi threat. When she meets a charming and dangerous German intelligence officer, Erich von Ritter, she is on her own in combating a looming invasion. Other characters: Julian, her father, who may be a traitor; Alice, whose Talent of trauma view exposes the dark side of peoples’ lives; and Rose, a developmentally disabled young woman who may hold the key to a mysterious power over ice and cold.

DJ: What is the world and setting of the Dark Talents series like?

Kay: The series takes place in a recognizable 1930s European environment, where fascism is on the rise and psi-powers are wielded by all sides in a dangerous game of espionage. Meta abilities are somewhat rare and societies in the West struggle to accept the idea of a Talented few, as well as the equalizing influence that such Talents have for women. I chose the Great War–and its catastrophic suffering–as a point of departure from the historical time line. Now, with German success in weaponizing Talents and with an accelerated Nazi plan for dominance, everyone’s loyalty and commitment are challenged as the powers face off, first in a shadow war, and then with the Third Reich’s operation to invade England.

DJ: What was your favorite part about writing At the Table of Wolves?

Kay: Deception, lies, misdirection, betrayal. In other words, the world of espionage! The tradecraft of the intelligence services is fascinating, with its cyphers, codes, undercover agents, dead drops, couriers, double agents and the moral and ethical quicksand of spying. Above all, secrecy–which, for intelligence agents, becomes a sort of religion. Also: having fun with the aristocracy and their preoccupation with “bloodlines, mares and heirs.”

DJ: Before we go, what is that one thing you’d like readers to know about At the Table of Wolves and the Dark Talents series that we haven’t talked about yet?

Kay: A thread in the novel exploring the theme of how fascism can start and be fueled by initially small curbs to tolerance and freedom.

*** At the Table of Wolves is published by Saga Press and is available TODAY!!! *** 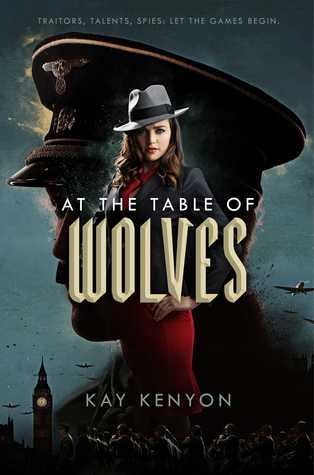 Tinker Tailor Soldier Spy meets X-Men in a classic British espionage story. A young woman must go undercover and use her superpowers to discover a secret Nazi plot and stop an invasion of England.

In 1936, there are paranormal abilities that have slowly seeped into the world, brought to the surface by the suffering of the Great War. The research to weaponize these abilities in England has lagged behind Germany, but now it’s underway at an ultra-secret site called Monkton Hall.

Kim Tavistock, a woman with the talent of the spill—drawing out truths that people most wish to hide—is among the test subjects at the facility. When she wins the confidence of caseworker Owen Cherwell, she is recruited to a mission to expose the head of Monkton Hall—who is believed to be a German spy.

As she infiltrates the upper-crust circles of some of England’s fascist sympathizers, she encounters dangerous opponents, including the charismatic Nazi officer Erich von Ritter, and discovers a plan to invade England. No one believes an invasion of the island nation is possible, not Whitehall, not even England’s Secret Intelligence Service. Unfortunately, they are wrong, and only one woman, without connections or training, wielding her talent of the spill and her gift for espionage, can stop it.

Kay Kenyon is the author of over a dozen science fiction and fantasy novels. Her science fiction books include The Entire and The Rose quartet, Maximum Ice, and The Seeds of Time. Her fantasy novels are: At the Table of Wolves, Book 1 of the Dark Talent novels,  A Thousand Perfect Thingsand Queen of the Deep.

Her novels have been nominated for the Philip K. Dick Award, the Endeavour Award, the John W. Campbell Award and have been twice nominated for the American Library Association Reading List Awards. Her short fiction has been published in numerous anthologies and magazines as well as several best of the year collections. Five of her short stories are available on Amazon.com as stand alones.

Her latest work, At the Table of Wolves, is a historical fantasy novel set in 1936 England. From Saga Press (an imprint of Simon & Schuster), it is the story of dark Talents, Nazis and espionage–offering up a dramatic and slightly-altered history of the run-up to WW2. It will be followed in April, 2018 by the second in the fantasy spy series, Serpent in the Heather.

She is a founding member of the Write on the River conference and organization in Wenatchee, Washington. Among other activities, each May the organization runs a full-spectrum writing conference with workshops and a master class.

She and her husband split their time between Wenatchee and Southern California, both desert environments which she claims is the best environment for story ideas.