DJ: Hey Gabriele! Thanks for agreeing to do this interview! 🙂

Gabriele Russo: Sure. I am a French-Canadian who loved the English language so much she just had to write in it J Seriously, I tried writing novels many times, but until I was introduced to British humorous fantasy, it never quite clicked. While cynical, I prefer to have an optimist outlook on life and I think laughter is the best medicine for the world’s woes – evil never fares well against ridicule – and also the best way to show its absurdities.

DJ: What is Inclement Gods and also the Gods Inc. series about?

Gabriele: The running theme of the series as a whole is man’s complicated relation with his gods, especially in regards to the mercantile aspects of religion. In Inclement Gods, I poke at ideological extremism, the kind that leads to terrorism; except I flip it around from what’s happening in this world and give the role to atheists (my world being full of actual gods – they are the minority rebelling against the status quo). I also explore the politics that come from fighting such a foe.

And that sounds soooo serious – it isn’t really. By focusing more on the heroes’ bumbling efforts to stop the terrorists, I tried to keep it light and funny.

DJ: What were some of your influences for the Gods Inc. series?

Gabriele: Always I must mention Douglas Adams and Terry Pratchett, as they are the two authors who made me want to write. Then there’s my usual suspects list: Goscinny, Umberto Eco, Rabelais, Lewis Carroll, Christopher Moore, and Joss Whedon. And above all, Scott Adams and Tom Holt deserve special mention for the spirit of the series.

Gabriele: Queen Louhi (the vampire CEO of God’s Inc.) is the sensible little dictator hiding inside all of us… Also, she’s on a perpetual diet, something I personally can relate to. Andrew is the impatient older person who has little tolerance for stupidity, yet feels bemused by the changing times. I must admit Mysantheos freaks me out, but since he’s the villain I guess that’s ok. I enjoy Jupiter a lot, he’s just so, so dumb, and Loviatar (Louhi’s mother), she’s a fun psychopath. Lara and Richard are the two humans, and opposites: Lara is strong, competent, and confident, but things never quite work the way she wants. As for Richard, he is totally out of his depth, a regular guy thrown into a situation he has no idea how to handle.

DJ: What is the world of the Gods Inc. series like?

Gabriele: It’s a lot like ours, except it has gods in it. It’s a universe that split from ours two thousand years ago. The ancient religions were on the decline, so the gods created a spin-off and decided to live with the humans so they wouldn’t stop believing in them again. The geography is similar, except that the gods took the Island of Atlantis with them, but countries span entire continents and are usually ruled by monarchs. There are two main differences: religion has become a lot more pragmatic (it’s not faith if you know the god exists), and the existence of magic, which is like the carbon emissions of gods.

DJ: How have the reviews been from readers, bloggers, and reviewers for the first book, Incompetent Gods, in the Gods Inc. series? Is there anything that your audience seems to be particularly enjoying or is eager to find out more about?

Gabriele: They have been good, although too few – quality vs. quantity, I guess. People seem to enjoy the ironical perspective on gods they are used to seeing in more serious settings.

DJ: Now, what do you think readers will be talking about most once they finish Inclement Gods?

Gabriele: I hope it starts a reflection on the idea that it doesn’t matter whether what you believe (or don’t believe) is right if you are willing to hurt others to impose your convictions. We should always embrace the possibility that we are wrong.

DJ: What was your favorite part about writing Inclement Gods?

Gabriele: I enjoyed writing the scene where Jupiter, Anubis and the Sheela-Na-Gig go to hell to get a god out – they meet Cerberus and Quetzalcoatl, for whom I invented an assistant, Qrapchipotl. It was also fun inserting the Quebec element within the story – Quebecers are the terrorists, angry at their constant bad weather (this is especially fitting this year).

DJ: Did you have a particular goal when you began writing the Gods Inc. series? Inclement Gods is on the second book in the series, but is there a particular message or meaning you are hoping to get across when readers finish it? Or is there perhaps a certain theme to the story?

Gabriele: Of course, every book betrays some of my opinions, but mostly I just want people to have fun reading them. If however it sparks a thought or two, or even, gods willing, a more profound reflection about addressing the absurdities of our society, I certainly won’t complain.

DJ: When I read, I love to collect quotes – whether it be because they’re funny, foodie, or have a personal meaning to me. Do you have any favorite quotes from Inclement Gods that you can share with us?

Gabriele: I’m absolutely terrible at choosing quotes – this I learned from twitter – I always run them too long, but here are a few:

She knew from experience not to trust fanatics half as far as she could throw them. Or even a tenth.

“Hem, if I may object.” Anubis’s ears were lying low. “Do you have any idea what kind of havoc genocide creates in my department? Overtime takes on a whole new meaning.”

Deprived of divine inhabitants (gods being gods, they are usually better off than this), the fantastic constructions are losing cohesion under the pressures of natural physics. This is the neighborhood of the forgotten, and someone is forgetting very hard.

“Oh, I bloody would [blow your head off]. Granted, Her Majesty and I might quibble for a split-second about the fact that you weren’t actively trying to escape, but in case you didn’t notice earlier, she’s not quite as protective of you now.” ¾ Andrew

The poor guy had been sucked like a Mr. Freeze. Loviatar was humming and picking her teeth with a fingernail.

When she saw Lara’s glance at the remains, she stroked her waist. “Epidermis is very fattening, and polyester gives the worst heartburn.”

Mars lost his unusual poise. “Enough! We don’t need anyone to take the minutes. We’ve been here for hours and we still don’t have any minutes!

DJ: Now that Inclement Gods is released, what is next for you?

Gabriele: Right now, I’m working with my editor on the third book, Incoherent Gods, and in between editing rounds, I am translating Incompetent Gods in French, so the next step will be finding a publisher for that. I’ve also started taking notes for a fourth Gods Inc. novel and I’d like to go back to a memoir-type book I had started to write about my father.

DJ: Before we go, what is that one thing you’d like readers to know about Inclement Gods and the Gods Inc. series that we haven’t talked about yet?

Gabriele: I think I’m wrung out; that was a very comprehensive and thought provoking interview. Thanks.

*** Inclement Gods is published by Fiery Seas Publishing and is available TODAY!!! *** 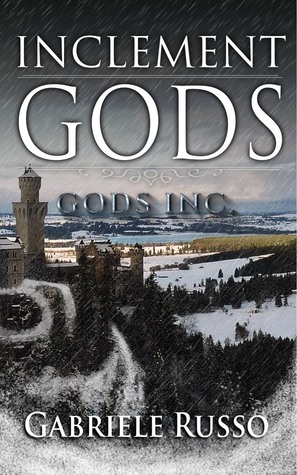 When you live in a world pullulating with gods, can you truly be an atheist? Well, yes…if you know a way to get rid of them. Mysantheos, a fanatic atheist at the head of a powerful lobby/terrorist organization, has created a weapon able to kill gods and his kamikaze army is ready to attack.

As the divine bodies pile up, resentment builds at Gods Incorporated and violent factions start pushing for the extermination of the human race, and the CEO/Queen Louhi is running out of ideas to calm them down. Hopefully, her black ops teams are doing better. But will the Nerds and Richard (a down-on-his-luck private eye), saddled as they are with a group of angry gods, manage to find
Mysantheos before all hell breaks loose?
.

Gabriele Russo was born in Quebec City amidst a family of book lovers – her father had dreamed of being a writer and both of her brothers are published authors.
Since she earned her Bachelor’s in History, it was no surprise (except to her) that she ended up working in restaurants, eventually owning two, which almost drove her mad. She sold them and was nursed back to pseudo-sanity by Douglas Adams and Terry Pratchett.
That’s when she answered the family calling and decided to write. Armed with her ideas for the Gods Inc. series she went back to University and got her Master’s in Creative Writing.
She now lives with her husband in Virginia, where she divides her time between painting, teaching French and Creative Writing, playing tennis and, of course, writing more books.