Today I am interviewing David Boop, editor of the new anthology, Straight Outta Tombstone. He’s also the author of the sc-fi/noir novel, “She Murdered Me with Science” from WordFire Press and co-author of the bestselling Kindle Worlds title, “Veronica Mars: Fast Times at Neptune High.” Additionally, David worked on the upcoming Flash Gordon RPG for Savage Worlds.

DJ: Hey David! Thanks for stopping by to do this interview!

David Boop: Thanks, DJ. Ironically, both my ex-wife and my son have the initials DJ, and I was a DJ in the 80s and 90s. LOL! SO, I was the man of a thousand jobs. I was restless through my youth and my recessed adulthood, switching jobs working three jobs at a time, then switching them for other jobs. I’ve been a DJ, an actor, a film critic, a store manager (books, videos, video games, comics, movie theaters… the list goes on,) a Beetlejuice impersonator, a journalist, an Editor-in-Chief, a steam spa salesman, a mapmaker, a mock juror, a night stalk—stocker.

I always wanted to do something creative. I thought it would be in film, but after two failed attempts at short films (both available on YouTube,) I finally found my calling as a fiction writer. I’d been a geek/nerd/dork since before I knew what it was. But I really Came into my own, like much of my generation, with Star Wars and the obsession that followed.

DJ: What is Straight Outta Tombstone about?

David: It’s a collection of weird western tales written by 14 of today’s hottest authors. I have eight bestselling scribes that have been, at some point, mentors of mine, and then I pulled the rest from the best of the best of my peers. They all gave me amazing stories, many set in their most famous worlds, like Monster Hunter International, Dresden Files, Dan Shamble and the like.

DJ: What were some of the inspirations behind Straight Outta Tombstone?

David: I have been writing weird westerns for over ten years and I wanted to eventually leave my brand on the genre as an editor. I started collecting authors who I thought had something to say about the old west, and I got lucky with the people who said yes.

If we’re talking theme, what I wanted were the original gangsters, much as the title implies. I wanted drive-by carriage shootings, gray justice, people rising against all odds to face enormous odds, and then I wanted to add aliens, demons, and dinosaurs, because really, what story isn’t made better with those things?

DJ: What kinds of stories readers expect in the collection?

David: I tried to balance the genres, even though there are three stories with zombies (one is the protagonist, so I don’t count him as an actual zombie, more like a breathing impaired) and two stories with time travel, they are decidedly different. A reader will find horror, sci-fi, paranormal, steampunk, fantasy, comedy and a con job for the ages. I also wanted different POVs, so you’ll find a diverse group of authors and stories. What I didn’t want were stories that were didactic/preachy. Each told a story that could have easily been a legend from the old west.

DJ: Being an editor, what do you believe makes a good science-fiction and fantasy story?

David: I don’t know where I got the quote from, who told me it forst, but I’ve always believed “sell me on your reality first, before you sell me on your fantasy.” I need to feel that these people and situations are as real as the dragons, elves and crystal skull aliens in the story. I do a painstaking amount of research on my weird western stories, and I expect in most cases, these authors did, too. My next editing job will be pulp heroes and the cities and people in those will need that same aspect. What’s the good of a person with superpowers in a city no one believes exists?

DJ: This may will be a difficult question to answer, but what were some of your favorite parts from the stories in Straight Outta Tombstone? I don’t mean what you believe is the best story, but perhaps some stories has a particular setting, theme, message, or character that you stood out to you?

David: Sam Knight’s story has three moments that still resonate with me. Phil Foglio’s ending makes me laugh every time I read it. Peter Wack’s caper piece is like a Russian doll, that each time you open a section, you find another surprise inside. Jody Lynn Nye’s story is everything I wanted for the anthology including a character I could fall in love with, both on the page and in real life if it was ever turned into a short film. David Lee Summer’s tale of fatherhood hit me in the feels. Bob Vardeman’s story of obsession told a better story of a Crystal Skull hunt than the last –not-to-be-named adventure hero’s film (and we had both done a lot of similar research on Native American origin stories, which is cool!) And Naomi Brett Rourke is this amazing talent I thought I’d never find. She weaves a tale of patience and revenge, that doesn’t feel like a tale of revenge. That’s a gift.

DJ: What was your favorite part about editing Straight Outta Tombstone?

David: Getting a story from Alan Dean Foster, the first author I ever read a whole novel of as a child. He’s been my idol, my mentor, my friend for many years, but I was still nervous about asking him for a story. I thought he’d pull something from a trunk and dust it off, but he didn’t. he wrote something for me. Me! Who am I? This was my first editing job, and I had to tell him I didn’t like the title he originally picked. I thought I’d have a heart attack when I hit send. And yet, he sent back an e-mail for six other names for me to choose from.

David: Oh, let’s face it. Larry and Jim hot it out of the park with their stories. They are giving their fans exactly what they want, which was what I asked for. They take us back to the origins of the worlds and both wrote fun stories laced with enough surprises that I’m already getting demands for more (and if I am, imagine what they’re dealing with?)

DJ: Now that Straight Outta Tombstone is released, what is next for you?

David: I’m editing an anthology of classic pulp heroes written by today’s hottest superhero authors. I can’t say more than that before the Kickstarter launches, but let’s just say, you will never have seen these authors writing these characters in this way ever before. And speaking of Kickstarters, I will be part of a Kickstarter for the Flash Gordon RPG for Savage Worlds announcing soon. Also from PEG, I have a Victorian Horror novel, “The Soul Changers” due out based on the RPG, “Rippers Resurrected.” Additionally, I’ll be writing a story for the shared-world multimedia event called “Jeff Sturgeon’s Last Cities of Earth.” Finally, Peter Wacks and I have co-written a Predator story that will be featured in the upcoming 30th Anniversary anthology, “Predator: If It Bleeds.”

DJ: Before we go, what is that one thing you’d like readers to know about Straight Outta Tombstone that we haven’t talked about yet?

David: I worked really hard to give every reader something to enjoy in this. It’s not about painting a picture of the whole, but of the choices one made back then, both good and bad. Some of these characters are heroes, some do their level best not to be. It’s about seeing the Old West through new eyes. It was a dangerous place just on its own, but with these little “additions” it’s a whole lot more. Please, even if you buy it for the big names on the cover, try out the others. Everyone of them is a well-written, well researched story written by authors who love what they do.

David: Thanks for having me. It was a blast!

*** Straight Outta Tombstone is published by Baen Books  and is available TODAY!!! *** 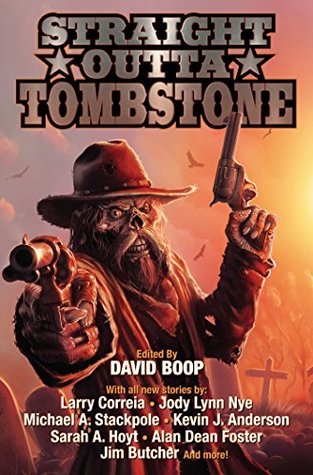 Tales of the Weird Wild West. Top authors take on the classic western, with a weird twist. Includes new stories by Larry Correia and Jim Butcher!

Come visit the Old West, the land where gang initiations, ride-by shootings and territory disputes got their start. But these tales aren’t the ones your grandpappy spun around a campfire, unless he spoke of soul-sucking ghosts, steam-powered demons and wayward aliens.

Here then are seventeen stories that breathe new life in the Old West. Among them: Larry Correia explores the roots of his best-selling Monster Hunter International series in “Bubba Shackleford’s Professional Monster Killers.” Jim Butcher reveals the origin of one of the Dresden Files’ most popular characters in “Fistful of Warlock.” And Kevin J. Anderson’s Dan Shamble, Zombie P.I., finds himself in a showdown in “High Midnight.” Plus stories from Alan Dean Foster, Sarah A. Hoyt, Jody Lynn Nye, Michael A. Stackpole, and many more.

This is a new Old West and you’ll be lucky to get outta town alive!

David Boop is a Denver-based speculative fiction author. He’s also an award-winning essayist, and screenwriter. Before turning to fiction, David worked as a DJ, film critic, journalist, and actor. As Editor-in-Chief at IntraDenver.net, David’s team was on the ground at Columbine making them the first internet only newspaper to cover such an event. That year, they won an award for excellence from the Colorado Press Association for their design and coverage.

His novel, the sci-fi/noir She Murdered Me with Science, returns to print from WordFire Press after a six-year hiatus. Additionally, Dave is prolific in short fiction with over fifty short stories and two short films sold to date. While known for weird westerns, he’s published across several genres including horror, fantasy, and media tie-ins for The Green Hornet, The Black Bat and Veronica Mars. His RPG work includes Interface Zero, Rippers Resurrected and Deadlands: Noir for Savage Worlds. David regularly tours the country speaking on writing and publishing at schools, libraries and conventions.