DJ: Hey Rajan! Thanks for agreeing to do this interview!

Rajan Khanna: I’m a writer living in Brooklyn. My first story was published almost 10 years ago and I’ve been plugging away ever since. In addition to writing fiction, I also have written articles and reviews for sites like Tor.com and LitReactor and I’ve also done story narrations for sites such as Lightspeed, Beneath Ceaseless Skies, Podcastle, Escape Pod, Pseudopod, and Starship Sofa. I’m also a musician, a craft beer enthusiast, and a roleplayer.

DJ: What is Raining Fire and then the Ben Gold trilogy about?

Rajan: The books take place in a near alternate post-apocalyptic future where a global pandemic has resulted in much of the population regressing into an animalistic, violent state (these are referred to as Ferals). The disease spreads rapidly, transmitted by fluids, and some of the surviving individuals have taken to living in the air, on airships (more plentiful in this world) and in floating cities.

The series focuses on Ben Gold, a cynical airship captain and forager and Miranda Mehra, a scientist looking for a cure. Miranda manages to convince Ben to join the cause, though it’s something he struggles with.

In Raining Fire, we start with Ben at a low point after the catastrophic events of the previous books. He’s lost almost everything at this point and is on a slow slide to ruin. Haunted by the past, he tried to find some final closure, even if it kills him, but a chance encounter with a ragtag group of survivors alters his course.

DJ: What were some of your influences for the Ben Gold trilogy?

Rajan: To a certain degree, it all comes down to Star Wars in the end. That was the first big story that had an impact on me. Ben has some Han Solo in him. Miranda has some Leia. But being post-apocalyptic fiction, I’ve drawn on a lot of those classics for inspiration — Walking Dead, for example, and the Mad Max movies, particularly Fury Road during the time of these books. There’s also a touch of Western to the books, mostly around Ben. And, of course, airships influenced me and became a big part of these books and their world.

Rajan: I’ve actually been told that Ben isn’t a very sympathetic character and I get that. I don’t feel quite that way, but he’s a character who grew up in a very harsh world and who has been dominated by fear for most of his life. He is however, a good pilot and a survivor and, for the most part, tries to do the right thing. But he’s a broken man in many respects.

Miranda, on the other hand, is an idealist. She runs on hope and believes in the idea of a cure for the virus. She is a brilliant scientist but also a believer in helping people and trying to save people. And she can drink almost anyone under the table.

DJ: What is the world and setting of the Ben Gold trilogy like?

Rajan: As mentioned, it’s post-apocalyptic. The virus (which most people simply call “The Bug”) wiped out civilization. People live in pocket settlements, but it’s a fearful world. The virus spreads so easily, and it takes 2-3 days to express so there’s no telling if the stranger that you meet is infected already or not. So it’s not a welcoming world.

Some of the people, referred to as “zeps”, live in airships, floating above the more dangerous ground, or in flying cities. One of these cities, Valhalla, over the city of Chicago, is home to a violent, militaristic group that has, as of the third book, been destroying or seizing smaller settlements.

Miranda and her people have banded together, scientists still holding onto information from before the pandemic, to try to find a cure, but they are a small group and limited by their resources. They are opposed in their efforts by a group she refers to as “The Cabal,” a group of scientists seeking to use the virus and their knowledge of it for their own benefit.

DJ: How have the reviews been from readers, bloggers, and reviewers for the first two books of the Ben Gold trilogy? Is there anything that your audience seems to be particularly enjoying or is eager to find out more about?

Rajan: I’ve been really happy with the feedback that I’ve received for the books to date. I did get some consternation at ending the 2nd book on a cliffhanger, but I feel better now that the conclusion is available. One of the things people seem the most receptive to is the addition of Miranda’s POV in Rising Tide. Falling Sky was all Ben’s POV, but I wanted to give Miranda a spotlight in the second book and readers seem to have responded to that.

DJ: What was your favorite part about writing Raining Fire and completing the final book in the Ben Gold trilogy?

Rajan: Two things, really. One was really taking a deeper dive into the characters and taking them to places that I hadn’t before, even when those places were unpleasant. And the other was trying to increase the sense of adventure. There is one sequence in particular, with Ben in a recently bombed settlement, that was incredibly fun to write. I won’t spoil it, but there’s a story moment there that ended up being one of my favorite in the series involving something called “The Monster”.

Rajan: I hope they talk about how it was a fitting and satisfying end to the series. I also hope they feel like it was a mix of fun adventure and compelling dramatic moments. But I think they will be talking about “The Monster.”

DJ: Did you have a particular goal when you began writing the Ben Gold trilogy? Was there a particular message or meaning you are hoping to get across when readers finish it? Or is there perhaps a certain theme to the story?

Rajan: I didn’t start writing with a goal or theme in mind, but one of the elements of writing in a post-apocalyptic world is imagining how people would deal with such a harsh environment. Imagining what that fear and constant fight for survival would do to people and how hope might survive in such a place. It was by no means intentional, but the election was going on during a large part of my writing this novel and the results of the election coincided with the last edits. I found myself as a result thinking about what it is that makes people want to fight injustice and how they find the will to do so.

Rajan: I didn’t have a good sense of how the series would play out, to be honest. I knew in broad strokes where I wanted the world to be by the end of the series (and where I didn’t want it to be). And that stayed pretty much the same. But the character arcs presented themselves as I went. I will say that certain characters ended up popping up and becoming bigger parts of the story than I anticipated. If anything, all the disparate pieces that I originally came up with ended up fitting together quite nicely and suggested a path forward. But it took some time for that to happen.

DJ: Now that Raining Fire is released, what is next for you?

Rajan: I am, as usual, working on several different projects. At the moment I’m working on some short stories now that I have the time. But I have a YA novel in the works and several other novels including a weird western.

DJ: Before we go, what is that one thing you’d like readers to know about Raining Fire and the Ben Gold trilogy that we haven’t talked about yet? 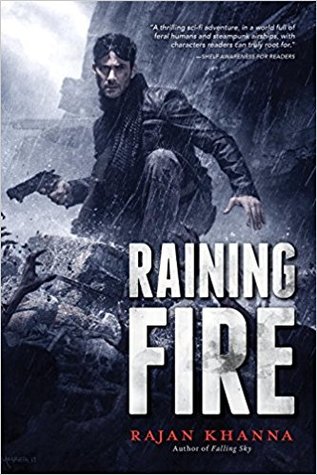 Ben Gold, former airship pilot has lost everything: his airship, his friends, and Miranda, the woman he loves. All that he has left is a thirst for revenge, a reckless plan to sate it, and some journal entries from Miranda to help ground him in the chaos. As he spirals out of control, he must survive old friends, new enemies, and of course Ferals, the mindless, violent victims of the global pandemic that shattered the world.

Meanwhile, the Cabal, a group of scientists on the floating city of Valhalla, are using the disease as a weapon while the militant Valhallans continue their raiding and destruction across the continent. When raiders from Valhalla massacre a town of innocents, Ben finds a new purpose in doing anything he can to undermine their power.

Ben must reunite with old friends and find new ones if he is to succeed. Can he overcome the forces arrayed against him in time to save himself—and maybe the world?

Rajan Khanna is a fiction writer, blogger, reviewer and narrator. His first novel, Falling Sky, a post-apocalyptic adventure with airships, was released in October 2014 from Pyr. A sequel, Rising Tide, came out in October 2015. His short fiction has appeared in Lightspeed Magazine, Beneath Ceaseless Skies, Shimmer, and several anthologies. His articles and reviews have appeared at Tor.com and LitReactor.com and his podcast narrations can be heard at Podcastle, Escape Pod, PseudoPod, Beneath Ceaseless Skies and Lightspeed Magazine. Rajan lives in New York where he’s a member of the Altered Fluid writing group. He is represented by Barry Goldblatt of the Barry Goldblatt Agency.