DJ: Hey Wendy! Thanks for agreeing to do this interview!

Wendy Hammer: Hi! Sure thing. My go-to three word introduction is: Reader, Writer, Weirdo. It covers most of the bases. I’ve been a voracious reader almost my whole life and I love to write. This is handy because I teach English at a community college for a living. The weirdo part speaks to personality, I suppose. I like eccentrics, oddities, and quirk. I’m a geek. I will talk about Dragon Age, Hannibal, Nimona, and other favorites all day long.

DJ: What is the Cross Cutting series about?

Wendy: It’s about Trinidad O’Laughlin, a woman who can magically bond with a territory in order to protect it, and her search for a home to call her own. She comes to Indiana in response to a cry for help and in hopes of reconnecting with an old friend. There, she confronts waves of murderous monsters who travel through cuts between our world and their own. Each major story in the collection focuses on a different cut and a new piece of the puzzle. The second section of the collection is from her friend Ache’s point of view, but Trinidad never takes a backseat. In the end, it’s her story.

DJ: What were some of your influences for the Cross Cutting series?

Wendy: A mishmash of RPG warden/bard/ranger character classes, Irish and Trinidadian culture, classic punk music, my favorite horror movies, and likely all the other media I’ve consumed over the years.

Wendy: My main characters form a found family and their bonds help them stand against the threats to their world. Trinidad grew up in Ireland and her namesake island—the music, food, language and dance influence her, but she’s looking for a place to belong in America. She keeps her hair natural, her weapons ready, and her boots in perfect repair. Achilles (Ache) Vetrov is a six-foot-six clairvoyant bass player. He prefers peaceful, deliberate conflict management, but when that fails he’s got a pair of brass knuckles. His best friend, Marshall Kim, tells bad jokes, owns a food truck, and helps out with technology. Ache’s sister, Iris, is the owner and artist at Rubber & Glue tattoo. She loves vintage clothing, rocks fuchsia hair and a relentlessly upbeat attitude. She’s balanced by her level headed scientist girlfriend, Yauvani. The final member is Abbot Sweeney, the proprietor of The Craic Piper—an Irish bar and their home base.

DJ: What is the world and setting of the Cross Cutting series like?

Wendy: My urban fantasy is set in contemporary Indiana—specifically in Indianapolis and the Greater Lafayette area—with a few adjustments here and there. Though I’m originally from Wisconsin I’ve lived in Indiana for quite some time. I wanted to work in a place familiar to me—and one that may be new to readers.

DJ: Has anything special or new been added to the omnibus?

Wendy: Yes! There are two new short stories: “Snow Day” and “All Your Fears.”

DJ: What are those about?

Wendy: “All Your Fears” is a darker story, more influenced by horror. A series of improbable deaths pushes Trinidad to investigate and find the culprit before fright gets its claws in too deep. “Snow Day” features one of my favorite supporting characters. She’s so much fun to write. Iris and her guest are enjoying a summer Snow Day until the supernatural crashes the party. The women must harness their own strengths to save the day.

DJ: How have the reviews been from readers, bloggers, and reviewers for the all three books of the Cross Cutting series? Is there anything that your audience seems to be particularly enjoying or is eager to find out more about?

Wendy: *Attempts to duck away from the pressure, slips and falls on face*

I’m thankful for every reader and hope everyone can find something to have fun with. Heh.

DJ: What was your favorite part about writing the Cross Cutting series?

Wendy: I grew really attached to the characters. I also have a great time creating new monsters. I had a blast writing the family dinner scenes. Devising menus, working in a bit of banter, and hatching battle plans made them some of my favorite scenes to write. I also found out I like making up names for fake businesses, especially bars.

DJ: What was your goal when you began writing the Cross Cutting series? Was there a particular message or meaning you are hoping to get across when readers finish it? Or is there perhaps a certain theme to the story?

Wendy: I wanted to write an exciting story featuring a core group of characters who are fundamentally harmonious. Instead of arguing and personal drama, I wanted them to focus on cooperating against the external threat. Given that the monsters tend to attack what makes us human, it seemed fitting. I also wanted to write a story where a woman is a natural leader and everyone in the group is perfectly fine with that.

DJ: This may have skipped some reader’s attentions, but the Cross Cutting series is actually a collection of novellas. It seems to me that novella is gaining a rise is popularity again: what is it about the novella format that you like?

Wendy: I love the balance of the form. There’s room to explore character, develop multiple scenes, and play, but it’s short enough to demand a narrower focus than a novel. It moves quickly and you can read it in a sitting, if you like.

Wendy: The big pieces and goals remained the same. How I got there changed a little bit, but that’s how I like it. I work from an outline broad enough to give me plenty of opportunities to discovery write. I love those “Ooo, that bit could be cool” moments I stumble into.

DJ: When I read, I love to collect quotes – whether it be because they’re funny, foodie, or have a personal meaning to me. Do you have any favorite quotes from the Cross Cutting Omnibus that you can share with us?

Wendy: That’s a tough one. I guess I’d say, it’s the opening line to the first novella: Some days felt like last days.

It echoes throughout the rest of the series. Trinidad faces life-threatening, potentially world-ending dangers and she can sometimes feel these turning point days. On last days she treats herself to some fabulous food (in The Thin it’s the famous shrimp cocktail from St. Elmo’s and a Hendrick’s martini), basks in the sun, and embraces life—so when the darkness comes she can fight it with everything she’s got.

DJ: Now that the Cross Cutting Omnibus is released, what is next for you?

Wendy:  I’m working on a few short stories that will hopefully find a home somewhere eventually and a secondary world fantasy novel.

DJ: Before we go, what is that one thing you’d like readers to know about  The Cross Cutting Omnibus that we haven’t talked about yet?

Wendy: I’m excited about the monsters in the stories—so much so that the individual novellas are named after them. The Thin drive crime scene vans around the city and abduct and terrorize its people. The Hollow are invasive creatures with concave faces and no mercy. Both serve The Marrow—a force determined to make our world its own. I don’t want to give too much away, so I’ll say I was pleased by how they turned out. I love traditional monsters, faerie, werewolves, vampires and all, but I also like new ones to play with.

Wendy:  Just a quick thanks to all the readers and writers out there. Keep being awesome!

Wendy: It was a pleasure. Cheers!

*** Cross Cutting is published by Apocalypse Ink Productions and is available TODAY!!! *** 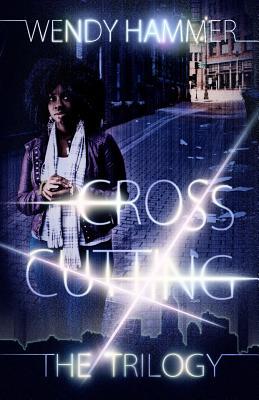 This gritty urban fantasy by Wendy Hammer is an omnibus of three novellas: The Thin, The Hollow, and The Marrow, and features two new short stories.

The Thin: Strange vans roam the streets as people go missing or turn up dead. The city can’t fight the monsters alone. Trinidad O’Laughlin is a guardian looking for a territory to bond with and protect. Indiana’s distress call may give her a chance at one–if she can survive long enough to take it.

The Hollow: Ache Vetrov is clairvoyant and a caretaker of secrets and lost things. When a mysterious wave of violence threatens to overwhelm the city of Lafayette, Ache begins to investigate. He and Trinidad O’Laughlin uncover creatures with concave faces devoid of feeling or mercy. Ache, Trinidad, and their friends must hold strong if they hope to find a way to stop the monstrous invasion before it erases everything.

The Marrow: Trinidad O’Laughlin has people to love and a city to watch over. Lafayette has become a true home. Her newfound peace is shattered when another cut opens in her territory and unleashes the malevolent force behind the previous invasions. Trinidad and her friends must defeat it before the whole world falls to its hunger.

Wendy Hammer grew up in Wisconsin and lives in Indiana. She has degrees in English from The University of Wisconsin-Madison and Ball State University. Her research focus was in gender/identity studies and bodies. Her dissertation was about the intersections of twentieth century infectious disease narratives and imperialist discourse, with a particular focus on Africa. The diss was abandoned, but her interest remains.  She currently teaches introductory literature and composition at a community college.

She writes speculative fiction (fantasy, horror and science fiction) and is an affiliate member of HWA. She has done some freelance writing for an RPG.

Her short stories can be found in Urban Fantasy Magazine, EGM Shorts, Suspended in Dusk, The Shapeshifter Chronicles, and elsewhere. The first two novellas in the Cross Cutting trilogy (The Thin and The Hollow) have been published by Apocalypse Ink Productions.

She reads everything. She indulges in K-drama, horror, and cooking competition show marathons (especially the Great British Baking Show). She likes geeky cross stitch projects, classic punk music, and salted licorice. And finally, she considers both Cobra Commander and The Unbeatable Squirrel Girl to be kindred spirits.