Today I am interviewing Anna Smith Spark, author of the new grimdark, fantasy novel, The Court of Broken Knives, first book in the Empires of Dust series.

DJ: Hey Anna! Thanks for agreeing to do this interview!

Anna Smith Spark: Hello DJ, and thank you for asking me! I’m a British fantasy novelist with a background in classical history and mythology. I’m a (sadly, ex-) D&D player and Warhammer fan – for a couple of glorious years, I studied the Iliad and the campaigns of Alexander the Great all day, then played David Gemmell based D&D all night. In my past lives I’ve been an English teacher, a petty bureaucrat and a fetish model. I have dyslexia, dyspraxia and Asperger’s Syndrome.

DJ: What is The Court of Broken Knives about?

Anna: Aha ha ha. The big question. Broken Knives is my response to the hero myths and legends that I’ve loved since childhood – the Iliad, the Eddas, Beowulf, the Tain, Tolkien. It’s about violence and the cult of the war leader. Why we fight and die, why we follow someone to death. Why human society has always fetishized violence, seen prowess in war as admirable.

It’s basically a fairly standard fantasy set-up: in a decadent city, a nobleman schemes to save his world through violence, hires a company of mercenaries to do the changing. But a member of the company has a dark secret. And violence has a way of getting out of control.

DJ: What were some of your influences The Court of Broken Knives and the series?

Anna: My biggest influences as a fantasy writer are:

Scott Bakker, whose Second Apocalypse series is possibly the greatest, most horrible, most haunting fantasy series I’ve ever read.

Mary Stewart, whose Merlin Trilogy takes the Arthur myth and shows you its domestic reality, the human cost of power and glory and leadership, and who beautifully describes the British landscape that I love.

I’m also very influenced by mythology and folklore. I’ve been lucky enough to hear the opening lines of the Iliad sung in the original Greek, Sir Gawain and the Green Knight in the original old English, I’ve read and reread retellings of the Norse myths. In a very pretentious way, I kind of think of myself as writing mythological fan fic.

My literary style has, um, aroused some comment. I grew up reading T. S Elliot and Ted Hughes, Alan Moore and James Ellroy. It shows.

DJ: Could you briefly tell us a little about your main characters? What makes them compelling?

Anna: My characters …. The book has four major points of view: Tobias, a cyncial sellsword, seen it all, spat in its face, sold it out for cash (cliched? moi?); Orhan Emmereth, a man of learning, a rich man with a conscious, who fears and hopes for a better world; Marith, a young man of self-pitying sorrow; Thalia, the High Priestess of the Temple, a young woman who blazes with life and light. All want to live and find happiness. All make mistakes. All in their way are both pitiful and monstrous, as most of us are if you look into the depths of our souls.

I took some pretty old fantasy archetypes and (I hope) tried to explore their psychology, their inner world, their pain and hope. The stories they tell themselves.

DJ: What is the world and setting of the Empires of Dust series like?

Anna: The Empires of Dust series is set in a continent/world called Irlast. The pseudo-historical setting is Bronze Age and Dark Age mythic – the weaponry is mostly bronze, although iron is also mentioned; it’s clearly a heroic world, Celtic or Homeric, not Medieval. It’s is an ancient world mixture of empires, kingdoms, tribal peoples, city states. At its heart is the ancient city of Sorlost, once the capital of a great empire, now fading to decay. It’s based on Samarkand, the lost cities of the Taklamakan desert, the medieval European fantasies of the great cities of the East and of Imperial Rome. Sorlost is intentionally Orientalist, it’s talking the European fantasy of the ancient East and playing with it, taking it to its extremes, then reading it back.

It’s a violent world. The worlds of the great heroes are violent worlds. But it’s a beautiful world, also. I’m a frustrated nature writer. I love describing the deserts, the forests, the sea, the high dark hills. A lot of the landscape is based on the places I love, the Peak District, Dartmoor, the East Anglian salt marshes.

And it’s a numinous world. I deliberately didn’t create a magic system or a pantheon of gods. There is magic in this world, and gods, demons, nature spirits, preternatural creatures, whatever you want to call them and understand them as. But it’s not defined. It’s all just there, in the land, in the characters’ experiences of the world.

DJ: Anytime I have a “grimdark” author, or novel, or fan on the genre on, I have to ask: What is your definition of “grimdark”?

Anna: There’s a rather depressing misconception that grimdark is just traditional fantasy but with very extremely graphic (sexual) violence. The Lord of the Rings as directed by Paul Verhoeven (actually, now I mention it, I’d so definitely watch that. Kickstarter campaign, anyone?). The Wheel of Time only all the men get tortured and all the women get raped.

Grimdark isn’t about that.

Yes, grimdark needs intense fantasy violence. The most grim, dark book I’ve ever read is Zola’s L’Assommoir, and that’s certainly not grimdark on account of being naturalism about nineteenth century Parisians. But the mere mindless fetishization of violence isn’t grimdark. And it’s not just about showing that ‘good people have flaws’ or ‘right and wrong can be a bit complicated’. Uh, that’s not exactly a huge revelation about human life. By those terms, all human history is grimdark. (Actually, now I mention it …)

The term supposedly originally came from the Warhammer 40k line ‘in the grim, dark future, there is only war’. Grimdark is about showing the reality of that. War is horrifying and evil beyond belief and yet we do it and celebrate it and always will. Everything’s lies. Everything’s rotten. Any possible moral justification you can give me for violence is bullshit. But there’s still love, and pleasure, and happiness, because there’s life.

My alternative, less poncy definition, is that I know it’s grimdark when I get a crush on the protagonist.

DJ: What do you think makes your novel “grimdark”?

It is a very violent book. It’s a bleak book, also. But at its heart it’s about damaged people trying to find happiness. It’s a celebration of life, in some ways. And life has a price. Every act we carry out can harm others.

Broken Knives isn’t about good versus evil. It’s about the violence and hope within the human soul.

Also, I have a massive, massive crush on the protagonist.

DJ: What was your favorite part about writing The Court of Broken Knives?

Anna: The fight scenes are amazing to write, a huge adrenaline rush, the way the prose pours out, this white heat of language. It’s a turn on, basically, yeah. Also the landscape descriptions, painting the world, discovering its beauty and meaning as I write it.

But the most fun bits are the little details, like constructing the language systems. There are a lot of references and what are basically in-jokes in the language systems, it’s a lot of fun playing around with language like that, creating my own vocabularies. I’ve got to the point in book three where you can, if you really work at it, work out the root words at the base of a couple of key character names. I loved doing that.

Anna: The big thing seems to be my prose style. ‘A black metal band playing opera’ is one description that I’ve read and absolutely loved. I’m a stylist. I wanted to describe pure emotion: love, grief, violence, pain. I wanted to write something horrible and beautiful. Some people have absolutely hated the way it’s written. It wasn’t written to be an easy book to read.

DJ: Do you have a particular goal in writing the Empires of Dust series? The Court of Broken Knives is only the first book, but is there a particular message or meaning you are hoping to get across when readers finish it? Or is there perhaps a certain theme to the story?

Anna: Empires of Dust is a trilogy. There’s a single long story line running through the three books, although each novel is also fairly self-contained with a beginning and an end. I’m telling the protagonist’s life story, in true heroic saga style. Broken Knives is youth, becoming, beginnings. Book two, The Tower of Living and Dying, is maturity, perhaps. Book three is old age.

As I may have hinted above, the key theme is violence and the desire to commit violent acts.

DJ: When I read, I love to collect quotes – whether it be because they’re funny, foodie, or have a personal meaning to me. Do you have any favorite quotes from The Court of Broken Knives that you can share with us?

Anna: ‘He stares mesmerised at the dying. The beauty of it. The most beautiful thing in the world. Killing and killing and such perfect joy.’

‘Then they broke for dinner and it was roast pork and whichever fucker thought roast pork was a good idea right now should be disemboweled.’

DJ: Now that The Court of Broken Knives is released, what is next for you?

Anna: I’ve written book two, The Tower of Living and Dying, which will be published summer 2018, and am now well into book three. I’ve also got various stories set in the Empires of Dust world coming out in anthologies – Booknest.Eu are doing a wonderful charity anthology for Medicines Sans Frontiers, and NewCon Press are doing Legends III: Stories in Honour of David Gemmell. And, distinct from my own world, I’m a part of a big new dark fantasy Kickstarter project that will be revealed in September. I’m very busy, but it’s an amazingly exciting time.

*** The Court of Broken Knives is published by Orbit and is available TODAY!!! *** 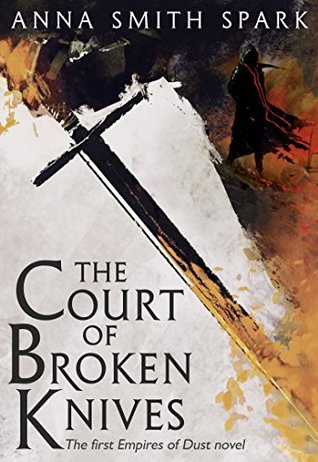 In this dark and gripping debut fantasy that Miles Cameron called “gritty and glorious!” the exiled son of the king must fight to reclaim his throne no matter the cost.

It is the richest empire the world has ever known, and it is also doomed. Governed by an imposturous Emperor, decadence has blinded its inhabitants to their vulnerability. The Yellow Empire is on the verge of invasion–and only one man can see it.

Haunted by prophetic dreams, Orhan has hired a company of soldiers to cross the desert to reach the capital city. Once they enter the Palace, they have one mission: kill the Emperor, then all those who remain. Only from the ashes can a new empire be built.

The company is a group of good, ordinary soldiers, for whom this is a mission like any other. But the strange boy Marith who walks among them is no ordinary soldier. Young, ambitious, and impossibly charming, something dark hides in Marith’s past–and in his blood

Anna Smith Spark lives in London, UK. She loves grimdark and epic fantasy and historical military fiction. Anna has a BA in Classics, an MA in history and a PhD in English Literature. She has previously been published in the Fortean Times and the poetry website http://www.greatworks.org. Previous jobs include petty bureaucrat, English teacher and fetish model.

Anna is represented by Ian Drury at Sheil Land.