Today I am interviewing Tim Akers, author of the new fantasy novel, The Iron Hound, second book in The Hallowed Wars series.

DJ: Hey Tim! Thanks for agreeing to do this interviews! ☺

Tim Akers: I’m excited to be here! First off, I grew up in the mountainous bits of North Carolina, but moved to Chicago for college back in the 90s. My first professional writing credits were for various role playing games while I was still in college, but after graduation I focused on paying bills and having food to eat, so didn’t get much writing done for a while. I turned that around in my early thirties, started writing short stories, and eventually found my way into novels. I’ve been at this professionally for almost fifteen years now, and The Iron Hound will be my fifth published novel.

DJ: What is The Iron Hound and also The Hallowed Wars series about?

Tim: The overall series is about a conflict between two countries and two religions, focusing on the lives a handful of people most affected by the schism. The series follows Malcolm Blakley, a duke of the north, and his son Ian, as they try to unravel an ancient conspiracy aimed at destroying both their country and the church. The story is also told from the perspectives of an inquisitor of the church, Frair Lucas, and his ass-kicking companion, the paladin Elsa LaFey. The final character is Gwendolyn Adair, whose family has been hiding a generations long heresy from the church. Her story is the focus of book one, so I won’t say much to spoil it. Suffice to say, her already complicated life gets much more interesting in book two.

Like all second books, The Iron Hound picks up on the tensions introduced in the first novel in the series (The Pagan Night) and escalates them toward the final conflict, which will occupy the final installment, The Winter Vow, due next summer.

DJ: What were some of your influences for The Hallowed Wars series?

Tim: I like to describe The Hallowed War as a mash up between The Game of Thrones and Princess Mononoke. There’s a lot of character driven politics against a backdrop of metaphysical weirdness. The old gods of the pagan religion have gone mad, and are now hunted down like monsters by the inquisitors and paladins of the celestial church. Conflict arises when the origins of the gods and their relationship with the church come into question.

Tim: Having a moderately large cast lets me approach the tension in the story from a variety of angles. My hope is that every reader finds one or two of the characters especially intriguing, without being bored by the rest of the crew. So, to say a little about each character:

Malcolm Blakley – Malcolm was the hero of the last war. He’s a duke of the north, and one of the few nobles of that land trusted by both the north and the south. He’s growing old, though, and tired, and wants to give his son an inheritance of peace. Over the course of the series he tries harder and harder to bring a peace that keeps eluding him.

Ian Blakley – Malcolm’s son wants the glory his father has already earned, but the deeper into conflict he goes, the less he finds he has in common with Malcolm. He’s torn between his upbringing in the church and the wild pagan heritage of the north.

Frair Gilliam Lucas – An inquisitor of the celestial church and dedicated to Cinder, the god of winter. Lucas travels with his paladin Elsa LaFey hunting the feral gods of the north. He stumbles across a demon that points to a conspiracy at the heart of the church, forcing him to question everything he knows about the pagans and their gods.

Elsa LaFey – A paladin of celestial church and dedicated to Strife, the goddess of summer, Elsa is Lucas’ protector. She slays the feral gods that Lucas hunts, harnessing the incredible power of the sun to burn her prey to ash. However, when Lucas’ investigation starts to shake her faith in the church, Elsa must decide whether she’ll stay faithful to the church, or her mission.

Gwendolyn Adair – The Adair family holds a barony in the north, and has been hiding a pagan secret from the inquisition for generations. After the events of the first book (which I won’t spoil here) Gwen is left at loose ends. Hunted by the inquisition, untrusted by the pagan tribes, and haunted by the gods she has betrayed, Gwen must figure out her place in the world, or die trying.

DJ: What is the world and setting of The Hallowed Wars series like?

Tim: Tenumbra is an island loosely based on England following the Conquest. Two nations live in relative peace on the island, with Tener in the north and Suhdra in the south. The Suhdrins brought their religion, the celestial church, to Tenumbra generations ago, and after a series of crusades have converted all but a few pagan tribes to their faith. Those tribes lurk in the forests of the north, hiding from the inquisition. Unfortunately, because the tribes are no longer able to tend to their gods, the nature spirits have gone feral, manifesting and destroying villages, terrorizing castles, and generally causing destruction. Because of this, the celestial church hunts and kills these feral gods, known as gheists. But because they are nature spirits, the gheists keep coming back, creating an endless cycle of hunt and harm.

DJ: I was just reading the back cover of this book, and I saw “demonic gheists”. You have to tell me more about that.

Tim: Each gheist is the mad fragment of a nature spirit. Once worshipped by the pagan tribes and abandoned following the crusades, the gheists are each individual and strangely warped by their centuries of neglect. They’re very heavily influenced by shinto concepts of spirit, with a healthy dash of Lovecraftian horror thrown in.

DJ: How have the reviews been from readers, bloggers, and reviewers for the first book, The Pagan Knight, in The Hallowed Wars series? Is there anything that your audience seems to be particularly enjoying or is eager to find out more about?

Tim: The reviews have been good. People seem caught up in the characters. It’s important for me to focus on individuals when telling a story this large. By placing interesting and compelling characters at the center of the conflict, and telling the story from multiple angles, you can really involve the reader in the full breadth of the story without getting bogged down.

DJ: Now, what do you think readers will be talking about most once they finish The Iron Hound?

Tim: A lot of things that would be spoilers. There are a lot of reversals, not only of fortune, but of intent. I think readers will be trying to decide who they hope wins, in the end.

DJ: What was your favorite part about writing The Iron Hound?

Tim: There are a lot of moving parts that I’m setting up for the finale. I’m excited for readers to start seeing the connections between characters, the unexpected alliances, the turns of fortune and allegiance. It’s an exciting book.

DJ: Did you have a particular goal when you began writing The Hallowed Wars series? The Iron Hound is on the second books in the series, but is there a particular message or meaning you are hoping to get across when readers finish it? Or is there perhaps a certain theme to the story?

Tim: I don’t like to say what I hope readers get out of a story, particularly. My main goal is to entertain, maybe to say something about heroism and destiny, maybe to say something more about how we approach our own histories. But seriously, my number one hope is that the reader enjoys the story. I’m not here to teach you anything. Except maybe “Don’t taunt feral gods”, but that’s kind of obvious.

DJ: When I read, I love to collect quotes – whether it be because they’re funny, foodie, or have a personal meaning to me. Do you have any favorite quotes from The Iron Hound that you can share with us?

Tim: Well, I’m deep into the first draft for book three, so I don’t think I can pull anything specific from The Iron Hound from memory. A particular scene that I’m quite fond of centers on Malcolm realizing that he’s lost his way, and really focusing on what matters to him most. The action that follows is quite memorable, and I think that’s all I’ll say about it.

DJ: Now that The Iron Hound is released, what is next for you?

Tim: Well, I’m writing book three. I have a pitch underway for a YA novel that’s a little Gundam, a little Hunger Games, and a little League of Legends. And I’m still doing game writing, though for now all of that is covered by an NDA.

Tim: Everything you need is at www.timakers.net. It has links to my twitter feed, my newsletter, and links to Amazon, B&N, Kobo, and Indiebound for all my books. There’s even a blog. Kind of.

DJ: Before we go, what is that one thing you’d like readers to know about The Iron Hound and The Hallowed Wars series that we haven’t talked about yet?

Tim: This is a fantasy novel for people who love fantasy. It’s about heroes and hard decisions, the love inside a family and the loyalty demanded by jealous gods and even more jealous kings. It’s exciting and it’s thoughful.

Tim: My pleasure! Writing books wouldn’t be half as rewarding without engaged readers like you. I hope you enjoy the book!

*** The Iron Hound is published by Titan Books and is available TODAY!!! *** 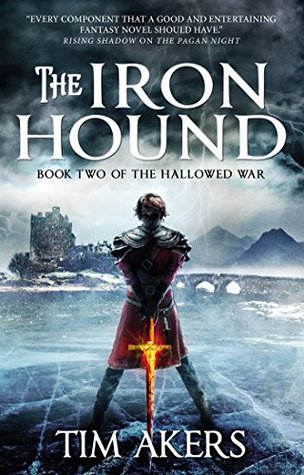 Tensions flare between north and south, and hatreds erupt into war. Yet the conflicts of men are quickly overshadowed by a far greater threat. Creatures long kept confined rise from below, spreading destruction on an unimaginable scale. The flames of war are fanned by the Celestial Church, whose inquisitors and holy knights seek to destroy the pagans wherever they are found. A secret cabal creates unexpected allies, and pursues its own dark agenda… While Malcolm Blakley seeks to end the war before all of Tenumbra is consumed, his son Ian searches for the huntress Gwendolyn Adair, and finds himself shadowed by the totem of his family, the Iron Hound. Gwen herself becomes allied with the pagans, and wrestles with the effect of having been bound to a god.

Tim Akers was born in deeply rural North Carolina, the only son of a theologian, and the last in a long line of telephony princes, tourist attraction barons, and gruff Scottish bankers. He moved to Chicago for college, and stayed to pursue his lifelong obsession with apocalyptic winters. He lives (nay, flourishes) with his brilliant, tolerant, loving wife. He splits his time between pewter miniatures and fountain pens.