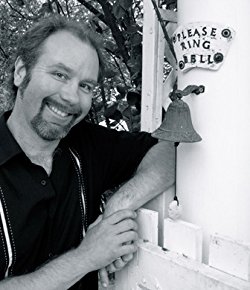 DJ: Hey Ivan! Thanks for agreeing to do this interview!

Ivan Ewert: Thanks so much for having me! By day I sit in a cube and alternate between watching the screen for trouble and looking out the window, dreaming of more interesting trouble. By night I cook delicious meals, then write delicious nightmares. I’m lucky to be seventeen years married to the same wonderful artist and to be part of a small but supportive family – even if they can’t enjoy reading my horror, they always support my writing.

DJ: What is The Gentleman Ghouls series about?

Ivan: At its heart, the series is about insatiable hunger, isolation, and body horror. It follows our protagonist, Gordon Velander, across the breadth of the United States in a passionate hunt for both self-redemption and terrible vengeance.

DJ: What were some of your influences for The Gentleman Ghouls series?

Ivan: The idea started with Lovecraft’s The Picture in the House. I was asked to write the most horrible things I could imagine, and the subject, restraint and localization of that short story has haunted me since I was a child. An interest in Goetic magic and a strong distaste for authoritarianism influenced the world, while the small towns around which I grew up informed the environments. I don’t read much horror, to be honest, but I can’t help being influenced by writers like Chuck Wendig and Catherynne M. Valente. I wouldn’t dare compare myself to them, but the default style I aspire to straddles theirs.

Ivan: I’m a fan of both reluctant heroes and anti-heroes, both of which describe Gordon well, and I find his unwillingness to take the easy or simple path endearing. He is, to my mind, a very human and uncertain voice in a story – and a world – which revolves around knowing what you want.

I’m also a sucker for convoluted dialogue and flowery speech, for which Orobias gave a delightful outlet; and for characters of flexible morality and drive. Sylvie is a primary example of that type.

DJ: What is the world and setting of the The Gentleman Ghouls series like?

Ivan: It’s a shadow of our Earth and America. Then again, perhaps it’s not a simple shadow after all.

DJ: Has anything special or new been added to the omnibus?

Ivan: Yes! Two new short stories, never-before seen, are included in the omnibus. An Incident at Camp Douglas fills out a bit of the world’s history, particularly the southern America we don’t see in the main storyline; while Dream Homes takes place after the events of the main storyline and answers one of the most common questions I received from readers and reviewers alike.

DJ: How have the reviews been from readers, bloggers, and reviewers for the all three books of the The Gentleman Ghouls series? Is there anything that your audience seems to be particularly enjoying or is eager to find out more about?

Ivan: The most frequent commentary is around my attention to our hungers, both physical and metaphorical. I was pleased to see that strike such a chord in readers, since the balance between two worlds is so central to my theme. I’ve been told that the lushness of my descriptions kept some readers coming back even though they didn’t care for the horror genre in general, and nearly everyone asks the same question: Is there more to tell? Are we really through?

DJ: What was your favorite part about writing The Gentleman Ghoul series?

Ivan: I actually came to enjoy the editing process! I never thought that would happen, but by working with Jennifer Brozek at Apocalypse Ink Productions, I got a much deeper understanding of how to effectively polish my work. I’m deeply grateful to her and the house for that gift. Aside from that, writing the characters of Orobias and Carreau always made me happy inside, as did writing all types of meals.

DJ: What was your goal when you began writing The Gentleman Ghoul series? Was there a particular message or meaning you are hoping to get across when readers finish it? Or is there perhaps a certain theme to the story?

Ivan: There is, though I’d prefer to leave discovering that as an exercise for others, if that’s all right. While a writer does their best to bake a deeper meaning into their work, it’s the readers who take away what means the most to them, what speaks to their own tastes and hearts. I’m pleased to learn from rather than instruct them.

Ivan: The original story was just the first half of the first book, to be honest. In my mind, the scene in an abandoned north woods cabin where Gordon gives up hope was the bitter and unhappy end to a story of betrayal and victimization … thankfully, people weren’t going to let it go at that. Gordon came around in more ways than one and turned the overall arc into one of self-actualization and redemption by the time we were through. Orobias and Sylvie both change thoroughly as well throughout all three of the books, and possibly into the short stories …

DJ: When I read, I love to collect quotes – whether it be because they’re funny, foodie, or have a personal meaning to me. Do you have any favorite quotes from Famished: The Gentleman Ghoul Omnibus that you can share with us?

Ivan: The one I always come back to isn’t that meaningful, but is still a favorite passage from Carreau:

“There are just so many simple, easy things to slide down the gullet in your lovely little country. What is it where you come from? Fried okra? Bourbon? Chicken fried steak? Tell me, what’s Tennessee all about, deep in the pit of your stomach?”

And the second, from the character of Cook:

“Talk to me about acquired tastes, Dylan Wildye. It’s always a fascinating conversation.”

Neither of them are showstoppers, I suppose, but I’m fond of ‘em.

DJ: Now that Famished: The Gentleman Ghoul Omnibus is released, what is next for you?

Ivan:  I’ve started work on a suburban fantasy, one which should be less bloody if no less terrible. My family hasn’t been able to stomach this series, and I would like to have something they could sink their teeth into.

DJ: Before we go, what is that one thing you’d like readers to know about Famished: The Gentleman Ghouls Omnibus that we haven’t talked about yet?

Ivan: Hard work gives great rewards. I sound a bit like one of the antagonists, I suppose, but it’s the truth. Writing these stories has stretched me far past the limits I thought were set in stone. It’s my hope that anyone with a story in their head will see that it can be done – around family obligations, around day jobs, around a desire to lay on the couch and play videogames all day. If I was able to wring three novels out, you can too. I believe in you.

Ivan:  Simply this: Thank you for your time, and for all the work you’ve done! I look forward to finding other authors through your site.

*** Famished: The Gentleman Ghouls Omnibus is published by Apocalypse Ink Productions and is available TODAY!!! *** 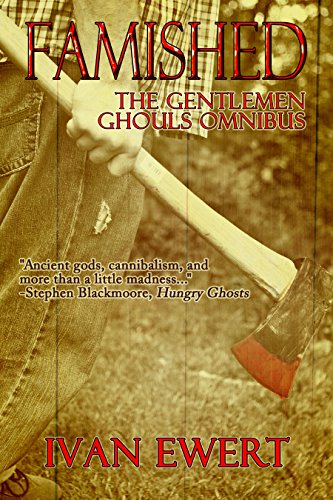 It’s the driving force behind survival.

The Velander bloodline carries an ancient secret: power and immortality. But that power requires a key to unlock: human flesh. Gordon Velander finds himself an unwilling participant in a play for survival – but he won’t be powerless for long.

It’s the driving force behind passion.

The Gentleman Ghouls have survived for centuries due to cunning and careful planning but their world in unraveling. Gordon has vowed to take the Ghouls down no matter what, but he’s fighting a war—both within and without. The Ghouls, on the other hand, are not waiting patiently for the end to come.

It’s the driving force behind revenge.

With the Farm and the Commons destroyed, the Ranch is the last outpost of the Ghouls. With the bitter end in sight, Gordon must face his greatest challenge yet—claiming his own fate as other forces make their moves.

Revenge is sweet.
Passion is fulfilling.
But survival trump all.

Ivan Ewert was born in Chicago, Illinois, and has never wandered far afield. He has deep roots in the American Midwest, finding a sense of both belonging and terror within the endless surburban labyrinths, deep north woods, tangled city streets and boundless prairie skies. The land and the cycles of the year both speak to him and inform his writing; which revolves around the strange, the beautiful, the delicious and the unseen.

His work has previously appeared in the award-winning anthology Grants Pass, as well as in Close Encounters of the Human Kind, Human Tales, Space Tramps: Full-Throttle Space Tales and Beasts Within 3: Oceans Unleashed, while his culinary writing has appeared in Alimentum: The Literature of Food. An early treatment of Famished, then named Vorare, as well as separate works titled Solstice and Idolwood, appeared in the e-zine The Edge of Propinquity from 2006 to 2011. He was the sole author to span all six years of that publication.

FAMISHED: THE FARM is his first published novel.

Ivan wears a number of creative hats professionally, including graphic design and acting. He is currently working as voice talent on a lyric proposal to the Poetry Foundation, and appeared as himself alongside his family in the award-winning documentary The Suicide Tourist. He designed the book jacket for Industry Talk: An Insider’s Look at Writing RPGs and Editing Anthologies, as well as logos for Timid Pirate Publishing and such performing companies as Sage Studio, Lucy’s Café, and the Inhabit Theatre.

In previous lives, he has worked as an audio engineer, a purchasing agent, a songwriter, a tarot reader, a project manager and, for a remarkably short stint, an accountant. In his spare time, Ivan occupies himself with reading, gaming, and assisting with the jewelry design firm Triskele Moon Studios. He currently lives near the Illinois-Wisconsin border with his wife of thirteen auspicious years and a rather terrifying collection of condiments and cookbooks.

Ivan can be reached at www.ivanewert.com and on Twitter @IvanEwert.