Today I am interviewing Sandra Unerman, author of the new fantasy novel, Spellhaven.

DJ: Hey Sandra! Thanks for agreeing to do this interview!

Sandra Underman: Thank you for asking me. I live in London, in the UK. Until a few years ago, I had a career as a Government lawyer. I’d been trying to write fantasy fiction for many years but my output had been very small. When I retired, one of my ambitions was to work seriously at my writing. So I undertook an MA in Creative Writing and have since had a number of short stories published, as well as Spellhaven. I am a member of the British Science Fiction Association and the British Fantasy Society, as well as the London Clockhouse Writers’ Group. My interests include folklore and history.

DJ: What is Spellhaven about?

Sandra: It begins in England, just before the outbreak of the First World War. Jane, a young musician, is kidnapped and sent to Spellhaven, an island city ruled by magicians. Her music is wanted to help entertain the Unseen Spirits, who must be kept in good humour to maintain the peace and prosperity of the city. Jane is offered a contract for three years to play music for her kidnapper, Lucian, but she refuses to co-operate. She agrees instead to undertake an apprenticeship with another magician lord, provided she is taught magic in return. Her rivalry with Lucian and her struggles to learn magic lead her into conflicts which shake the city to its foundations.

DJ: What were some of your influences for Spellhaven?

Sandra: A great mixture. I’d been reading a lot about the history of theatre and ballet in England and Russia and I’m sure that went into the idea of the Unseen Spirits and the shows, including puppet shows, which fill the life of Spellhaven. Medieval legends about the sea and about the heroes who lived in the gaps of history have also caught my imagination over many years. I have a book called The Lost Literature of Medieval England by R.M. Wilson, which is full of fascinating hints. So far as fantasy writers are concerned, some of my favourites are Tolkien, T.H. White, Patricia McKillip, Frances Hardinge, Susanna Clarke and Ellen Kushner but I don’t set out to write like any of them.

Sandra: The story is told from Jane’s point of view throughout. She is tougher than she looks, or perhaps than she realises herself. She plays the flute and to begin with, music is the most important thing to her. She is torn between her anger at being kidnapped and her enjoyment of the life she is able to lead in Spellhaven.

DJ: What is the world and setting of Spellhaven like?

Sandra: This is a historical fantasy, set in England and Northern Europe. The First World War forms an important backdrop to everything that happens. The city of Spellhaven is outwardly at peace, ruled by an oligarchy of magicians, both men and women. But rivalry between magicians turns out to be more dangerous than anyone had understood.

DJ: Tell us about the magic in this world too, please!

Sandra: The magicians of Spellhaven gain their powers through the service of the Unseen Spirits, bound to the city for many hundreds of years. The Spirits must be entertained with all kinds of theatrical shows but they also appreciate individual performances and lend power to their favourites to make magic in many different ways.

DJ: What was your favorite part about writing Spellhaven?

Sandra: I enjoyed it all. I wrote the first draft in three months, as part of my MA course, and then took plenty of time to revise and expand.

Sandra: I hope they will enjoy meeting my characters but also spending time in the city of Spellhaven itself.

DJ: Did you have a particular goal when you began writing Spellhaven? Was there a particular message or meaning you are hoping to get across when readers finish it? Or is there perhaps a certain theme to the story?

Sandra: No particular message. I wanted to tell a good story and to evoke images and themes which have been in my mind for ages, so as to make them come alive for other people.

DJ: When I read, I love to collect quotes – whether it be because they’re funny, foodie, or have a personal meaning to me. Do you have any favorite quotes from Spellhaven that you can share with us?

Sandra: When Jane arrives in Spellhaven, she is greeted as ‘little maiden’. She thinks ‘At school and college, people would call her “Little Janey”. She had learned to bare her teeth and answer, “Little but fierce.”’

DJ: Now that Spellhaven is released, what is next for you?

Sandra: My next novel is Ghosts and Exiles, which is due out from Mirror World next year. This is set in London in the 1930s. It’s not a direct sequel to Spellhaven but draws on the same background.

DJ: Before we go, what is that one thing you’d like readers to know about Spellhaven that we haven’t talked about yet?

Sandra: As well as humans and Unseen Spirits, the city is full of cats and firecrows, who know more about what’s happening than they let on.

Sandra: If anyone is interested in reading my short stories, there’s one in Swords and Sorcery, an online magazine, for June 2017, and another in Falling into Fantasy, an anthology due out from CloakedPress in September.

*** Spellhaven is published by Mirror World Publishing and is available TODAY!!! *** 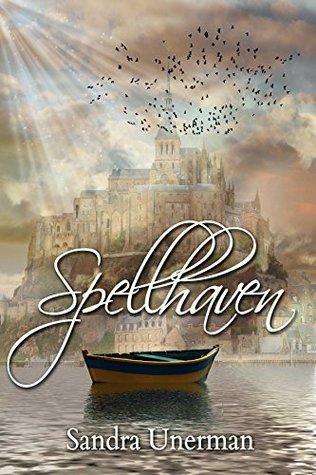 In the summer of 1914, Jane Fairchild, a young English musician, is kidnapped by magic and sent to Spellhaven, an island city ruled by magicians. Here, peace and prosperity are maintained with the assistance of Unseen Spirits bound to the service of the Lords Magician. The Spirits must be kept in good humour by the performance of all kinds of shows, dance, drama and music and Jane is one of many people kidnapped from the outside world and forced to contribute to these entertainments for a set period of service.

Only Jane is having none of it. She will not perform for her kidnapper, Lucian Palafox, but agrees to undertake an apprenticeship with another magician impresario, provided she is taught magic in return. Jane’s forays into magic lead her deeper within the mysteries of Spellhaven, her rivalry with Lucian escalates and the quarrels between them grow strong enough to shake the city to its foundations.

Sandra Unerman lives in London in the UK. When she retired from a career as a Government lawyer, she undertook an MA in Creative Writing at Middlesex University, specialising in SF and fantasy, and graduated in 2013. Since then, she has had a number of short stories published. In 2016, these included stories in Three Drops from a Cauldron, the Midwinter issue and  Aurora Wolf, the September issue, both available online. She writes reviews and articles for the British Science Fiction Association and the British Fantasy Society. She is a member of London Clockhouse writers and other writing groups. Her interests include history, folklore and medieval literature.