Today I am interviewing Daniel H. Wilson, author of the new science-fiction novel, The Clockwork Dynasty.

DJ: Hey Daniel! Thanks for agreeing to do this interview!

Daniel H. Wilson: I’m a science fiction writer who lives in Portland, Oregon. I started out as a roboticist, then I wrote a novel called Robopocalypse that did well and I’ve been a full-time writer ever since.

DJ: What is The Clockwork Dynasty about?

Daniel : It’s a thriller that imagines an ancient race of humanlike robot that has been blending into humanity and serving the great empires of antiquity for centuries. In the present day, these robots are running out of power and cannabilizing each other to stay alive. When an anthropologist named June Stefanov discovers the existence of these creatures, she is thrown into an adventure in which she must learn where they came from and how to replenish their power to save her own life.

DJ: What were some of your influences for The Clockwork Dynasty?

Daniel : I’ve always loved the high-stakes you get from eternal enemies in movies like Highlander, and that’s certainly present. And the organic descriptions of Victorian London in Interview with the Vampire were inspiring as well. And I was definitely inspired by a lot of cool history, like the ancient dynasties of China, the reign of Peter the Great in Russia, and the battles of the East India Company in colonial India.

Daniel : The robot characters are interesting because they each have a “Word” that defines their purpose. Much of the novel is devoted to these characters trying to figure out how to serve their word properly. But because words mean different things throughout the centuries, the robot characters are always on a journey to find their best selves—within the context of whatever age they are living in. In the end, it’s people that give the machines meaning.

DJ: What is the world and setting of The Clockwork Dynasty like?

Daniel : The Clockwork Dynasty is set in our world and in our history, much of it back when life was brutal, nasty, and short. But because the machines are trying to understand how they were built, they spend a lot of time behind the scenes trying to push human civilization forward. They need us to reach a technological age in which we can understand and repair the machines. So it’s a reverse apocalypse, as the robots build up our society and push us toward a technological future.

DJ: What was your favorite part about writing The Clockwork Dynasty?

Daniel : I really loved researching all the history. My characters range from India to China to Europe, and across 1700s Russia. Learning about life for those people at those times was illuminating, and good for both my writing and for my brain!

Daniel : Part of the pleasure of reading the novel is the reveal of the world, and finding out that this story is much more epic than it seems at first. I couldn’t help trying to blow the reader’s mind on the last few pages with a final reveal that shows a new side to this world. I hope that feeling of awe and wonder is what readers are walking away with. I want people to be wondering about this story for months after they finish reading!

DJ: Did you have a particular goal when you began writing the The Clockwork Dynasty? Was there a particular message or meaning you are hoping to get across when readers finish it? Or is there perhaps a certain theme to the story?

Daniel : There are a lot of themes at play in the novel, including the idea that our ancestors had technological triumphs that have been forgotten to time. But the message I’m most excited about is the way the robots are portrayed as paragons of various human virtues. They represent something human beings can aspire to, rather than something we should fear and loathe. And that optimistic view is much more representative of how I feel about robotics and technology in general.

DJ: When I read, I love to collect quotes – whether it be because they’re funny, foodie, or have a personal meaning to me. Do you have any favorite quotes from The Clockwork Dynasty that you can share with us?

Daniel : There is a part of the novel that verges on too action hero-ish, but that I love anyway. It’s when June is watching two robots fight in the street, and she has found a shotgun. One of the robots says something like, “The girl dies,” and June says, “No she doesn’t” and pulls the trigger. What a badass!

DJ: Now that The Clockwork Dynasty is released, what is next for you?

Daniel :  I have a collection of short stories called Guardian Angels & Other Monsters that is released in March of 2018. I’ve been writing short stories since I was a kid, so having my own collection is a dream come true!

*** The Clockwork Dynasty is published by Doubleday Books and is available TODAY!!! *** 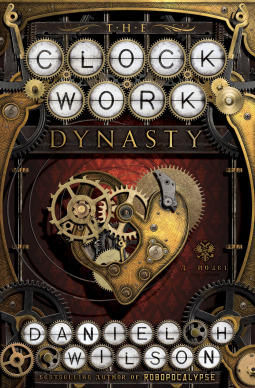 An ingenious new thriller that weaves a path through history, following a race of human-like machines that have been hiding among us for untold centuries, written by the New York Timesbestselling author of Robopocalypse.

Present day: When a young anthropologist specializing in ancient technology uncovers a terrible secret concealed in the workings of a three-hundred-year-old mechanical doll, she is thrown into a hidden world that lurks just under the surface of our own. With her career and her life at stake, June Stefanov will ally with a remarkable traveler who exposes her to a reality she never imagined, as they embark on an around-the-world adventure and discover breathtaking secrets of the past…

Russia, 1725: In the depths of the Kremlin, the tsar’s loyal mechanician brings to life two astonishingly humanlike mechanical beings. Peter and Elena are a brother and sister fallen out of time, possessed with uncanny power, and destined to serve great empires. Struggling to blend into pre-Victorian society, they are pulled into a legendary war that has raged for centuries.

The Clockwork Dynasty seamlessly interweaves past and present, exploring a race of beings designed to live by ironclad principles, yet constantly searching for meaning. As June plunges deeper into their world, her choices will ultimately determine their survival or extermination. Richly-imagined and heart-pounding, Daniel H. Wilson’s novel expertly draws on his robotics and science background, combining exquisitely drawn characters with visionary technology–and riveting action.

Daniel H. Wilson is a Cherokee citizen and author of the New York Times bestselling Robopocalypse and its sequel Robogenesis, as well as seven other books, including How to Survive a Robot Uprising, A Boy and His Bot, and Amped. He earned a PhD in Robotics from Carnegie Mellon University, as well as Masters degrees in Artificial Intelligence and Robotics. Wilson lives in Portland, Oregon.