DJ: Hey Eric! Thanks for agreeing to do this interview!

Eric Brown: Hi DJ; many thanks for asking me. I’m a SF writer active in the field for thirty years (I sold my first tale to Interzone in 1987, and my first collection, The Time-Lapsed Man and other Stories in 1990; my first novel was Meridian Days, in 1992.) Since then I’ve sold over sixty books and a hundred and fifty short stories in the UK and US. My work has been translated into nineteen languages. I live in Scotland, in the Borders, in a quiet little village that suits me fine. I’m married, and have a twelve year-old daughter.

DJ: What is Binary/System about?

Eric: It’s an action-adventure novel about a spacer, Delia Kemp, whose starship undergoes a catastrophic blowout while transiting a wormhole. She finds herself as the only survivor on a hostile alien world which orbits a binary system, suffering extreme winters and summers. Added to the difficulty of surviving on such an inimical word, a race of hostile aliens, the Skelt, want her blood. The novel is about her attempts to survive their attentions and escape from the planet.

DJ: What were some of your influences for Binary/System?

Eric: Jack Vance, certainly – not so much his ornate prose-style as his planet of adventure novels. I read them in my late teens and loved them – and I’m a sucker for crashed-starship-hostile alien tales! I wanted to tell a fast-paced story about a likeable, resourceful woman, aided by some friendly aliens. I suppose every crashed-starship novel I’ve ever read has fed into the writing of Binary System.

Eric: I don’t know about cool quirks (though she’s certainly cool in the first part of the novel, when it’s forty below zero), but I’ve tried to portray Delia as a likeable, tolerant woman who can adapt top circumstances. She’s lost her lover in the blow-out, ands is suffering grief at this, and she learns to accept help from two very different aliens – a monkey-like creature, and a giant spider, who are characters in themselves. She also is implanted with an AI, called Imp, with which she’s in constant dialogue: this helps her out from time to time, tells her things about the planet, and translates the alien languages for her. This got me over the constant problem of writing aliens – how to render their speech: her Imp colloquialises it for her.

DJ: What is the world and setting of Binary/System like?

Eric: The world is called Valinda, and it’s the home of two very different alien races, the Fahran, small, monkey-like primates, and the Vo, big spider-crab analogues. They both live what might be regarded as primitive, pre-technological existences – but both are in thrall to, and constantly threatened by, a race of insect-like aliens, the Skelt, who came to Valinda thousands of year ago, and devolved. The Skelt wish to regain their technological statues, and achieve star-flight again – which is why they are chasing Delia across the face of the word, in order to learn her scientific and technological secrets. The world suffers great extreme of temperature in winter-summer, and when Delia crash-lands, it’s becoming summer – and great changes are under way. I enjoyed myself investing strange alien, odd fauna and lush flora. The Fahran have a relatively new religion, which plays a big part in the novel’s denouement.

DJ: What was your favorite part about writing Binary/System?

Eric: Keeping the freewheeling plot going, inventing exciting incidents and odd situations – and creating the two friendly alien races, the Fahran and the Vo. I enjoyed rewriting this novel – which I can’t say about every book I write. I loved cutting extraneous passages, making it tight and fast-paced, with not a wasted scene.

Eric: I’d like to think that they’ll have been entertained by a fast-paced action-adventure, and found it fun. That’s something that, in my opinion, has been missing form a lot of contemporary SF – that sense of light-hearted fun that keeps the reader turning the pages.

DJ: Did you have a particular goal when you began writing Binary/System? Was there a particular message or meaning you are hoping to get across when readers finish it? Or is there perhaps a certain theme to the story?

Eric: No message at all – other than something that is in all my work: acceptance, the need for diversity, understanding. But principally I wanted to write a romp, a no-holds-barred adventure story (because I knew that my next book was going to be more serious).

DJ: When I read, I love to collect quotes – whether it be because they’re funny, foodie, or have a personal meaning to me. Do you have any favorite quotes from Binary/System that you can share with us?

Eric: The one that springs to mind is when a character lists Tewrran animals: “Horse. Elephant. Donkey. Camel. Zebra. Giraffe. Even an antelope, when I was a kid… And now a Vo!”

Well, it made me smile, in context.

DJ: Now that Binary/System is released, what is next for you?

Eric: A big time-travel novel, a ten thousand word story, Telemass Coda, for PS Publishing – and I’ve just contracted with the same company to wrote four novellas with the SF writer Keith Brooke. Oh – and soon I’ll be working on the third draft of my fifth Langham and Dupre whodunit, set in England in the 1950s. Thankfully I’ve lots on the go.

DJ: Before we go, what is that one thing you’d like readers to know about Binary/System that we haven’t talked about yet?

Eric: I wrote Binary System originally as two 45 k e-novellas for Solaris. I approached the task by thinking that I was writing a pair of Ace Doubles (which influenced my when I was young), which would form a single continuous story. You could read each one individually, but read consecutively you wouldn’t be able to see the join… I hope.

DJ: Why do you write SF?

Eric: For the sheer imaginative freedom the genre provides. Within SF I can be writing a character-orientated social novel in one six-month period, and the next an action-adventure, or a crime novel, or a space opera, or a time-travel tale… The only limiting factor is one’s imagination.

Eric: Thanks – it’s been great answering them!

*** Binary/System is published by Solaris and is available TODAY!!! *** 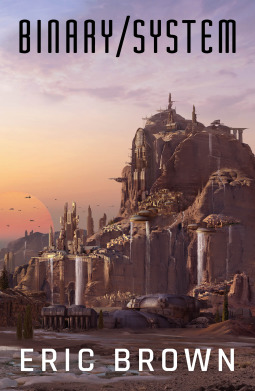 A devastating starship crash. An alien world. An incredible adventure.

After surviving a catastrophic starship blow-out, Delia Kemp finds herself stranded on the inhospitable, ice-bound world of Valinda, populated by the Skelt, a race of hostile aliens who will stop at nothing to obtain Delia’s scientific knowledge. Escaping from the Skelt – assisted by a friendly chimpanzee-like alien and a giant spider-crab – she travels south through a phantasmagorical landscape as the long winter comes to an end and the short, blistering summer approaches. Pursued by the Skelt, she and her companions make a death-defying dash across the planet’s inimical equator to meet up with fellow survivors from the starship, and a final journey to the valley of Mahkanda – where salvation just might be awaiting.

Eric Brown is the award-winning author behind a huge cannon of popular SF novels, including Helix, Engineman, Necropath and The Kings of Eternity, as well as many children’s books, radio plays and articles. He is a frequent contributor to The Guardian’s sci-fi book reviews page and his previous novels have received national coverage.