Today I am interviewing Alexandra Oliva, author of the apocalyptic literary thriller, The Last One, which was named one of the best books of 2016 by The Seattle Times.

DJ: Hey Alexandra! Thanks for agreeing to do this interview!

Alexandra Olivia: Hi! It’s great to be here. Sure—I’m a debut novelist who was born and raised in upstate New York, but my husband and I moved to the Pacific Northwest a few years ago, and I think we’re lifers. I’m currently working on my next novel and spend a good portion of my downtime wondering how much longer I should wait before posting another picture of my dog on Instagram.

DJ: What is The Last One about?

Alexandra: A woman is on a wilderness survival reality TV show when disaster strikes, and she thinks it’s all just part of the show.

DJ: What were some of your influences for The Last One?

Alexandra: All the science fiction and fantasy I read growing up, for sure. I’ve always loved harrowing narratives in which a character I adore is put through the wringer, both physically and emotionally. Also, the ubiquity of reality television—the medium is inescapable! At some point my subconscious must have recognized there was such a cool connection between the two, and that I could have a really good time contrasting a real survival situation with the faux survival premise of a reality show.

Alexandra: Some people love my main character; other people hate her—or at least find her “unsympathetic.” Which is fair; I tried to write a complicated and realistic woman going through hell. She’s not your typical do-gooder; she isn’t always nice and she doesn’t always do the right thing, and while she can be described as “strong” in many ways, she’s also weighed down by some pretty massive fears and regrets. Personally, I think that’s what makes her compelling. It’s certainly what made her so fun to write; I loved exploring the ridges and chasms of her personality as she’s pushed to her psychological and physical limits.

DJ: What is the world and setting of The Last One like?

Alexandra: It’s an any-second-from-now near-future setting in which the world as we know it is struck by disaster, and the main character is moving through the northeastern US, largely through the wilderness. Between growing up in a tiny mountain town and all the hands-on research into wilderness survival I did for the book, I like to think it’s a pretty authentic-feeling setting.

DJ: What was your favorite part about writing The Last One?

Alexandra: I remember sitting at my desk about fifty pages into my first draft and thinking, “I’m due for some action. What exciting, awful thing could happen to her right now?” The resulting scene is a pivotal point in the story and I had a ridiculously good time writing it; I’m pretty sure I giggled my way through that chapter. There’s also one contestant, a guy referred to as Exorcist, who was cast as the show’s wild card—and he knows it. His antics were really fun to write. Overall, this was the first fiction project in which I really allowed myself to let loose as a writer, and I so enjoyed playing with different voices and points of view, from the somewhat snarky omniscient reality show narrative, to the more intimate first-person perspective of the main character.

DJ: Did you have a particular goal when you began writing The Last One? Was there a particular message or meaning you are hoping to get across when readers finish it? Or is there perhaps a certain theme to the story?

Alexandra: Narratives with heavy-handed messages tend to annoy me; I write more to explore than to preach. That said, certain themes absolutely emerged as I was writing the book, and I now realize that at its heart, The Last One is a novel about perception: How we see the world around us, each other, and ourselves.

DJ: When I read, I love to collect quotes – whether it be because they’re funny, foodie, or have a pAlexandraersonal meaning to me. Do you have any favorite quotes from The Last One that you can share with us?

Alexandra: This is difficult; there are so many lines in there that mean so much to me—and many of my favorites require spoiler alerts. But here’s one that doesn’t: They’ll wait until I’m asleep–or nearly asleep–to strike. That’s how they do it; they blur the line between reality and nightmare. They give me bad dreams, and then they make them come true.

DJ: Now that The Last One is released, what is next for you?

Alexandra:  The book’s been out for about a year, but I’m currently celebrating the paperback release; with its new cover, it kind of feels like having a whole new book come out! Other than that, I’m plugging away on my next novel, which I’m hoping to have a full draft of soon.

Alexandra: My pleasure! Thanks for having me.

*** The Last One is published by Ballantine Books and is available TODAY!!! *** 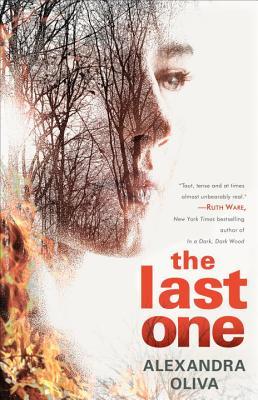 Survival is the name of the game as the line blurs between reality TV and reality itself in Alexandra Oliva’s fast-paced novel of suspense.

She wanted an adventure. She never imagined it would go this far.

It begins with a reality TV show. Twelve contestants are sent into the woods to face challenges that will test the limits of their endurance. While they are out there, something terrible happens–but how widespread is the destruction, and has it occurred naturally or is it man-made? Cut off from society, the contestants know nothing of it. When one of them–a young woman the show’s producers call Zoo–stumbles across the devastation, she can imagine only that it is part of the game.

Alone and disoriented, Zoo is heavy with doubt regarding the life–and husband–she left behind, but she refuses to quit. Staggering countless miles across unfamiliar territory, Zoo must summon all her survival skills–and learn new ones as she goes.

But as her emotional and physical reserves dwindle, she grasps that the real world might have been altered in terrifying ways–and her ability to parse the charade will be either her triumph or her undoing.

Sophisticated and provocative, The Last One is a novel that forces us to confront the role that media plays in our perception of what is real: how readily we cast our judgments, how easily we are manipulated.

A graduate of Yale University, Alexandra Oliva grew up in a small town deep in the Adirondack Mountains of upstate New York. She earned an MFA in Creative Writing from The New School University and undertook intensive wilderness survival training while researching The Last One. She lives in the Pacific Northwest with her husband and their brindled pup, Codex. The Last One is her first novel.