Today I am interviewing William Sutton, author of the new historical mystery novel, Lawless and the House of Electricity, third book in the Lawless series.

William Sutton: Thanks for asking me. I’m a tall messy writer from Scotland living in Portsmouth, England. I began my creative endeavours putting on plays and singing songs at open mics. After deciding I wasn’t going to be the next Tom Waits or Tom Stoppard, I began writing novels. But I still love performing and I put on story/song nights all over town with writer friends. When not writing, I play music in bands. I’m also journalist and Latin teacher.

DJ: What is Lawless and the House of Electricity and also the series about?

William: Lawless and the House of Electricity interweaves a private tale of romance and loss with international conspiracies around military-industrial business. Family secrets, mental health, plus espionage and immigration intrigue. This collision offered me a chance to combine a gothic country house novel with a techno-thriller where Europhobia causes nationalistic panic and terror on the streets. Sound familiar?

The series explores the amazing developments of the 1860s: the Metropolitan underground, the London sewers preventing cholera, new power and communications from the telegraph to pneumatic trains to hydraulic lifts. In amongst this high-power technology, I explore stories of love, loyalty and loss.

DJ: What were some of your influences for the Lawless series?

William: I always have modern and classic stories in mind.

For Lawless and the Devil of Euston Square, I was using the sensation fiction techniques of Wilkie Collins (The Moonstone, The Woman in White), Mary Elizabeth Braddon and Dickens, but harnessing them to a plot inspired by Fight Club, plus a bit of Paul Auster and Iain Banks (more on that here).

DJ: Can Lawless and the House of Electricity be read as a stand-alone?

William: Yes. The stories are separate. The recurring characters are the backbone of the book, though: Sergeant Lawless himself; his friend Ruth Villiers; and the erstwhile urchin Molly. So knowing the previous books adds another layer to reading this one.

WilliaA: Lawless is dogged and loyal – which sometimes makes him pig-headedly misguided, when he gets the wrong end of the stick. He’s also shocked when his loyalties are divided and he has to take sides.

Ruth Villiers, brilliant librarian, is the kind of person who always finishes the crossword before you and can’t resist giving you hints. She’s got beauty and flair, but she doesn’t value herself, and can therefore ne rather spiky.

Molly is several people’s favourite character: grown up on the streets of London, she can turn her hand to anything, fixing sewers, delivering secret packages, running a circus troupe. In this book, having to straighten out her behaviour and her speech to be a drawing mistress is a big ask.

The Earl of Roxbury is based on Baron Armstrong, who built Cragside, the first house in the world with electric lights (and they were hydro-powered) but also was an arms manufacturer.

DJ: What is the world and setting of the the Campbell Lawless series like?

William: The books are set in the 1860s. I’d never heard of steampunk when I wrote the first one, but I’ve realised the reality of life then (trains underground, hydraulic networks, electrical corsets and pneumatic rails) was steampunk as hell. So the books are in the real world, but have a hyperreal feel about them.

DJ: Why did you choose the Victorian setting?

William: I fell into it by accident (setting my first book when they’re building the Metropolitan line), but I have totally fallen for the mid-Victorian period, where our myths about Victorians got established:

The technology, the conspiraces, the lies and political intrigue are therefore a brilliant way to reflect today’s lies and intrigues: and the fact that personal politics – and love – are every bit as important to them, even if they can’t always express them as we might today.

DJ: How have the reviews been from readers, bloggers, and reviewers for the first two books of the Campbell Lawless series? Is there anything that your audience seems to be particularly enjoying or is eager to find out more about?

William: Great, thank you. The Morning Star called the second book “a marvellous read – but harrowing, and the author shows his readers little mercy”. I like that.

Readers have loved the urchins and their slang. I use hints of a whole range of London patois of the day: parlare and backslang, costerslang and argot.

The Scotsman called the first book “extravagant and thoroughly enjoyable. If Sutton can maintain this standard of invention, this mastery of linguistic tone, he is on to a winner. One has the impression that this first novel was as enjoyable to write as it unquestionably is to read.”

DJ: What was your favorite part about writing Lawless and the House of Electricity?

A: I absolutely loved trying to understand their take on hysteria. Asti Hustvedt’s amazing book about women in Paris who were exhibited and experimented upon didn’t just open my eyes to the shortfalls of their understanding then; it made me understand that our diagnoses of mental health even today is hit-and-miss guesswork. I dug out lots of gory details about experimental electrical treatment, and that all went into the novel.

William: I hope some will be struck by the personal love stories, while others will blink at the end realising how politicians duped the public into crazy nationalist ideas requiring wild and pointless militaristic spending.

DJ: Did you have a goal when you began the Campbell Lawless series? Lawless and the House of Electricity is only the third book, but is there a particular message or meaning you are hoping to get across when readers finish it? Or is there perhaps a certain theme to the story?

William: There are perhaps two recurring themes. One is about conflict of loyalties. What would you do if your best friend was inveigled into actions that you thought terrible, criminal, unforgivable? What if you found yourself unwittingly involved?

The other is about loss: how far would you go to recover the lost joys of the past?

DJ: When I read, I love to collect quotes – whether it be because they’re funny, foodie, or have a personal meaning to me. Do you have any favorite quotes from Lawless and the House of Electricity that you can share with us?

“Roxbury House appeared through the mists as if it were your home in a dream.”

And here’s a bit from a report on a gunpowder explosion:

“The effect upon domesticated animals has been remarkable. Thousands of pets succumbed with fright, the mortality to canaries being especially severe.”

DJ: Now that Lawless and the House of Electricity is released, what is next for you?

William:  Launches, plus reading at Victorious Festival. Then I’m organising Darkfest, a cross-media arts festival in Portsmouth, with a Day of the Dead night and Dark Songs. Maybe more Lawless, maybe not.

DJ: Before we go, what is that one thing you’d like readers to know about Lawless and the House of Electricity and the Campbell Lawless series that we haven’t talked about yet?

William: How would readers like to hear this series introduced? If they’re not just crime books, nor just historical novels…they’ve got elements of gothic and sensation fiction. I tried saying they’re techno-mysteries, but a reader said the Victorian’s didn’t have technology (ha!).

William: Thanks for having me.

*** Lawless and the House of Electricity is published by Titan Books and is available TODAY!!! *** 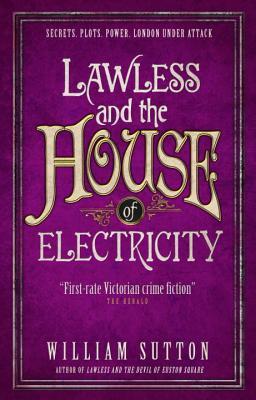 Lawless and the House of Electricity

The new drawing mistress feels inquisitive eyes upon her as she arrives to take up her post at a country house. Ex-street urchin Molly’s quickwitted candour earns her favour with the Earl’s family and guests, but the butler sees through her pose of gentility.

In London’s East End dockyards, a body is found in a lifeboat. But Sergeant Campbell Lawless is summoned to the government offices to weigh up a greater threat.

A gunpowder blast, a train derailed, an explosive ship. The shadow of European machinations looms over the capital, threatening royals and politicians. Lawless must investigate these explosions from the East End to Guernsey and Clerkenwell House of Detention to the English shires.

As Molly teaches the children, she suspects that darker secrets lurk in the gardens. The House of Roxbury, powered by the latest hydraulic contraptions, used to welcome a cavalcade of poets and magicians, explorers and cyclists, scientists and surgeons. Why does it now receive so few visitors? What made this industrial giant a recluse?

Experiments are conducted in the glasshouse laboratories. Molly uses her artistic licence to investigate the unseen forces running Roxbury House. The butler suspects her motives, as he guards the secret of the East Wing; until the diary of the late Lady Roxbury enlightens Molly of the house’s woes. What is the Earl’s sad secret – and the troubling plan for which these sacrifices have been made?

Who is orchestrating these blasts? As the mysterious corpse yields its secrets, Lawless must unravel the threads before dangerous powers fall into unruly hands.

William Sutton comes from Dunblane, Scotland. He has written for The Times and the Fortean Times, acted in the longest play in the world, and played cricket for Brazil. His first novel is a Victorian mystery of a gleaming metropolis mired in corruption.

He writes for international magazines about language, music and futurology. His plays have been produced on radio and in London fringe theatres. He has performed at events from the Edinburgh Festival to High Down Prison, often with a ukulele. He teaches Latin and plays accordion with chansonnier Philip Jeays.