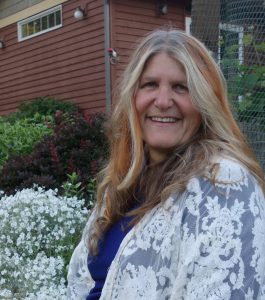 Today I am interviewing Brenda Cooper, author of the new sci-fi collection, Stories of Fremont’s Children, which is currently being funded on Kickstarter to co-incide with the 10th Anniversary Release of her award-winning novel, The Silver Ship and the Sea.

All of the stories are set in the same world as The Silver-Ship and the Sea.

DJ: Hey Brenda! Thanks for stopping by to do this interview!

For this interview, on the first part I’d like to focus on the novels, then for the second, I’d like to talk about the Kickstarter in particular.

Brenda Cooper:  I’m fascinated with technology and how it works, a rabid environmentalist, lately a bit of an activist, and I love reading and writing.  I live in Washington State on an acre and a half of beautiful land. We have two grown-up children and four dogs, three of which are smarter than we are (they’re border collies).

DJ: What is The Silver Ship and the Sea about?

Brenda:  The story is about six genetically enhanced children who are abandoned on a planet that hates genetic engineering.  So in that way, it’s a story of the other.  The series also explores what it is to be human, various definitions of family, and the cost of war. There are three books, with a fourth to come.  The first is out, and hopefully the other three will release in 2018.

DJ: What were some of the inspirations for The Silver Ship and the Sea?

Brenda: It was written during the run-up to the Iraq war, and so it became a bit of an anti-war novel.  Unlike some of books which address war directly (and in fact this series does do so in the last book), The Silver Ship and the Sea illustrates the cost of conflict.  It’s also a chance to explore the costs of choosing to embrace or reject technology. Lastly, I really just wanted to create an interesting world.  Fremont has fabulous creatures, wandering scientists, dangerous volcanoes, and more.

Brenda:  I’ll tell you about three of the six.  Chelo is one of the oldest, and she has the unenviable job of being the adult in the room, and trying to keep her family together.  Her “power” is being able to act as a leader.  But she’s young, and very vulnerable. The hardest thing she had to do is keep her little brother Joseph together. He’s got the most amazing skills, and can read and use data in phenomenal ways. Then there’s Alicia, who has been separated from the others, bullied, and locked up. She’s unstable, and pissed off.  And her greatest gift is being a risk-taker….

Brenda: As I mentioned in a previous answer, Fremont is dangerous and wild.  It’s a colony planet, with only one occupied city and a few sets of roving bands of scientists.  There are multiple moons and meteors streak across the sky.  A single star ship that can no longer fly orbits Fremont, and on the grass plains, another ship lies still and quiet with no one who knows how to fly it.

DJ: How have the reviews been from readers, bloggers, and reviewers for The Silver Ship? Is there anything that your audience seems to be particularly enjoying or is eager to find out more about?

Brenda: The Silver Ship and the Sea was chosen as one the top ten adult books for young readers by the ALA in 2007.  It also won the Endeavour Award, for a notable science fiction or fantasy book written by a Pacific Northwest author.  One of the stories in the collection I’m kickstarting, The Hebras and the Demons and the Damned,  was in The Year’s Best 16.

DJ: The Silver Ship and the Sea was actually already released, but you created something called the “author’s preferred edition”. What is that exactly?

Brenda: I love the story, and it won awards. So I didn’t change the story or plot at all.  But after ten years of learning, I can write a far better sentence than I used to be able to.  For example, I was in love with dashes in the original version of Silver Ship. I took hundreds of dashes out (but left some). I deleted words and sentences and paragraphs that just didn’t need to be there and tightened others. I think of it as chiseling out the unnecessary material to make a better and crisper work. So people who already read it and loved it don’t need to buy the new version unless they want to re-read it.  But I hope new readers come to the series through this version, since I think it’s even stronger.

DJ: What made you want to reach out to Kickstarter originally, and how has your experience been with it so far?

Brenda:  I had four goals.  First, I just wanted to put the stories out.  I think readers will like them, and they’ll be a nice complement to the series.  Second, I wanted to draw attention to the new edition. I have a lot more readers now than I did a decade ago, and many of my new readers probably didn’t go back and pick up this series. Third, I just wanted to grow my readers some as well, and provide a fresh avenue for new readers to find me. Fourth, I wanted to find a way to pay for the production costs of the anthology.  What I’m not doing is trying to make money on the crowdfunded effort.  The money that comes in will pay for production (which we now have covered) and new money will pay to add more stories by other authors in the world.  I’m really excited about that.

DJ: You have many, pledge rewards for backer, ranging from $5 to $175. Since there are so many, I will not ask you to name them all, but instead, could you mention a couple that you think are particularly cool or backers have been fans of in the past?

Brenda:  I’ll mention three levels.  The $5.00 funding level gets the collection in ebook form.  That’s easy.  People can give up one latte and support the creation of this work.  I think it will be a great deal for people, and well worth the investment.  Until we get over 100 backers, they’ll also all get a whole second collection that’s already produced.  These is a set of linked fantasy stories set in Laguna Beach, California.  $50.00 gets a physical and ebook version of the collection AND a physical copy of The Silver Ship and the Sea plus shipping (two shipments – one for new version of The Silver Ship and the Sea since it’s available at the end of the campaign, and one for the collection when it’s done, probably early next year sometime. The highest level, $175, gets a critique of a short story up to 10,000 words. I love doing these, and every year I auction one for Worldbuilders.  These have always gone for over $200.00 in the auctions.  It also gets the ebook of Stories of Fremont’s Children and – for any one of the first 100 backers – an ebook if the fantasy collection I mentioned above, Beyond the Waterfall Door.

DJ: This wouldn’t be a Kickstarter without some bonuses and stretch goals too. Personally, I’m really hoping that last stretch goal gets met 😉

Brenda:  That would be great.  But the one I’m most excited about is the $1600 stretch goal, which lets me include a story by John Pitts. Then I’ll have a story by John Pitts and one by Danielle Ackley-McPhail, and it will be more like a real anthology with the new voices coming and playing in my world. John was one of my original first-readers, and is still a first-reader and a great friend.  I met Danielle through her review of The Silver Ship and the Sea in 2007. So it would be really nice to include them both.

DJ: Now that Kickstarter is underway, what is next for you?

Brenda:  I’m finishing the first draft of Keepers, which is the sequel to my latest novel, Wilders. These are out from Pyr.  After that, I’ll get the rest of these books out and finish up all of the Kickstarter obligations.  Then, who knows? Maybe I’ll take a month off. 🙂

*** Stories of Fremont’s Children is on Kickstarter TODAY!!! *** 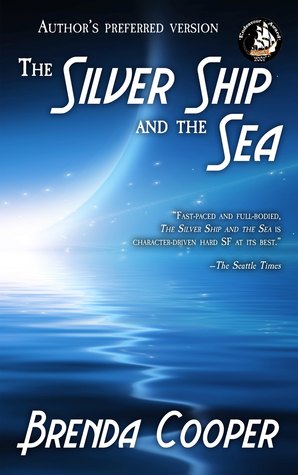 More details about The Silver Ship and the Sea, winner of the 2008 Endeavour Award and the beginning of the Fremont’s Children books

Prisoners of a war they were barely alive for…Fremont’s Children must find their way in a world that abhors their very nature, or discover a way to leave it…

In her award-winning novel The Silver Ship and the Sea, kick-off to the Fremont’s Children series, Brenda Cooper explores what it means to be so different that others feel they must oppress you.

Six human but genetically-enhanced children are stranded on the colony planet Fremont by a war between genetic purists and those that would tinker with the code. Orphaned by that war, the only remains of the children’s heritage are an old woman like themselves who was left for near-dead at the end of the war, and a mysterious silver ship that appears to have no doors.

To preserve themselves the children must leave the safety of the insular community and brave the wilds of Fremont, beautiful but dangerous. An echo of their own natures, or a proving ground of their genetic worth?

In this battle of wills and principles, what does the future hold for Fremont’s Children?

Brenda Cooper is the author of nine science fiction and fantasy books. Her most recent novels are POST (eSpec Books, 2016) and Spear of Light (Pyr, 2016).  Her other works include Edge of Dark (Pyr, 2015), The Creative Fire(Pyr, 2012), and The Diamond Deep (Pyr, 2013) as well as the Silver Ship and the Sea series (available in audio today, and soon to be re-released via Wordfire Press) and Building Harlequin’s Moon, with Larry Niven (Tor, 2005).

Brenda blogs frequently on environmental and futurist topics, and her non-fiction has appeared in Slate and Crosscut.

She is the winner of the 2007 and 2016 Endeavor Awards for “a distinguished science fiction or fantasy book written by a Pacific Northwest author or authors.”  Her work has also been nominated for the Phillip K. Dick and Canopus awards.

A technology professional, Brenda is the Chief Information Officer for the City of Kirkland, which is a Seattle suburb.

Brenda was educated at California State University, Fullerton, where she earned a BA in Management Information Systems.  She is also pursuing an MFA at StoneCoast, a program of the University of Southern Maine.

Brenda lives in Bellevue, Washington with her family and three dogs.