Today I am interviewing Daniel A. Willis, author of the new fantasy novel, Prophecy of the Awakening.

DJ: Hey Daniel! Thanks for agreeing to do this interview!

Daniel A. Willis: I have been many things during my life, but I am most well known as an historian and genealogist. I wrote several nonfiction books in this area before venturing into fiction and exploring my love of fantasy. Then my first novel, Immortal Betrayal, came out in 2011.

DJ: What is Prophecy of the Awakening about?

Daniel: Nikki is a young woman who literally has a voice talking inside her head. The voice turns out to be the Earth-goddess Gaea. She sends Nikki on the heroine’s quest to help fulfill an ancient prophecy about the return of the Greek gods in the present day. However, she is thwarted by the Vatican who knows the prophecy and is determined to prevent it from coming true. This prophecy revolves around an unborn child, whom a devout scientist has mistaken to be the biblically foretold Antichrist. The child’s parents are a mercenary and a movie star. The paths of all these diverse characters come together for a chilling climax in the ruins of ancient Olympia.

DJ: What were some of your influences for Prophecy of the Awakening?

Daniel: It all started when I read the first Percy Jackson book. I went looking for mythology-based stories written more for adults and found precious few. I was also fascinated from an early age by the prospect of the “Antichrist” and mythos surrounding the purported “End Times”. This book blended those influences.

Daniel: Nikki, the protagonist, has long believed she was crazy because heard a voice in her head. Others also treated her the same way growing up. Learning the voice was real and not just her own manifestation is quite liberating for her. But, her social ostracization shows through in some of day-to-day activities.

David is a very religious astronomer who believes the events unfolding are starting the Apocalypse as spelled out in Revelation. His devoutness however also hides a nerdy, somewhat pervy, man who never emotionally left his teenage years.

Amber is the mother of baby in question. She is a movie starlet who has found nothing but disappointment with life, despite becoming very famous and wealthy from her looks.

Rodrigo is a cardinal working at the Vatican and knows the truth of the prophecy. However, he is determined that the Church will cling to what little power they left in western culture.

Add to these a diverse mix of secondary characters who are human hosts for the spirits of the gods, and you end up with quite the literary concoction.

DJ: What is the world and setting of Prophecy of the Awakening like?

Daniel: This is set in our world and at the present time, maybe slightly in the future. There are a few references to the American president along the way who, although unnamed, bears a striking resemblance to the current guy in the White House.

DJ: What was your favorite part about writing Prophecy of the Awakening?

Daniel: Finally telling a story in the present day rather than the past. Both of my previous novels were historical. I also liked the challenge of writing a multi-point-of-view story. Each chapter is from the POV of one of the main characters listed above.

Daniel: That notion that gods could be living amongst us as we speak.

DJ: Did you have a particular goal when you began writing Prophecy of the Awakening? Was there a particular message or meaning you are hoping to get across when readers finish it? Or is there perhaps a certain theme to the story?

Daniel: The goal is best spelled out in the tagline: Apocalypse does not mean the end, it means change. Many religious people live in fear of the “End Times,” but this fear is unjustified. It is time for us a global society to make a change for the better. If we do not, then we really could be facing the end.

DJ: When I read, I love to collect quotes – whether it be because they’re funny, foodie, or have a personal meaning to me. Do you have any favorite quotes from Prophecy of the Awakening that you can share with us?

Daniel: There is not any one that stands out. Throughout, I inject some of my own sarcastic humor, and love a good one-liner.

DJ: Now that Prophecy of the Awakening is released, what is next for you?

Daniel:  Next on my bucket list is to write an alternate history. Many authors who do this take a war and change the outcome and explore the results. I am using my own knowledge to take a difference track. I will propose Queen Victoria decides her eldest son is not fit to succeed her (she expressed this concern in real life a few times) and demands Parliament change the succession laws to allow her eldest child, a daughter, to be next. The interesting part is when you realize that is real history, that daughter was the mother of the German Kaiser from World War I, only now he will become King of England instead. So instad of “world building,” I’ll be world re-building.

Blog: I’ve tried a few times, I can never keep it up.

Goodreads: Others have put my books there, but I don’t follow it. Thoo much negetivity

DJ: Before we go, what is that one thing you’d like readers to know about Prophecy of the Awakening that we haven’t talked about yet?

Daniel: If you have been dreaming of a Percy Jackson book for adults, this is for you.

Daniel:  I always encourage people to shop at brick and mortar bookstores as much as they can. Amazon might be convenient, but it will be a sad when the last bookstore closes its doors. To this end I make sure my novels are available via the distributors the book stores use so they can easily be ordered. 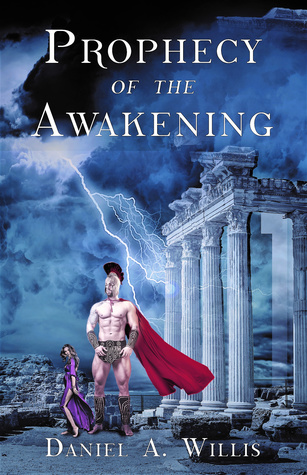 APOCALYPSE DOES NOT MEAN THE END….IT ONLY MEANS CHANGE!

Nikki thought she was crazy. Now she knows that not only is the voice in her head real, it the voice of a goddess!

David is a devout Catholic. Can he continue to cling to his faith in the light of what is going on around him?

Cardinal Santarem knows the truth. But he is not going to let it tear down two thousand years of religious domination.

Amber is a self-absorbed Hollywood starlet. She is the last person anyone would choose to become a mother, let alone the one who will fulfill the Prophecy of the Awakening.

Daniel A. Willis is a renowned royal expert, genealogist, and historian. In addition to his books, he has worked as a free-lance reporter covering royal events. His articles and commentary have appeared on news sources such as Yahoo! News, The Wall Street Journal, and The Associated Press.

In more recent years, he has turned his attention to more biographical works and historical fiction.