DJ: Hey Alistair! Thanks for agreeing to do this interview!

Alistair Kimble: I’m an FBI Special Agent and former U.S. Navy enlisted aircrewman who loves to write fiction. I’m currently assigned to the Denver, Colorado field office where I work national security matters as well as process crime scenes as a member of the Evidence Response Team. My first exposure to science fiction and fantasy was when my great-grandmother would babysit me and watch Kolchak: The Night Stalker, so I’ve been a fan since the mid-1970s!

DJ: What is Iron Angels about?

Alistair: Iron Angels is an urban fantasy detective novel where a group of outcast FBI agents battle a cult intent on extracting supernatural powers from another world. It begins with a bizarre kidnapping case that leads FBI Special Agent Jasper Wilde into the mysterious world of a strange religious cult and even stranger criminals.

DJ: What were some of your influences for Iron Angels?

Alistair: As Iron Angels utilizes the FBI as its investigative agency, I couldn’t help but be influenced by The X-Files, as well as so many science fiction and fantasy films from my childhood and teenage years way back in the ’70s and ’80s. But there’s also a heavy dose of the classic hardboiled detective mixed with the banter of buddy cop films.

Alistair: The two main characters are FBI agents Jasper Wilde and Temple Black. Those two were so much fun to write, and like most FBI agents were gruff at first and people that presented a hard shell as they’d been beaten down over the years by work and by life. They bicker quite a bit in the beginning, but quickly learn how to work together to get the job done. Jasper quotes movies and cracks jokes as a coping mechanism, and eventually, Temple joins in and he finds that they have a lot more in common than he’d believed when they first met. While the agents have to deal with horrific crime scenes and deaths, they aren’t unemotional robots, they’re scarred permanently which wreaks havoc on them and their personal lives, which I think allows the readers to sympathize with them.

DJ: What is the world of Iron Angels like?

Alistair: Iron Angels takes place on present day Earth, but there are guilds and cults that have been fighting for centuries behind the scenes over what some believe are alien powers and others believe are biblical in nature.

DJ: Where did the idea for yourself and Eric to co-author this book come from? Have you done this before or had you two been joking around with the idea and finally decide to give a go for real?

Alistair: I’d written some novelettes for Eric’s 1632 universe, and over dinner one evening, he asked me to write a novel with him. Okay, that sounded flippant, here is what happened: Eric had been wanting to write an urban fantasy with a strong law enforcement component. He was attending a conference in Colorado and over dinner he asked if I wanted to write a book with him. So I said “no.” Why would I want to write a book with NY Times bestseller? But of course I said, “yes.” It’s Eric Flint and he’s a great writer, but an even greater person. I truly enjoyed working with Eric–he’s a master, and to have the opportunity to learn from him was priceless.

DJ: One thing that has always fascinated me is how a book is written by multiple authors. By this, I am referring to the actually process of outlining the story, writing it, and then editing it.

Do you each do your own outline for the whole story? Then look over each other’s sections/chapters and compare to see how the story fits?

Alistair: After the initial discussion over dinner, Eric and I exchanged emails for a month or so, tossing around ideas, before I visited his home in Indiana. We developed a rough outline and visited some key locations that would be used in the novel (it’s set mostly in northeastern Indiana and Chicago). I went home and developed a detailed outline from our conversations and began writing.

DJ: Then, how do you break up who writes what? And I’ve also read that some authors who co-write books will edit each other’s chapters, too.

Alistair: Eric and I worked from a detailed outline (which of course, we deviated from at times) that clearly defined who was going to write each chapter or section. We both edited as we went along, and ended up changing the viewpoint in quite a few chapters, which ended up serving the story much better as you experience the world from the viewpoints of two FBI agents as well as from antagonists. Eric specifically wanted to write the alien/demon viewpoint chapters which ended up sounding so cool, but can only be handled in small doses. It’s masterful and not something I would have wanted to attempt, so I’m glad he wanted to write those!

DJ: What was your favorite part about writing Iron Angels?

Alistair: Working with Eric taught me so many things about not only writing and how to put together a story, but the publishing industry. But as for writing Iron Angels, I have to say getting to know the main characters as we tossed them into crazy situations. It was satisfying for me to live through them while they got to run around and battle a cult intent on extracting power from another world–you know, the stuff I get to do every day in the FBI.

Alistair: Iron Angels allows the reader to see the FBI as written by an FBI agent, but I think it’ll be the chemistry between Jasper and Temple as they battle the cult and the otherworldly powers that will be talked about the most. There’s a lot of banter and a lot of pop culture references throughout, and readers may be surprised that my real life counterparts in the FBI regularly quote films and books as many are fans of genre fiction!

DJ: Did you have a goal when you began writing the Iron Angels? Is there a particular message or meaning you are hoping to get across to readers when they finish it? Or perhaps a certain theme to the series?

Alistair: Our initial goal was to write a fun and exciting urban fantasy which I could inject with my knowledge of law enforcement. But as we outlined and the characters came to life during the writing we discovered a number of themes at play. When another universe rubs against ours, that brings about discussions on religion versus science and is it possible for the two to co-exist? The characters in Iron Angels have strong personalities and beliefs that are just as strong. They continually push each other, and while there are matters of gender and race throughout, the characters learn that they are evenly matched and while they may have taken different paths to become FBI agents, they ended up in the same place fighting evil.

DJ: Now that Iron Angels is released, what is next for you?

Alistair: Eric and I are currently discussing more books in the Iron Angels series. I’m also working on a couple of solo projects, one that is sf/f set in an alternate late 1800s, while the other is a modern day FBI espionage thriller.

DJ: Where can readers find out more about you? :

DJ: Thank you so much for taking time out of both of your days to answer my questions!

*** Iron Angels is published by Baen Books and is available TODAY!!! *** 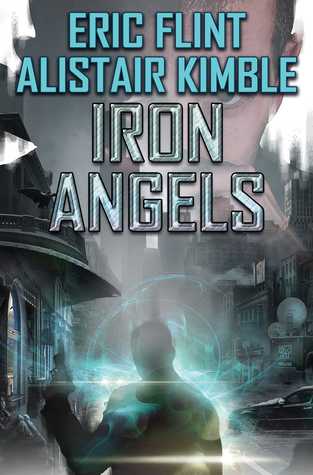 A bizarre kidnapping case leads FBI Special Agent Jasper Wilde into the mysterious world of a strange religious cult and even stranger criminals. At the scene of the kidnapping itself, a frightening apparition is seen. Then, a hideously-mutilated corpse is found nearby. Something wicked has come to the nornal-seeming Chicago suburbs.

It doesn t take longbefore the FBI agents realize that something truly extraordinary is unfolding in northwest Indiana and that, whatever it is, the area s huge steel industry is somehow at the center.
Jasper is joined by Supervisory Special Agent Temple Black.Blackhas recently been put in charge of a new unit, the Scientific Anomalies Group, created to analyze and handle peculiar cases which might be on the periphery of national security.

Another cult is discovered, although this one seems to be opposed to the criminal activities taking place. Further investigation, however, just produces more in the way of mystery. The agents consult with scientists and theologians, but no one has any idea what might be producing the situation.
Until, finally, the cults erupt in open warfare. As the FBI agents race to intervene and finally put a stop to the horrors, they come to understand and accept that something very ancient and very evil has surfaced in the world or, perhaps, something that is very, very alien.

Alistair Kimble is a Special Agent with the Federal Bureau of Investigation where he works national security matters and processes crime scenes as a member of the Evidence Response Team. He served in the U.S. Navy where he dangled from helicopters while performing search and rescue operations as well as mission support for NASA projects such as the Mars Pathfinder, space shuttle recoveries at Edwards AFB, and X projects like the X-36 tailless fighter.

Iron Angels, an urban fantasy detective novel, co-written with Eric Flint (author of the bestselling 1632 series), was chosen by Publishers Weekly as one of its top 10 science fiction, fantasy & horror picks for the fall of 2017 and is scheduled for release on September 5th 2017 from Baen Books.

Alistair’s short fiction can be found in the Fantastic Detectives edition of the Fiction River anthology series, edited by Kristine Kathryn Rusch, and volumes 44 & 47 of the Grantville Gazette.