Today I am interviewing James Webster, author of Heroine Chic, a new collection of sci-fi and fantasy short fiction on the theme of ‘Heroines’.

James Webster: Hi! So, I’m James (my friends call me Webster), and I write weird little stories about monsters. And angels. And gods. And vampires. And witches. And spaceships. They’re usually stories about love and resistance and hope. And makeouts. There are often makeouts.

Um. Basically, I write micro/flash fictions that use speculative concepts as metaphors for everyday issues. That’s my jam. You can find them on my tumblr here.

Oh, and in the rest of my time I am: a slam-winning poet; a LARPer; a theatre marketer. All that stuff.

DJ: What is Heroine Chic about? 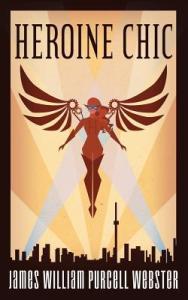 James: So, Heroine Chic is a collection for 52 of my microfictions, themed around the concept of ‘Heroines’. So, these stories all have female or non-binary protagonists – and the idea is to try and celebrate the heroine’s place in sci-fi and fantasy genres. There’s stories about queens, generals, thieves, gods – plus a few poems and some reworkings of myths and legends too.

Theme-wise: a lot of it is about resistance. It’s about me listening to the experiences of women and femme folks in real life and about paying attention to portrayals of heroines in fiction, and about putting a spotlight on the way they carve out space in an uneven world.

But it’s also about taking experiences that are universal and that everyone can relate to and using speculative fiction to illuminate the joy and wonder of those things. So it’s also, in a big way, about love. Not necessarily in a romantic way, but love as a transformative power and as a thing you find at the core of hardship. A thing you feel for folks when you truly see them. So I guess it’s also a bit about empathy.

DJ: What were some of your influences for Heroine Chic?

James: First and foremost, the influence for Heroine Chic is the actual experience of real people in my life. I wouldn’t feel comfortable writing about heroines at all, if it weren’t for the fact that these stories came from a place of listening and learning. It’s me going: “okay, you have told me about your experience and – if it’s alright with you – I’d like to tell you why I think that makes you badass. I’d like to try and help communicate that experience to other folks like me. I’d like to help.”

Luckily, folks seem to think I’ve done an okay job at that. Certainly, most of the women and non-binary folk who inspired these stories seem to like them a lot.

In terms of other authors? I take a lot of influence from writers with rich imaginations and rich language. Folks who can imagine new worlds with incredibly crisp and clear vision. And who surprise you.

DJ: Could you briefly tell us a little about your characters? Are there any common threads that tie the different heroines together? Why will people find them compelling?

James: So, I hope that the various characters that populate the worlds of Heroine Chic come across as quite diverse. But if there’s something that ties them together … it’s the ways in which they are both human and inhuman. When you talk about heroines and you talk about gender, especially when you look back at fairytales and legends, there’s lots of really interesting stuff about what we label as monstrous. And what we think is relatable.

I think why people will find them compelling is the magic. A thing I do in a lot of my stories is not just to present characters or worlds that have magic in them, but to use that as a lens to examine what are the traits or actions that I think are magical. What are the symbols from which magic springs? And I think, for me, magic usually comes from a place of bravery or love or blood. In the moments you stand up and say “I don’t give a fuck”. There is a lot of power in not giving a fuck. But also the moments you say “Hold up, I actually do give a fuck about this.” Because there’s also a lot of power in caring.

DJ: What are the different worlds in the stories of Heroine Chic like? How do you establish setting in fiction that’s so short in terms of word count?

James: A lot of my stories start with a single idea. A single “what if”? Using examples from the book, this can be as simple as ‘what if a prince fell in love with a dragon?’, to the more pointed ‘what would a school of magic look like, if you include the classism and sexism of the British educational system?’ and the straight-up weird ‘ok, but what if Robin Hood were a cyberpunk hacker and Maid Marion was sentient grey nano-ooze?’

And I think you can show a lot about a world with a simple ‘what if’. You take the kernel of the idea, you extrapolate to the most interesting, most wide-reaching ideas … and then you let the reader fill in the rest of the blanks. Once you have the engine of ‘what if’ in motion, you can conjure up a whole world with a few sentences that ask the right questions…

So … I hope the worlds of Heroine Chic are evocative. I hope the futuristic worlds seem both alien and also like plausible destinations. I hope the fantasy worlds feel wondrous, but also kind of terrifying. I hope the fairy tales/legends feel familiar, but also transformative and surprising.

DJ: What was your favorite part about writing Heroine Chic?

James: Honestly? Because a lot of these went up on my Facebook and on Tumblr before eventually making their way to the book … my favourite part has always been when someone tells me “Yes. This.” When I capture and experience in a way that gets it right and that takes the inspiration people gave to me and gives them something inspiring or wondrous back.

James: I hope they’ll be talking about how cool the heroines are. I hope it’ll get people talking about the cool new worlds they got to see and maybe what those worlds say about ours. Mainly, I’ll just be happy if they’re talking about it at all!

DJ: When I read, I love to collect quotes – whether it be because they’re funny, foodie, or have a personal meaning to me. Do you have any favorite quotes from Heroine Chic that you can share with us?

James: So, the story that I think first caught the eye of my publisher. The one that they referenced in our first meeting, is a story about a dragon and a knight. And I’m really fond of the way the wild and the ordered (and also the noble and the monstrous) meet in that story. And there’s a bit that goes:

“‘From the wildness in your eyes, I see that you are not a knight but a dragon. Join me in the skies.’

And the Knight left her steed behind and climbed up on the Dragon’s back and they spiralled like smoke up to the heavens.”

DJ: Now that Heroine Chic is released, what is next for you?

James: So, I’m continuing to write stories that go up on the tumblr. Trying to keep the average at about one story every weekday (to keep my patreon subscribers happy).

And, who knows, maybe someday a few of these stories will eventually make their way into something novel-length…

DJ: Before we go, what is that one thing you’d like readers to know about Heroine Chic that we haven’t talked about yet?

*** Heroine Chic is published by Inspired Quill and is available TODAY!!! *** 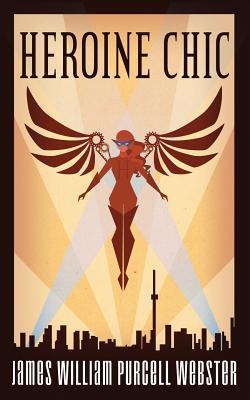 “I am the girl the Lost Boys lost.”

Queens and Scoundrels. Witches and Rebels. Grifters and Goddesses. These are stories about heroines.

From prolific poet and writer James Webster, featuring 52 very short stories, Heroine Chic is a celebration of the heroine’s place at the heart of science fiction, fantasy, and reality. Told with humour, daring, and gorgeous lyricism, these are tales of magic, love, adventure, SCIENCE! and much more.

James is an inveterate scribbler of poetry and prose who can most reliably be found writing weird little stories online, on a stage somewhere, doing something that can only be described as ‘proclaiming’.

As a poet, he’s won multiple slams, performed up and down the UK (mainly down) and written two full-length spoken word theatre shows (50 Shades of Webster and Poor Life Choices) that he’s performed at various festivals and even one sci-fi convention.

When not performing, he’s had poetry published in a couple of anthologies, but most often publishes microfiction and flash fiction on his tumblr, Strange Little Stories. His first book, Heroine Chic, collects 52 stories about female and non-binary protagonists and is published by Inspired Quill.

James likes his stories the same way he likes his friends/partners: somewhat surprising, perfectly formed and weird as hell.

Oh, and he lives in Oxford. In case any of you were interested.