DJ: Hi Peter! Thanks for agreeing to do this interview!

Peter Clines: Hey.  Most everything about me is pretty boring and cliche. Sorry.  I’m from a really old New England family.  After college I moved to California, one of those out of nowhere decisions that freaked out my family a bit.  I did concert and theater work for a little bit, and that led to the film industry where I worked as a crewperson for years.  Then I got out and wrote about the film industry for a few years.  And now I just write.

I mean, there was a lot of writing before then.  I’ve been trying to do this since I was ten or eleven.  But that’s when fiction became my full time occupation.

DJ: What is Paradox Bound about?

Peter: Paradox Bound is about a young man, Eli Teague, who’s never gone anywhere or done anything, until he takes the plunge and tries to help this mysterious woman who keeps showing up in his little town every few years.  And this gets him drawn into a sort of cross-country treasure hunt.  So it’s kind of a time travel/road trip/adventure novel with some creepy edges on it.  Hopefully.

DJ: What were some of your influences for Paradox Bound?

Peter: There were a couple.  The thing that started me first thinking of it was re-reading Neil Gaiman’s Neverwhere and wondering what an American version of that very-London story would be like. There were also some classic sci-fi roadtrip stories I remembered, like Roger Zelazny’s Roadmarks and Alan Dean Foster’s To The Vanishing Point.  And there was some movie when I was young about a time-traveling car…

Peter: Well, Eli’s our everyman, the way into the story. He’s got kind of an ehhhhh life after college.  I think a lot of folks go through that.  We expect to get out of school and then boom life begins. But a lot of the time people end up in this sort of limbo. We end up with crap jobs and low-end apartments and we’re left wondering “wait… shouldn’t things have happened by now?  Did I screw up somewhere?  Was there something else I was supposed to do?”  So Eli finally takes his big step forward, and it turns out to be a much bigger leap than he expected.

Harry’s our action hero.  She’s been at this for a while, and she’s got the tools and the experience.  Considering she comes riding into Eli’s life and–unintentionally–inspires him, I wanted her to be as far from the “manic pixie dream girl” trope as possible.  She’s not here for him.  So she’s kind of grim with a dry sense of humor. She ‘s brutally pragmatic at times.  And she has a huge arsenal of profanity, picked up from three hundred years of history.

DJ: I am a big fan of time-travel stories, and I have noticed that there basically two types of stories: those that focus heavy on science and go in-depth into the mechanics and technology behind it; and those that use it a plot piece/tool that is major to the story or used to enhance the story. Which of these does Paradox Bound?

Peter: I’d agree with that, yeah.  Paradox Bound is probably more of the second.  One of the main things I wanted in this was to have time travel be this sort of hand-me-down bit of knowledge. We all know how to do it, but nobody’s exactly sure how it works. Most people are probably reading this on a phone or a laptop, but how many of us actually know how those machines work?  We just accept they do and move on with our lives.  So there are time travel aspects and elements in the book that are deliberately vague, because people are making sort of half-guesses at why this works the way it does.

Peter: I have no clue.  I’m honestly still amazed whenever people pick up my books. I know that sounds like fake modesty, but it’s true.  I’m still just in awe that anyone reads these things I scribble down.  And then wants to read more.

If I had to throw out a wild guess… I think people will talk a lot about Harry’s profanity.  Or maybe the train. Or Fifteen.

I have no idea what they’ll be talking about.

DJ: Did you have a particular goal when you began writing Paradox Bound? Was there a particular message or meaning you are hoping to get across when readers finish it? Or is there perhaps a certain theme to the story?

Peter: Honestly, I wanted to talk–in the book–about America.  The ideal version we like to imagine versus the simple reality of where our country is on a bunch of issues.  The different mindsets and views. The divisiveness and how people choose to remember/interpret different events in our past.  I think it’s important to talk about these things, and a book that’s (literally) exploring history could be a fun place to do that.

But I was writing it all through 2016, and we were just seeing so much stuff come out.  I’d finish a draft and then just sigh, because it felt like everything I was trying to say was so… I don’t know, simplistic?  Unrealistic? Naive? There were a few points where I just kinda threw my hands up and thought “Why am I even bothering with this?”

And then my editor reminded me that lots of people are still going to see Captain America movies, so…  I kept at it.

DJ: When I read, I love to collect quotes – whether it be because they’re funny, foodie, or have a personal meaning to me. Do you have any favorite quotes from Paradox Bound that you can share with us?

Peter: There’s a couple I’m kind of proud of. Some of those lines I just scribbled out more or less how I thought the character would say them, and then later realized how nice they sounded.

“Life’s not something you tuck away and wait to use. Life runs out. Every day, every minute, whether you use it or not.”

DJ: Now that Paradox Bound is released, what is next for you?

Peter:  I’ve been playing around with a few different things.  Right now I’m about ⅔ through a sci-fi/horror story I’ve wanted to tell for a while.  After that my agent and editor and I have been batting a few things around. There’s a superpowers/hero story I’d like to tell, something that’s not part of the Ex-Heroes series.  Plus a sort of classic monster idea.  And another book set in the Koturoverse.

I’m not really short on ideas.  It’s more about getting myself organized and figuring out what I’m working on next.

DJ: Before we go, what is that one thing you’d like readers to know about Paradox Bound that we haven’t talked about yet?

Peter:  Nope. I really hate spoilers on any level. Anything cool about the book I hope readers discover for themselves.

Peter: No problem at all. Thanks for thinking I’d be mildly interesting to talk to.

*** Paradox Bound is published by Crown Publishing Group and is available TODAY!!! *** 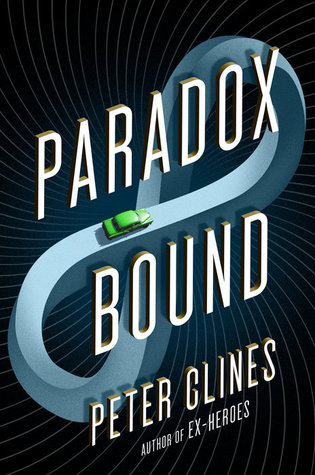 An ingenious, irresistible new time-travel thriller from the author of The Fold and the Ex-Heroes series

Eli’s willing to admit it: he’s a little obsessed with the mysterious woman he met years ago. Okay, maybe a lot obsessed. But come on, how often do you meet someone who’s driving a hundred-year-old car, clad in Revolutionary-War era clothes, wielding an oddly modified flintlock rifle—someone who pauses just long enough to reveal strange things about you and your world before disappearing in a cloud of gunfire and a squeal of tires?

So when the traveler finally reappears in his life, Eli is determined that this time he’s not going to let her go without getting some answers. But his determination soon leads him into a strange, dangerous world and a chase not just across the country but through a hundred years of history—with nothing less than America’s past, present, and future at stake.rebellion is the least of their worries.

Peter Clines grew up in the Stephen King fallout zone of Maine and–inspired by comic books, Star Wars, and Saturday morning cartoons–started writing at the age of eight with his first epic novel, LIZARD MEN FROM THE CENTER OF THE EARTH.

He made his first writing sale at age seventeen to a local newspaper, and at the age of nineteen he completed his quadruple-PhD studies in English literature, archaeology, quantum physics, and interpretive dance. In 2008, while surfing Hawaii’s Keauwaula Beach, he thought up a viable way to maintain cold fusion that would also solve world hunger, but forgot all about it when he ran into actress Yvonne Strahvorski back on the beach and she offered to buy him a drink. He was the inspiration for both the epic poem “Beowulf” and the motion picture-Raiders of the Lost Ark-, and is single-handedly responsible for repelling the Martian Invasion of 1938 that occurred in Grovers Mills, New Jersey. Eleven sonnets he wrote to impress a girl in high school were all later found and attributed to Shakespeare. He is the author of numerous short stories, EX-HEROES, EX-PATRIOTS, –14–, THE EERIE ADVENTURES OF THE LYCANTHROPE ROBINSON CRUSOE, and an as-yet-undiscovered Dead Sea Scroll.