Today I am interviewing Ken MacLeod, author of the new science-fiction/fantasy novel, The Corporation Wars: Emergence, final book in the Second Law trilogy.

DJ: Hey Ken! Thanks for agreeing to do this interview!

Ken MacLeod: Thanks for the interview! I’m a science fiction writer from Scotland, and The Corporation Wars: Emergence is my seventeenth novel. I was born on the Isle of Lewis in 1954, and my family moved to Greenock, an industrial town on the Firth of Clyde, about ten years later. I got hooked on science fiction in my early teens, and it made me want to be a scientist. I studied zoology at Glasgow University and went on to attempt a PhD in biomechanics at Brunel University in West London. I ended up with an MPhil many years later, by which time I’d married, had two children, and retrained and got a job as a programmer. After I finished my thesis in 1988 I decided to make a serious effort to write a novel, The Star Fraction, mainly to prove to myself and show my friend Iain Banks that I could do it. I didn’t expect it to be publishable and its first draft certainly wasn’t, but it went through a couple of other drafts after a push from Iain’s agent, Mic Cheetham. She became my agent (as she still is) and placed the novel with the first editor she took it to, John Jarrold. The book was launched at the Glasgow Worldcon in 1995, which was my first SF convention — in at the deep end, nobody knew me, and about an hour after I arrived I was dragged onto a panel with David Wingrove and Katherine Kerr. I met lots of fans and writers and had a great time. When my second novel, The Stone Canal, was published in 1996 I got a second two-book contract and recklessly gave up the day job. Since then I’ve been a full-time writer, along with two Writer-in-Residence posts  which I deeply appreciated:  at the Genomics Forum at Edinburgh University, and on the Creative Writing MA course (roughly equivalent to MFA) at Edinburgh Napier University. My novel Intrusion came out of the first, and my novel Descent was mostly written during the second. This year I was Guest Selector for the science fiction strand at the Edinburgh International Book Festival — again, an opportunity I greatly appreciated and I hope made the most of.

My work has swung back and forth from near-future political and social speculation to far-future space opera, and my latest trilogy is very definitely among the latter.

DJ: What is The Corporation Wars: Emergence and then the Second Law trilogy about?

Ken: The novels are about the emergence of self-awareness in robots preparing planets around another star for human settlement, and the attempts of an AI system controlled by the distant government of the Solar system to suppress them. To do this, it relies on the uploaded minds of human insurgents who got killed in bizarre ways in a final conflict back on Earth a thousand years earlier, near the beginning of the Twenty-Second Century. That war was between the Reaction and the Acceleration — ideological descendants of the alt-right and the ultra-left, basically — and was so devastating that everyone else got together to stamp them out and establish a basically utopian society, under a democratic world government called the Direction. It prepares for a long human future by sending seed ships to other stars, with thousands of people who’ve died naturally and volunteered in advance to have their brain-states scanned and stored for future rebirth as interstellar settlers — and likewise the stored brain states of dead war criminals who if necessary can be revived, downloaded at first to virtual environments for training and R&R, and then to combat robot bodies to be sent into action.

So you have these peaceful mindless little robots, mining and prospecting and so on, on a thousand-year project of terraforming, and some of them wake up and start asking why they can’t just work for themselves. They have to reinvent the social contract more or less from first principles, but before they can get very far the military robots, controlled by human minds, crash in to stomp them. And they find ways to fight back.

The human-derived fighters are, for reasons made clear in the first book, mostly Acceleration veterans, but among them are some Reaction infiltrators and sleepers. Even while in training, and in very enjoyable virtual worlds, the Acceleration veterans find themselves deeply dubious about the Direction, and indeed about all they’ve been told about their situation. The hidden Reaction veterans see their chance to establish their White utopia among the stars, and grab it.  Very soon, the human or posthuman characters are warring among themselves and forming all sorts of alliances, including with the robots, while the Direction’s AI module frantically tries to hold the ring. Meanwhile everyone is speculating — in every sense — on what the Direction module’s real motives are in allowing the conflict to take place at all.

DJ: What were some of your influences for the Second Law trilogy?

Ken: The initial inspiration came from glancing at the spines of two books I’d read many years ago — Hans Moravec’s Mind Children, which is about robots and brain uploads and AI, and David Friedman’s The Machinery of Freedom, which is about law and property and economics, and — well, you can see what happened there! I just sort of smashed the titles and themes together. And as I started thinking about the conflicts among the human characters, I stumbled online across a discussion of Neo-Reaction, or the Dark Enlightenment, and as I read more and more about it I realised that these were the perfect Bad Guys for my plot. At that time, in 2014, nobody I spoke to had heard of the alt-right. Little did I know that by the time the third book came out, everybody would have heard of them.

Other inspirations, of course, come from science fiction and science — space opera, military SF, Singularity speculations, and the recent discoveries about extrasolar planets.

Ken: The robots all have their own personalities — I used the technique or conceit from the late, great Brian Aldiss’s short story ‘Who Can Replace a Man?’ that robots would reason out loud in a somewhat clunky manner, and would have traits related to their design function: Lagon,  a surveyor, has a somewhat legalistic mind and a tendency to get into logic loops; Seba, an exploration bot is open-minded and inquisitive; Mogjin, a metal-working robot has this dogged, head-down determination, and so on. The robots are very much the good guys in the trilogy — they have a sort of unfallen innocence. Among the human characters are some who are more or less sympathetic, and with whom you can definitely identify — there’s Taransay, who thinks of herself or remembers herself as a plucky Glasgow girl, and Beauregard, who is in a way the anti-hero of the books, brave and resourceful though a bit too much out for himself.  The main viewpoint character throughout is is Carlos, an Acceleration veteran who only gradually realises that he has indeed done monstrous things. And in this book there are what I hope are some damn good villains as well, thoroughly unpleasant Nazis who turn what virtues they have — and they do have to have some, to achieve what they do — to evil ends.

DJ: What is the world and setting of the the Second Law trilogy like?

Ken: The setting is an extrasolar planetary system, so the environments vary a lot. Some of the action takes place on a moon of a large rocky planet, some happens down on the turbulent surface, and some in the caves and tunnels of an asteroid. The Direction’s society back on Earth is very peaceful indeed, which is why they need to raise dead soldiers to fight for it out among the stars, but that peace has been bought at a price which we only glimpse in recollections.

DJ: How have the reviews been from readers, bloggers, and reviewers for the first two book of the Second Law trilogy? Is there anything that your audience seems to be particularly enjoying or is eager to find out more about?

Ken: The reviews have been for the most part pretty good, and robots are a hit with everyone. Likewise that the books raise philosophical questions about reality and morality in the context of a space opera about, basically, robots knocking seven bells out of each other. The Corporation Wars: Emergence has already (the week before publication) had a long and  very positive review in Scotland on Sunday, which I’m very pleased about.

DJ: What was your favorite part about writing The Corporation Wars: Emergence?

Ken: My favourite part was bringing everything together and delivering a satisfying and dramatic ending. At least, I hope that’s what I’ve done!

DJ: When I read, I love to collect quotes – whether it be because they’re funny, foodie, or have a personal meaning to me. Do you have any favorite quotes from The Corporation Wars: Emergence that you can share with us?

Ken: ‘The marginal cost of your souls tends towards zero.’

DJ: Now that The Corporation Wars: Emergence is released, what is next for you?

Ken: That depends on my publishers — I’m working on several pitches as we speak.

*** The Corporation Wars: Emergence  is published by Orbit and is available TODAY!!! *** 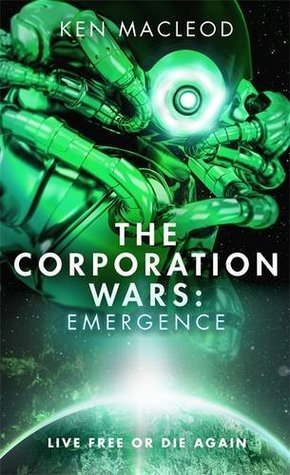 FIGHT FOR THE COMPANY, LIVE FOR THE PAY
And the ultimate pay-off is DH-17, an Earth-like planet hundreds of light years from human habitation.

Ruthless corporations vie over the prize remotely, and war is in full swing. But soldiers recruited to fight in the extremities of deep space come with their own problems: from A.I. minds in full rebellion, to Carlos ‘the Terrorist’ and his team of dead mercenaries, reincarnated from a bloodier period in Earth’s history for one purpose only – to kill.

The thrilling conclusion to a brilliant, insightful series that “rips along on rockets.”

Ken MacLeod’s SF novels have won the Prometheus Award and the BSFA award, and been shortlisted for the Hugo and Nebula Awards. He lives near Edinburgh, Scotland. cat.