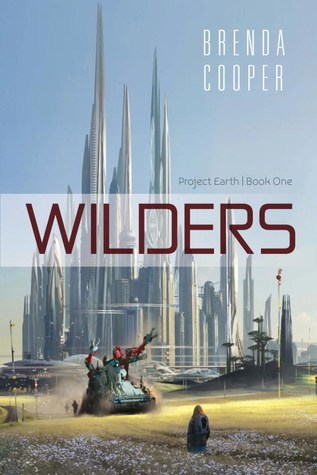 Coryn Williams is left behind in the megacity of Seacouver after her parents commit suicide and her sister, Lou, flees the city to work for a non-governmental organization (NGO) in the wild lands. For company, Coryn has her companion robot, Paula, who helps her get through school, keeps her safe in the city, and acts a coach for her in many things — including running marathons. But Coryn misses her sister. When she graduates from high school, she is required to choose a profession. She refuses, instead choosing to “go feral” and leave the safety of her city to find Lou. She abandons most of her technology, which will not work in the wilds anyway, but brings along her robot companion, Paula.

Wilders explores the relationship between the two sisters, between the megacites and the wild lands, and between a city girl and her robot protector. Coryn must grow up during a science fictional adventure full of drone flights and fights, frightening ecobots, and dangerous weather.

*Disclaimer: I received an ARC of this book from the publisher, in exchange for my honest opinion and review.

Coryn and her older sister, Lou, were growing up inside the megacity, Seacouver, when a horrific event happens: both their parents commit suicide. As a result, when Lou becomes of age, no longer wanting to bear living in the megacity anymore, she moves to the Outside, to help repopulate and protection the wild.

Once Lou leaves, Coryn becomes more lonely, Lou’s letters become less and less, and the only friends she has are her companion bot, Paula, and an older women whom she meets running one day, Julianna. While these are two are dear friends to her, they are still nothing compared to her sister, so when Coryn becomes of age, she too decides to leave Seacouver to surprise her sister Lou with a visit.

Unfortunately, what the news and media of the city has led the people of the city to believe about the Outside is far from the truth, and there may be a reason that Lou hasn’t been writing anymore…

If you were to go back and read my review of Edge of Tomorrow, you would see that something I was very impressed with was how Brenda used her to characters to capture the wildlife and nature of the planet, and that after I finished the story, I then found out that she had a passion in the environment and it suddenly made sense to me why so much care and time had been put into explaining the environment in the story. In short: I was very impressed with Brenda’s descriptive writing of the planet. However, what I loved most about her writing were the futurist ideas, and this switching of the story focusing on the environment rather than the futurist ideas…. I do not believe it went well.

Throughout the story, we are surrounded by companion bots, ecobots, wristlets, VR-devices, and numerous other types of advanced technology – all of which I loved and was fascinated by! Brenda, again, gets an A+ on her futurist ideas! But I wanted to keep learning more about them! I would have rather had a story focused around that instead of a naive girl getting mixed up in political corruption. Reluctantly, I believe that is where the story goes wrong.

Coryn is a very very sweet girl. But, oh my gosh, is she a sheltered creature. Very stubborn, immature, typical teenager who believes that she can handle the wild (pun-intended) all on her own with no help, and that traveling all these miles alone with her robot to surprise her sister without notice (why would someone need to know where she was in-case something happens to her, right?) is a good idea… -_-

I’ll be honest: I hated her character. Extremely frustrating to read because of how young and foolish she felt! But that’s a good thing! The only reason I hated her was because I was so attached and cared for her at the beginning. You really do feel her pain of the loss of her parents and of basically her older sister (and only living family member) too. But how she went from this child, to this girl at the end, who is essentially leading a rebellion, rescuing her sister, and having all eyes on her… there was definitely some character development missing there, because I did not see how that transition was a possible when I was reading.

As for the plot… it held me at the beginning when we are first learning about the Outside and the megacities, and types of technology we have… but when it becomes clear that the plot will be focused on this political scheming between the two… it had a lot of difficulty holding my interest… particularly when topics such as “should companion bots be treated as humans” get left open and we instead get stuck with watching Coryn get herself nearly killed for the tenth time in the novel.

I do not think was a bad story, and I am sure many people will love and empathize with Coryn and that will easily take them through the story. But for me, it is not enough. Our main protagonist development was missing a couple major marks to get to get to where she ended up in the end, her relationship with the secondary characters, has the same issues too. And the plot, while it was a good idea, just did not deliver on execution, and reading felt very slow to me at many times. The best part, as I said, was the technology ideas, but sadly, as I said, Brenda decided to put that in the background this time.

I believe I understand what Brenda was trying to get across with novel: the importance of caring for our wildlife. But I, personally, was not a fan of the way she choose to tell the story.

After reading three of her novels, I firmly believe that Brenda is a better storyteller when she puts her futuristic ideas at the center of her story to build on.