Today I am interviewing Gareth L. Powell, author of the new omnibus, Ack-Ack Macaque: The Complete Trilogy, a collection of the three books in the sci-fi trilogy, Ack-Ack Macaque trilogy.

DJ: Hey Gareth! Thanks for stopping by to do this interview!
For readers who aren’t familiar with you, could you tell us a little about yourself?

Gareth: I’ve written eight novels and two collections of short fiction. I’ve won the BSFA Award for best novel, and been a finalist for the Seiun Award in Japan. I live in Bristol, in the South West of England, and enjoy reading, tea, and the smell of bookshops.

DJ: What is the Ack-Ack Macaque trilogy about? 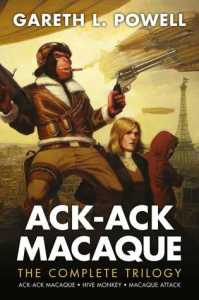 Gareth: Put simply, it’s an alternate history thriller in which a handful of unlikely characters set out to investigate a murder and end up having to save the world.

DJ: What were some of your influences for the Ack-Ack Macaque trilogy?

Gareth: While I was writing, I wasn’t particularly aware of any specific influence, but looking back after the fact, I’d have to say that you can definitely see traces of influence from Michael Moorcock’s Cornelius Quartet, which I read at an impressionable age, as well as work by Philip K. Dick and William Gibson.

DJ: Could you actually tell us a little about the first book in the trilogy, Ack-Ack Macaque, too? (Seeing as how this is where readers will be starting) 😛

Gareth: The first book introduces us to the setting, which is a Europe in which the UK and France agreed a political merger in the late 1950s, following an unexpected victory in Suez. The action takes place a century later, and follows former journalist Victoria Valois as she tries to discover why someone killed her ex-husband and scooped out his brain.

DJ: Could you briefly tell us a little about your main characters in the trilogy? Do they have any cool quirks or habits, or any reason why readers will sympathize with them?

Gareth: As mentioned, one of the main characters is Victoria Valois. She used to be a journalist before she suffered a devastating head injury. Now half her consciousness runs on artificial processors, and she’s no longer sure which of her thoughts are hers, and which are the machines. The other is, of course, the eponymous monkey. I don’t want to give too much away upfront, but the main arc of the trilogy follows his development as a person. It is almost literally the story of how he grows up to be an adult.

DJ: What is the universe/world  for the Ack-Ack Macaque trilogy like?

Gareth: As I mentioned, the books are set in an alternate Europe. Things are similar to our world, but there are subtle and telling differences in the culture and the technologies used. Spotting them is half the fun of reading the books.

DJ: What was your favorite part about writing the Ack-Ack Macaque trilogy?

Gareth: Writing Ack-Ack was a lot of fun, especially when writing scenes with the monkey. He’s like the Hyde to my Jekyll. The trouble is, as such a larger-than-life character, he has a tendency to steal every scene that he’s in; so I had to use him sparingly, and ensure the other characters were just as vivid in their own ways. You could say he made me “up my game” when it came to writing the other characters.

DJ: What was your goal in writing the Ack-Ack Macaque trilogy? Was there a particular message or meaning you are hoping to get across to readers when it is finally told?

Gareth: I decided to write about the nature of what it means to be human. I had touched on the theme in my two previous books, but now wanted to examine it more overtly. To do so, I’d come up with a near-future murder mystery set in an alternate world, complete with mind-recorders (or “soul-catchers”) and huge nuclear-powered Zeppelins. I had two of the main characters: a former journalist who has had most of her brain replaced with artificial processors following an accident; and a young man who doesn’t realise that he’s been synthetically created and grown in a laboratory from cells provided by his mother. I wanted to look at humanity through the eyes of people who weren’t sure whether or not they qualified as ‘human’. The first had been human, but now didn’t know what she was; the second thought he was human, but then found out he was something else. What I needed was a third viewpoint: an animal that had never been human, and had been ‘uplifted’ to consciousness.

DJ: I’m always curious when authors finish a series, how close to the original course they stayed when it is finally completed or if it ended up evolving and changing. Did the plot stay the same as you had first imagined it? How about the ending? Evolution of your characters?

Gareth: The first novel was written as a standalone. When I got the go-ahead to write a sequel, I decided to upset the applecart and take the series to a whole new level. And then, when Solaris agreed to take a third and final book, I was faced with the task of pulling together not only plotlines and characters from the previous two Ack-Ack books, but also from my 2011 novel, The Recollection. By the time I reached the end, the main characters had all changed and grown considerably, and so I felt I’d really been on a journey with them. And to tell the truth, I was a bit sad to say goodbye.

DJ: Having your whole trilogy being released as a single omnibus must be exciting!

Gareth: It’s fantastic to see the novels collected together in a big doorstop of a volume. It makes the trilogy feel like a real achievement. And this new edition has given me the chance to write a brand new final coda to the series—an extra chapter that’s never appeared anywhere else, and finally reveals the monkey’s ultimate fate!

DJ: When I read, I love to collect quotes – whether it be because they’re funny, foodie, or have a personal meaning to me. Do you have any favorite quotes from Ack-Ack Macaque trilogy that you can share with us?

Gareth: Almost everything Ack-Ack says is quotable, and quite often blisteringly profane. I don’t think I’ll repeat any of them here.

DJ: Once the Ack-Ack Macaque: The Complete trilogy is released, what is next for you?

Gareth:  I have a new novel EMBERS OF WAR coming out from Titan Books on 20th Feb 2018. This is the start of a brand new trilogy set in the far future, featuring talking spaceships, ancient alien ruins, and all sorts of science fictional goodness.

DJ: Before we go, what is that one thing you’d like readers to know about Ack-Ack Macaque: The Complete Trilogy that we haven’t talked about yet?

Gareth: It’s smart, it’s got an edge to it, and it’s so much more than just a funny book about a talking monkey.

*** Ack-Ack Macaque: The Complete Trilogy is published by Solaris and is available TODAY!!! *** 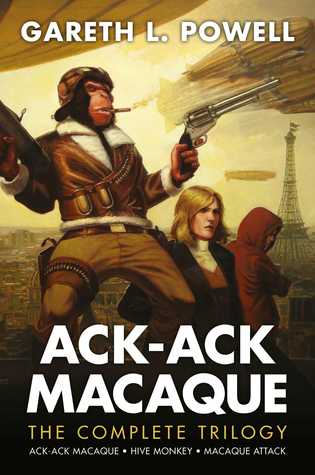 The complete omnibus collection of the startling, fast-paced SF starring a cigar-chomping monkey, nuclear-powered Zeppelins, electronic souls and a battle to avert armageddon. A new edition in the Solaris Classics selection.

Welcome to Europe in 2058, a place where Britain and France have been united for a century and vast, nuclear-powered Zeppelins carry passengers between Paris, London and New York.

When former journalist Victoria Valois starts investigating the murder of her ex-husband, she attracts a motley assortment of unlikely allies—including a surgically upgraded monkey who drinks, smokes and curses, and can even fly a plane!

Collected together here for the first time in one volume, the award-winning Ack-Ack Macaque novels are a gripping examination of what it means to be truly human. And in Ack-Ack Macaque, they introduce us to one of literature’s most unpredictable and exciting heroes.

Gareth L. Powell is an award-winning author from the UK. His alternate history thriller, Ack-Ack Macaque won the 2013 BSFA Award for Best Novel, spawned two sequels, and was shortlisted in the Best Translated Novel category for the 2016 Seiun Awards in Japan. His short fiction has appeared in a host of magazines and anthologies, including Interzone, Clarkesworld, Solaris Rising 3, and The Year’s Best Science Fiction, and his story ‘Ride The Blue Horse’ made the shortlist for the 2015 BSFA Award.

He is also writing a crime thriller.