Contest: Mistress of Crystals: Chronicles of the Second War of the Gods by Justyna Plichta-Jendzio 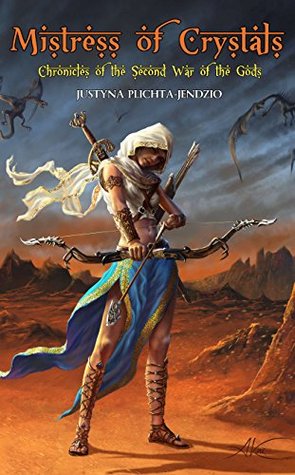 The tears of the goddess Mirge must be found.

Thousands of years ago the beings of Naor, forced to stand against Hodgorn, god of darkness, won. Yet evil survived and now the empire prepares for the final battle. Hodgorn is determined to return, conquer, and rule in place of his brother Ulse, god of light. As he gathers his forces, the only hope is Ainara, Mistress of Crystals, a girl with a pure soul, chosen by the gods to rule the power of the Agarniles, the diamond tears, Mirge’s legacy.

Divided between the Elves, Dwarfs, and Humans to safeguard them, the Arganiles must be reunited and the Mistress must harness their power. Supported by a priest, the Pharaoh’s son, two protector warriors, Ainara sets forth on a dangerous quest which will demand sacrifice and all her courage, insight and tenacity.

But as with every human soul, Ainara is not absolutely pure and the Arganiles will not tolerate any evil or imperfection. Ainara is in danger.

Have you ever wanted to own a hand written and hand decorated manuscript, like the old Medieval manuscripts? Now you have a chance. Each one of you can win in a draw a manuscript with a text of my fantasy story “Servant of the Gods”. There is only one original manuscript available and five printed copies. Though the work on the manuscript is still in progress it shall be finnished before January 31. In its final form it will be covered with leatherette material to make the book look like an ancient item. Eighty pages will be hand decorated and contain few paintings (illuminations).
To check the present stage of the manuscript follow this link: https://www.facebook.com/worldofnaor

Reviews must be left on Amazon and Goodreads – you must email me (hydrotech35@wp.pl) links with the reviews.

Each of above books are 3 points (3 chances).

The contest will be settled February 14, and I will announce a main winner and five second places on my FB page (https://www.facebook.com/worldofnaor/), also directly email the winner the good news.

I was born in Koszalin, Poland, in 1974, and am still a resident of that town. I have been married for 21 years, am the mother of one son, and the happy owner of three spoiled cats. I was lucky to live at the turn of two ages: communism and capitalism. When I was fifteen, communism fell in Poland. But that time allowed me to see a different reality incomprehensible to future generations. It was also a chance to “touch” the past and have a glimpse at the remains of the nineteenth century life which survived, especially in the eastern parts of Poland till the end of 80s of the last century.

I started writing due to the rarity of fantasy literature, which in that time was not as popular in Poland as it is now. There were only a handful of Polish writers who were occasionally published, and slightly more foreign authors. It was not enough for me, so I started to write and create my own fantasy world. For many years, like most of the other authors, all my works ended up in desk drawer. Finally, some of my friends read my stories and part of a big novel. They convinced me to publish my works.

My works are very strongly influenced by my wide range of interests. I am fond of ancient and medieval history. I have also learned a great deal about the history of two of the world’s main religions and their influence upon societies, global and local policy, and the development of civilisations. I like to study different cultures, especially those that might be considered exotic, both present and ancient. I am fond of nature and geography. As a writer I love to read ancient legends, myths, and mysterious stories. All of this can be seen in my works.

Like Loading...
Tagged contest, Justyna Plichta-Jendzio, Mistress of Crystals: Chronicles of the Second War of the Gods