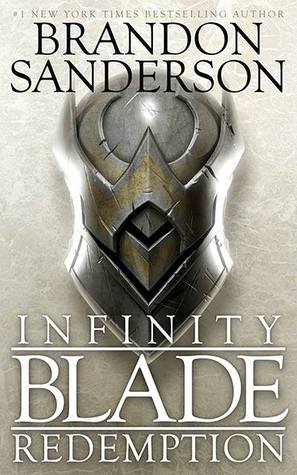 Whoever it was that had the idea to get Brandon Sanderson to write these was a genius!

Long months have passed since Siris and the God King, enemies betrayed together, were left to rot in the prison at the Vault of Tears. Their true enemy – the Worker of Secrets, creator of the Infinity Blade itself – now reigns. Upon finally obtaining freedom, Siris must unravel plots that seem to make no sense, lead a rebellion with no direction, and fight against the division with his very heart. The secrets unraveled will dig backward in time toward the origins of the Deathless and the true nature of the world itself…

From #1 bestselling author Brandon Sanderson and ChAIR entertainment, creators of the blockbuster Infinity Blade video game series, comes the second novel in the epic Infinity Blade saga. This latest take delves deeper into the fantastical world of Infinity Blade, a world of mystery and intrigue where magic and technology are indistinguishable, and even life and death are not as they seem.

After finishing Infinity Blade: Awakening, I could not wait to dive right into the next one! I read a quick summary of Infinty Blade II online (just to refresh my memory) and it was time to go! And just like Awakening, Redemption did NOT disappoint 🙂

Siris and Isa fought their way to free the Worker from the prison and succeeded – except for one thing… the only way he is allowed leave his prison is if someone takes his place, and for that, the Worker forced Siris. It only seem fitting, seeing that Siris was the one who locked him up all those thousands of years ago. Oh! And did I mention the Worker gave him a roommate too? THe God King.

Now Siris must find a way to escape from this prison and stop the Worker before he can do whatever plan it is, that he has been scheming on for the thousand years…

Again, do you need to have played the Infinity Blade games to enjoy this story? No, you do not.

Do you need to have read the first novel let’s, Awakening, though? Yes, yes you do. As I have just outlined above, this story takes place after the events of the Infinity Blade II game, with Siris being locked up, and concludes with where the start of Infinity Blade III game is.

I only read the synopsis for Infinity Blade II because I wanted it fresh in my head – but honestly, I didn’t need to. All that happens in the game are the fights leading up to the actual freeing of the working. Aka, nothing that can’t, and wasn’t summed up by Sanderson at the start.

Unlike last time, this is not told solely from Siris’ perspective; we get two additional view points. First, there is Raidriar, The God King himself. This was a pleasant change. The story probably could have Ben told with only Siris again, but having Raidrair’s perspective added interesting enlightens to certain events. And of course, finally meeting the arch-villain and learning his motives and thoughts, readers may begin to question just how “evil” the God King is?

The second new point-of-view is going to be a man (I totally forget his name and my kindle is working and I can’t find any reviews online that mention it), who works as a statistical risk analyzer for some big company. When I first saw the words “accountant” and “manager”, I was as confused as ever… like, what was the present day doing in this story? But trust me: it works. And that subplot, of tying to figure out that mystery, was by far, the most exciting part for me.

As I was with Awakening, I did not want Redemption to end either and wanted to keep reading a story in this world; the only reason I felt it was too short was because I though it was that good.

Whoever it was that had the idea to get Brandon Sanderson to write these was a genius, because I don’t know how anyone could read these stories and not want to go play these games immediately.