DJ: Hi Bill! Thanks for agreeing to do this interview!

William C. Dietz: I’m older than I’d like to be, an avid canoeist, a world traveler, grumpy at times, appalled by what’s going on in Washington D.C., the beneficiary of a 50 year relationship with a very patient woman, a man who likes to have a gin and tonic at 4:00, and the author of more than fifty novels, two video games, and a clutch of short stories.

DJ: What is Battle Hymn and then the America Rising series about? 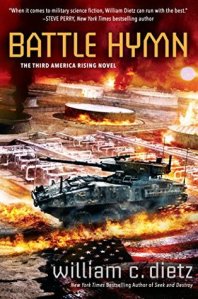 William: As the cover copy says, the Second Civil War continues to rage as Union president Samuel T. Sloan battles to keep America whole and, more than that, to restore the country to its former greatness.

“Wanted Dead or Alive.” Following a fateful battle between Union Army major Robin “Mac” Macintyre and her sister, the New Confederacy places a price on Mac’s head, and bounty hunters are on her trail.But there’s work to be done, and Mac is determined to help Sloan reunify the country by freeing hundreds of Union POWs from appalling conditions in Mexico and capturing a strategic oil reserve that lies deep inside Confederate territory.

However, to truly have peace it will be necessary to capture or kill the New Confederacy’s leadership, and that includes Mac’s father, General Bo Macintyre.

DJ: What were some of your influences for the America Rising series?

William: Wow, that’s a tough one. Well, first and foremost is the perception by me and millions of other people That oligarchs (with help from abroad) want to take full control of our country and use it for their own purposes.

As I write this our system of checks and balances, including a free press, have prevented them from doing so. But what if there was some catastrophe? Such as a swarm of meteors hitting Earth? The resulting disruption could give the oligarchs the opportunity they desire.

But there are those who would oppose them. And that, I reasoned, could trigger another Civil War.

But the America Rising series should be read as entertainment as well. And as such it owes a debt of gratitude to the thousands of adventure novels I have read and enjoyed during my life.

William: Robin Macintyre (Mac) comes from a military family, but unlike her sister Victoria, she was slow to follow tradition, and entered the service through Officers’ Candidate School rather than go to West Point, the way her father General Bo Macintyre hoped she would. And he’s fighting for the south.

That places Mac in a difficult position, as does her on again off again love affair with President Sloan, the man who is trying to restore the country’s rightful government. And, in addition to those factors, Mac is called upon to lead a number of harrowing special operations missions each of which requires her to make very difficult decisions.

DJ: What is the world and setting of the America Rising series like?

William: The America Rising Series takes place in 2018! The action occurs in a badly ravaged US of A. The government is broken. The military is divided north and south, large areas of the country are ruled by warlords, large segments of the population are starving,dust thrown up by the meteor strikes partially blocks the sun, crops are failing, and other countries are trying to take advantage of America’s weakness even as President Sloan battles to put everything back together.

DJ: How have the reviews been from readers, bloggers, and reviewers for the first two books of the America Rising series? Is there anything that your audience seems to be particularly enjoying or is eager to find out more about?

William: With the exception of some Libertarian Trolls, who didn’t like the first book, and launched a coordinated attack on it, other readers have offered a lot of very positive reviews. Those who are interested can access both on the usual sites.

In spite of that professional reviewers had some very positive comments:

Praise for Into the Guns

“William C. Dietz has produced an action packed, barnburner of a novel…This is a big blockbuster, big budget novel and the action is relentless…Into the Guns is hard military sci-fi in a post-catylyst American wasteland at its explosive best.”—The Bookbeard’s Blog

“Fans of military science fiction will have another strong series to look forward to…Dietz takes readers on an emotional roller coaster.”—Amazing Stories

“An interesting and delightful read, with a good mix of action, intrigue, and the occasional bit of levity…highly recommended.”—Game Vortex

“Dietz is a must-read for all military SF fans…If you enjoy an action story, strong military SF, or a good near-future Armageddon novel, be sure to read Into the Guns…you will be longing for the next volume as you finish the last page.”—Galaxy’s Edge Magazine

“Into the Guns doesn’t waste a second getting going right out of the gate…By the time you get to the last page, you’re out of breath. But things are only getting started.”—Pulp Fiction Reviews

The 2nd book, Seek And Destroy, has an average of 4.5 stars on amazon across 23 reviews as of today.most recent

DJ: What was your favorite part about writing Battle Hymn?

William: As is the case with the 3rd book in any trilogy the thrill and the challenge lies in bring all of the various threads together in a way that completes the overarching story and causes readers to finish the last page thinking, “Damn. That was good. I wish there was more.”

William: I don’t know, but I hope they’ll be talking about how enjoyable the series was, and the need to make sure that our society won’t break down along cultural/political/tribal lines.

DJ: Did you have a goal when you began writing the America Rising series? Was there a particular message or meaning you are hoping to get across when readers finish it? Or is there perhaps a certain theme to the story?

William: I think earlier comments, along with what I said in the previous paragraph, serve to sum it up.

William: I work typically work from a ten or twelve page outline, and stay true to it in most regards. But new ideas do make themselves heard and I try to I listen Plus a ten page outline is actually pretty vague when you think about a book running to ninety-thousand words. So a lot of what I write is organic in that sense.

But the characters developed the way I thought they would, the overarching plot, remained intact, and I am pleased with the outcome.

DJ: When I read, I love to collect quotes – whether it be because they’re funny, foodie, or have a personal meaning to me. Do you have any favorite quotes from Battle Hymn that you can share with us?

William: Uh, oh… I don’t have a list ready to go. Sorry about that. But I will say this, there are always lines that I feel especially proud of, and hope others like as well.

DJ: Now that Battle Hymn is released, what is next for you?

William: Who knows? At the moment I have a number of proposals in front of publishers. It would be nice if one of them is accepted. And if not? Then I’ll go canoeing.

William: For more about me and my fiction please visit williamcdietz.com. You can find me on Facebook at: www.facebook.com/williamcdietz and you can follow me on Twitter: William C. Dietz @wcdietz

*** Battle Hymn is published by Ace Books and is available TODAY!!! ***

From the New York Times bestselling author of the Legion of the Damned novels comes the final novel in a post-apocalyptic military science fiction trilogy about a nation wracked by a civil war.

As people fight to survive the aftereffects of more than a dozen meteor strikes, a group of wealthy individuals conspires to rebuild the United States as a corporate entity called the New Confederacy, where the bottom line is law. As a second civil war rages, with families fighting against families on opposite sides, Union president Samuel T. Sloan battles to keep the country whole.

After the fateful battle with her sister, the New Confederacy places a price on Union Army captain Robin “Mac” Macintyre’s head, causing bounty hunters to try to kill her. Mac will do all that she can to help Sloan reunify the country by reclaiming a strategic oil reserve in the heart of Confederate territory, and freeing hundreds of Union prisoners of war from appalling conditions in Mexico. But, to truly have peace, they will have to take down the New Confederacy’s leadership–and that includes Mac’s father, General Bo Macintyre.

New York Times bestselling author William C. Dietz has published more than fifty novels some of which have been translated into German, French, Russian, Korean and Japanese. Dietz also wrote the script for the Legion of the Damned game (i-Phone, i-Touch, & i-Pad) based on his book of the same name–and co-wrote SONY’s Resistance: Burning Skies game for the PS Vita.

Dietz grew up in the Seattle area, spent time with the Navy and Marine Corps as a medic, graduated from the University of Washington, lived in Africa for half a year, and has traveled to six continents.

Dietz has been employed as a surgical technician, college instructor, news writer, television producer and Director of Public Relations and Marketing for an international telephone company. Dietz is a member of the Writer’s Guild and the International Association of Media Tie-In Writers.

He and his wife live near Gig Harbor Washington where they enjoy traveling, kayaking, and reading books. For more information about William C. Dietz and his work visit: williamcdietz.com