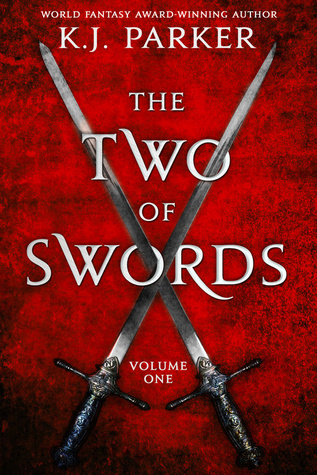 The amount of planning that went in to telling this story…

*Discalimer: I received an review copy of this book from the publisher, in exchange for nothing… yeah, told me I didn’t have to read, review, or even make a post I got it!

**The Two of Sword series was originally a serial novella series from 2015 through the end 2017, with a single novella coming out each month. There were 19 parts in total, and upon collection, they were broken up into a 3 volume set. The Two of Swords, Volume 1 contain the first 8 novellas.

You ever read one of those books, where when you finish it – or are maybe still reading – you have to take a second and appreciate in awe the amount of time and planning that the author must have put in? That was the exact type of reaction I had after the 6th novella.

There is a war that has been going for longer than anyone can remember, for reasons that nobody seems to know; all that is known that war between the East and West Empires, is fought between two of the greatest militantly minds that have ever lived – and who also happen to be brothers.

Normally, I’d go quite a bit more into the set up of the plot with what characters are going to do this and that, but to be honestly… that is actually 100% the plot of volume 1.

The reason I can’t go into it anymore than that is because of the way the story is told: rather than a certain number of select POV characters, instead, what Parker does is he chooses a different character for each novella, and from their POV he tells how the war, the story, is progressing. Don’t get confused. This is not, “Oh, DJ. I’ve read tons of novels where they change POV characters back and forth, going bouncing around the timeline.” No, not that is NOT what I said. Each POV character he only uses only once.

How the story goes is we stary off with Tuecer, a skilled archer. With him are a group of his friends, that included another man called Musen. The next POV is Mucen. In Mucen’s POV we meet another character X, and after Mucen is done, we go with X. With X, we meet Y, and then the next novella is with Y. You see how it goes?

The craziest part about all this? For each following novella, he always picks up the second after the previous POV ended. Not a moment is overlapped or skipped in the timeline between POVs, and it reads smoothers that you could possibly imagine.

For me to tell you about what each character is like would be a spoil because some characters you meet first in another POV, but when you get their own POV you then learn who they really are. For me to even tell you what characters get a POV (outside of Tuecer and Mucen) would be a spoil, because then you will know which characters are still alive and in which direction the story may be be going! Really, one of the only things I want to tell is that, to put it simply, the main character of this story is the war itself – for the Volume 1, at least.

The other thing I want to tell you about is the craftsman guild. Which is literally what sounds a like. A guild for craftsman. This has a very small role at start, barely noticeable in first few novellas, but by the end, you begin see Parker has something up his sleeve. What the craftsman have, or know how to do, is read Tarot cards. (Wait. Don’t go anywhere. Stay with me for a sec.)

I know nothing (shout out to my man up in the North) about Tarot cards, thus I have no idea if the cards he talks about and how to interpret them are the real thing or not. But these decks of cards, while they don’t have a major role per say in the first volume, undoubtedly hold secrets, and I’m sure if you could decipher the clues Parker is laying down for the reader in the story, there would be quite a reward at the end. A matter a fact, each chapter titled is named after after one of the cards, and coincides with a specific character.

The biggest issue I had, and it was right about when I had the realization of what Parker was doing that I was able to accept this, is that he is using the characters to tell us about the war. I loved Tuecer. He is still my favorite. But we don’t get anymore POVs outside of his first. For someone who is a character-reader first, this can be hard to swallow. When he wasn’t back by novella 4, I scanned though the book and saw he was nowhere to be found… but that was also when I began to look to what exactly what Parker was trying to do… and then, after the 6th novella, it suddenly all clicked with me and here I am writing this glowing review for The Two of Swords.

One last thing, that I must mention, is the pacing: this novel can be very slow at moments. If you have read anything by Parker before, you know exactly what I am talking. I would not call it a slow burn, but its more like little extra facts and world building, that you don’t necessarily need to know, but do help develop the world and story. I know some readers LOVE his prose and this aspect of his writing does not bother them. For me personally, it all depends on how caught I am in the story. If I’m glued to it, I read and love every second; if not, I have a tendency to skim over paragraphs.

This a essentially an alt-history story, so for those slow moments, I could see some readers saying it feels like they are reading a history book. Outside of the handful of slow moments, I am highly doubtful that many readers could have anything bad to say about the plot.

To tell this story how Parker is: passing it off from one character to the next, as they meet each other; having it so the story is always moving forward, never leaving any gaps out… the amount of planning that must have gone in to that? I cannot even imagine.