DJ: Hi Dan! Thanks for agreeing to do this interview!

Dan Jones: Hi DJ, thanks for having me! Smashing set of initials you’ve got there, by the way. I’m from London, primarily writing SF with a smattering of fantasy and horror, but I read almost anything. When I’m not writing my time is divided between my job at the UK Space Agency, where I work on the technology team (which yes, is pretty cool!) and my family. I live with my wife and two daughters in Essex.

DJ: What is Man O’War about? 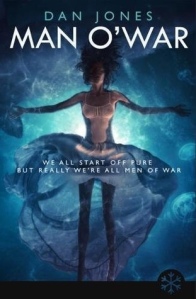 Dan: Dhiraj Om, a North Sea jellyfisherman, is hoping for a good catch to provide for his family, but happens upon an expected catch in his nets, a valuable but illegal pleasure robot, who calls herself Naomi. When he tries to sell this on the black market for a quick buck, the sale goes awry, sending both the police and the robot’s owner, a gangster named Agarkka D’Souza, on his tail. The botched sale has implications for a robotic tech developer, who wants to flood the robotic market – particularly the sex market – with new robotic emotional technology, and it reveals a web of corruption that spreads from London all the way down to Port Harcourt at the tip of the Niger Delta. As Dhiraj and Naomi go on the run, Dhiraj realizes that the journey is changing them in ways he didn’t expect, and he ends up seeing Naomi – who is essentially a complex system of actuators, software, advanced materials and sensors – as something quite different.

DJ: What were some of your influences for Man O’War?

Dan: One of the major projects I work on at the Space Agency is a space robotics programme. Being in the middle of a complex programme of technology development gives me insight into not only the technologies that drive cutting edge robotics systems, but also the corporate frameworks against which these activities are set. That probably doesn’t sound very exciting, but when such frameworks force people to act in ways that they might not ordinarily countenance – and it does happen: I’m minded to think of the Al-Yamamah deal between the UK and Saudi Arabia – which results in strange and unexpected consequences.
In terms of literary influences, I don’t think there was anything particularly that I was reading or watching at the time of writing. I guess you could say the film Ex-Machina is quite similar thematically.

Dan: The six main characters are all extremely different. Apart from the everyman Dhiraj, there’s the corporate Head of R&D Nita Rhodes, the oil heir Adem Johnson, the gangster Agarkka D’Souza, the black market engineer Salazar Gomez, and Tilda Boulton, a tough detective harbouring a traumatic secret. I have to say my personal favourite is D’Souza. Apart from that, he has some cool little quirks, like his knowledge of an ancient Sri Lankan martial art called Angampora, and fights with a weapon made of several long, thin strips of wood bound tightly. He uses the flat end for slapping, and the bound end for breaking things. And after shedding blood, he has to meditate. He certainly isn’t someone you’d want to meet in real life, but as a character, I thought his development and arc was the most satisfying and, at the end, the most emotional. I also have a very soft spot for Tilda, who essentially started life in the writing process as a plot device, but the revelation of her backstory, which retroactively explains her actions, I hope gives her character a lot of depth and dimension.

DJ: What is the world and setting of Man O’War like?

Dan: There are two main settings: London, and the Niger Delta, in the mid-22nd century. London in the middle of the next century is characterized by the relentless, driving rain propagated by huge feats of engineering called biospheres. It’s a dark, gloomy place, perfect cover for the various forms of skullduggery, be they occurring in the seedy private rooms of the capital’s underground sex trade, or the plush boardrooms where corporate strategy is thrashed out. The Thames is lifeless but perfectly clear, and robots have appeared in virtually every facet of human life, from domestic assistance to sex. As the plot unfolds much of the action moves to Port Harcourt, a city at the tip of the Niger delta, which spreads out from the city like a many tentacle beast, half-swallowed by the Atlantic. And eighty kilometres away from the creeping fingers of the delta there lies Oil City, a huge offshore complex dedicated to the extraction and refinement of oil from the ocean bed. There are no biospheres in Nigeria: where London is sodden, overridden with technology and sterile, the delta bakes under a wild sun and teems with life: crocodiles, snakes, porpoises. But beneath the surface, the societies are not so different in other ways: both are wildly violent, and the political machinations that drive the violence is rarely straightforward.

DJ: What was your favorite part about writing Man O’War?

Dan: Finishing it! But seriously, some of the most satisfying parts are figuring out how to untangle a particularly difficult plot point. Writers have a habit of painting themselves into a corner, and figuring out how to get out of that corner is very pleasing. I spent six weeks thinking about one thorny plot point involving D’Souza, and when I unraveled it, it was so obvious and simple I couldn’t believe I hadn’t seen it already.

Dan: Great question! I have no idea. I’m going to have to give the writerly answer and say that so long as the reader is thinking about something the book talks about, I’m happy!

DJ: Did you have a particular goal when you began writing Man O’War? Was there a particular message or meaning you are hoping to get across when readers finish it? Or is there perhaps a certain theme to the story?

Dan: I don’t like to be too didactic. Bob Dylan once said, upon being asked what his songs were really about, said, “They mean whatever they mean to whoever’s listening to them at the time.” I like that. Having said that, there are certain themes of interest to me, and which certainly surface in the book. One is the way that technologies have a “secondary life”, where they are adopted or adapted in ways that were unexpected by the engineers who designed and manufactured them. I think we’re not really going to see the extent to which robotics have an impact on our lives until they truly make the transition from the lab – or controlled test environment – to wider society.

DJ: When I read, I love to collect quotes – whether it be because they’re funny, foodie, or have a personal meaning to me. Do you have any favorite quotes from Man O’War that you can share with us?

DJ: Now that Man O’War is released, what is next for you?

Dan: I’m working on my next novel Hole In The Sky, a science fiction / fantasy / horror crossover novel. It’s about Grub Teng, a psychitect, a unique individual who is able to create designs for new life forms from the depths of his subconscious. This is a useful skill when all non-human biological life has been eradicated through an event known as the Crash. I’m looking to finish HITS this Spring, and seek publication thereafter. I’m also working on a collection of supernatural novellas set in some of the world’s great cities.

DJ: Before we go, what is that one thing you’d like readers to know about Man O’War that we haven’t talked about yet?

Dan: I hope that, like Black Mirror, readers consider some of the implications of some of the new technologies being researched. Some of them may have the power to fundamentally change the way we see humanity itself. I hope it gives readers reasons to think about these big questions.

Struggling jellyfisherman Dhiraj Om is praying for a good catch to make ends meet. So when a valuable pleasure robot called Naomi is caught in his nets, he senses the opportunity for a quick profit.

But Naomi’s owner, the brutal gangster Agarkka D’Souza, doesn’t take kindly to his property being taken. Dhiraj’s illicit deal thrusts him into a web of corruption stretching from London’s seedy underworld to the Niger Delta. There, oil barons wage bitter war against Marxist dissidents, and Dhiraj and Naomi are hurled into violence. Can Dhiraj save not only himself, but Naomi, who has become not only his protector and his curse, but possibly something more?

A savage, electrifying debut, Man O’War is a taut science-fiction thriller set in a near future where technology, humanity and violence collide.

Away from the page, my day job is with a Government innovation agency. I’ve delivered strategic technology roadmaps for the aerospace, space robotics and cyber security sectors, at both national and international level. All of which comes in rather handy when coming up with new ideas for science fiction stories.

When not working or writing I play five-a-side football with the mighty Üm Louts in east London, and long ago I used to play keyboards and sing for the rock band Sky Empire. Sometimes they still let me write lyrics for them.

I was born in Forest Gate, east London, and now live in Essex with my wife and two daughters.