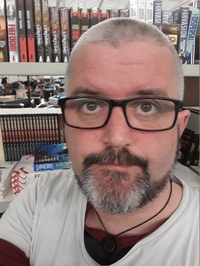 Today I am interviewing David Thomas Moore, editor of the new fantasy anthology, Not So Stories.

DJ: Hi David! Thanks for stopping by to do an interview!

David Thomas Moore: Hi DJ! Thanks for having me.

David: Hello readers! I’m the recently-promoted fiction commissioning editor at Rebellion Publishing (that’s Solaris and Abaddon Books, chiefly). As well as being one of those shadowy, behind-the-scenes editors who decide what gets published, I’m also one of the other type, whose names appear on the front of anthologies (specifically, Two Hundred and Twenty-One Baker Streets, Monstrous Little Creatures and Dracula: Rise of the Beast, inspired by the Sherlock Holmes books, the works of Shakespeare and Bram Stoker’s Dracula, respectively).

DJ: What is Not So Stories about?

David: It’s an anthology of short stories inspired by and responding to Rudyard Kipling’s 1902 children’s classic Just So Stories, written entirely by authors of colour from around the world.

DJ: What were some of the inspirations behind Not So Stories?

David: As you can probably tell from the list above, my anthologies are generally about dusting off and playing with the classics. Just So Stories came up in conversation in the office, and I thought about how important the collection had been to me as a kid, inspiring a fascination with etiological stories that played a large part in my engagement with mythology later in life.

But it’s also, frankly, pretty problematic stuff! Even leaving aside the outright racism found in, say, “How the Leopard Got His Spots” or “The Crab Who Played With the Sea” (and by all means let’s not leave that aside), Kipling’s complacency and imperialism are on show on every page. Inviting writers of colour to interrogate that seemed like the right step.

It also meant keeping myself out of it as much as practical: I’m white, I’m Australian/British, I’m not the person this anthology’s about. I invited Nikesh Shukla – whose The Good Immigrant was one of the standout releases of 2016 – to write a foreword. I provided the platform, but I left it to others to use it.

DJ: What kinds of stories readers should expect in the anthology?

David: All sorts. I say above that this collection “responds to” Just So, and that wording is important. I didn’t direct the writers – didn’t ask them specifically for retellings of the original stories, or sequels, or new etiological tales; I just asked them to respond to Kipling, however they felt right, and they did just that. Some of the stories are sequels or retellings of the originals, some are new etiological tales, and some are neither. Some are about animals and some not, and some are supernatural and some not. Some are political, some are historical, some are personal; some are funny, some are dark, some are painfully raw. It’s very much a mixed bag.

DJ: Being an editor, what do you believe makes a good story?

David: Hah! As Justice Potter Stewart once said of hardcore pornography, the only rigorous definition of a good story is “I know it when I see it.”

I like twists and reveals, except where I like traditional climaxes. I like character-driven stories, except when I like high-concept stuff. Short stories are a field for innovation; it does them no good to pin them to a definition. Personally, I guess, I always want rich, sensory prose, and a palpable impression that the writer cared about the story, was invested in it.

DJ: This may… this will be a difficult question to answer, but what are some of your favorite stories in Not So Stories? I don’t mean what you believe is the best, but perhaps some stories has a particular setting, theme, message, or character that you stood out to you?

David: As well ask me to name a favourite child! (Actually, I only have one, so that’s fairly easy.) Honestly, this anthology ended up delivering to such a high standard I can point out at least one way that every one of the stories is my favourite: “How the Spider Got Her Legs” is the nastiest, “Queen” the rawest, “Best Beloved” the most heartbreaking, “The Man Who Played With the Crab” the most pointed, “Saṃsāra” the most thoughtful, “Serpent, Crocodile, Tiger” the most arch, “How the Tree of Wishes Gained its Carapace of Plastic” the sweetest, “How the Ants Got Their Queen” the neatest, “How the Snake Lost its Spine” the bleakest, “The Cat Who Walked by Herself” the angriest and “Strays Like Us” the most human. “How the Simurgh Won Her Tail” is the most beautiful, “There is Such Thing as a Whizzy-Gang” is the most conscious of the power of stories, and “How the Camel Got Her Paid Time Off” is both the most socialist (fight the power!) and the funniest.

DJ: What was your favorite part about editing Not So Stories?

David: Just what I said above. It was such a consistent anthology; honestly, all killer, no filler. Every now again I looked up from the editing table and just thought, “Damn.” I’m really excited to see what people think of them.

DJ: What do you think readers will be talking about most once they finish this one?

David: The writers, I hope. About how they hadn’t heard of them before – or hadn’t read enough from them – and how they’d like to poach them off me, and give them fantastic paying opportunities elsewhere. (Hit me up; I’ll put you in touch.)

Beyond that, I don’t know. Part of me expects an explosion of angry old white dudes about how Kipling was a “man of his time,” and this is social justice revisionism and whatever. There’s been a sniff of that, but blessedly not much so far.

DJ: When it comes to getting stories for these anthologies, how does that process work? Do you send requests to certain authors, asking them to write a story? Or do you get stories from authors asking for consideration to be included?

David: This was very much by invitation; part of the whole point of the project is that I had a growing list of people of colour I wanted to work with one day, and this was an excuse to reach out to all of them.

DJ: Now that Not So Stories is released, what is next for you?

David: There’s another anthology coming before the year is out (but it’s not yet announced, so no details yet), another five-hander like the Shakespeare and Dracula titles. Reader, it’s beautiful. And there’s my new job, of course, which has hugely increased my commissioning responsibilities; I’ve got a couple titles burning a hole in my Kindle that I’m going to be putting offers in for presently, so hopefully have some announcements for you along those lines in the near future.

DJ: Before we go, what is that one thing you’d like readers to know about No So Stories that we haven’t talked about yet?

David: The art! I should talk about the art. The cover’s by the amazing Joseph Watson (http://www.josephwatsonart.com/); if you like it, look him up for more great stuff like it. As you may or may not know, one of the most distinctive quirks of the original was these little sketches Kipling drew for his own stories, along with these rambling, incoherent footnotes. I felt like I couldn’t do a Just So Stories anthology without acknowledging that, so I commissioned the ever brilliant Woodrow Phoenix (http://www.woodrowphoenix.co.uk/) to whip up accompanying images for seven of the stories, to which the authors added their own Kiplingesque footnotes.

David:  Just to remember to support creators of colour. There’s a great push to get more diverse writers and artists on our shelves – more women, more POC, more queer and disabled artists – but there’s always more to do. Buy diverse creators’ stuff, signal boost them, demand it from publishers – and if you’re a publisher yourself, commission it. There’s so much great talent out there, and it’s going wasted.

David: No, thanks for having me! It’s always a pleasure.

*** Not So Stories is published by Abaddon and is available TODAY!!! *** 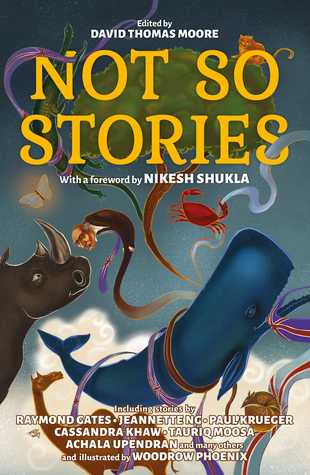 Rudyard Kipling’s Just So Stories was one of the first true children’s books in the English language, a timeless classic that continues to delight readers to this day. Beautiful, evocative and playful, the stories of How the Whale Got His Throat or the First Letter Written paint a magical, primal world.

It’s also deeply rooted in British colonialism. Kipling saw the Empire as a benign, civilising force, and his writing can be troubling to modern readers. Not So Stores attempts to redress the balance, bringing together new and established writers of colour from around the world to take the Just So Stories back, giving voices to cultures that were long deprived them.

A lifelong fan of science fiction and fantasy, an avid roleplayer and LRPer, an enthusiastic if unskilled swordfighter and a passable cook, David Thomas Moore is the author of several short stories and one roleplaying supplement, and the editor of a number of anthologies. He is the Fiction Commissioning Editor at Rebellion Publishing.

Born and raised in Australia, he lives in Reading in the UK with his wife and daughter.