Today I am interviewing Jo Walton, author of the new book, An Informal History of the Hugos.

DJ: Hi Jo! Thanks for agreeing to do this interview!

Jo Walton: I’m a science fiction and fantasy writer, I’ve published thirteen novels with a fourteenth, Lent due out in May 2019. I also write poetry, and very occasional short stories, I had a short story collection out earlier this year from Tachyon Press, called Starlings. This is my second collection of blog posts, the first one was called What Makes This Book So Great and it won the Locus Award for Best Non Fiction in 2015. My novels have also won an embarrassing number of awards – I’m actually embarrassed to list them at this point.

DJ: What is An Informal History of the Hugos about? 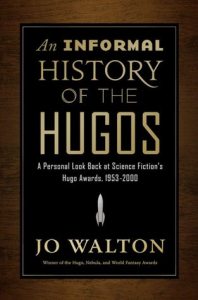 Jo: It’s about the history of the science fiction and fantasy genre in the second half of the twentieth century, as seen through the lens of the Hugo awards. It’s about who was writing what, what was good, what was changing and when, what the field looked like in each of those years. So it’s a survey, with additional essays about some of the books. It started off as a series of blog posts on Tor.com. And it’s very very personal. I make no attempt at objectivity, this is entirely my opinion – except that we took the best of the comments on the original blog posts and put them in the book too, so you’ll see me being wrong and being corrected, and other people’s opinions.

DJ: What were some of your influences for An Informal History of the Hugos?

Jo: I hadn’t thought about this until you asked that, but the only possible answer is “fandom”. This is very much like fannish projects and very unlike academic ones or the lists people compile. Also, and this is the whole point of the project, there’s this huge cultural pressure to say “what is the one best x” and what I’m doing here is resisting that, not saying is the winner the best book, but are the nominees the best five books. So it’s really hard to say anything is a particular influence.

DJ: What was your favorite part about writing An Informal History of the Hugos?

Jo: I originally wrote it as a series of blog posts, and they went up on Sunday mornings, and people would immediately start commenting, and that was my favourite part. The instant feedback, the palpable excitement about books that came out years ago and won, or didn’t win, awards so long ago. There’s a great tendency to look at this year’s books, at the new, surfing the wave. I think this is true of all literature, and it’s certainly true of genre. So having a chance to look back and say “Wow, yes, that was great” or “This one knocked everyone over at the time but it hasn’t held up” and even ‘Oh yes, I remember that! I read that the week I started college” was fun, not just for me but for a lot of people.

Jo: I think they will say “My TBR pile just expanded”. Also, they’ll disagree with me about a bunch of stuff.

Jo: I read this question, and I immediately raise my eyes to the shelf where my Hugo award sits, and I smile. Of course I love it. It’s a fan-voted award that has mostly done a very good job of finding the best five SF anf F books of the year, over a long time, and despite a lot of hazards.

DJ: Could you briefly comment on the evolution of awards, both the winners and nominees?

Jo: Well, to start with it was a bunch of people in a room at the World Science Fiction Convention sticking their hands up to vote for a tiny number of categories, and now it’s a few thousand people all over the world voting on a bunch of categories. It has also become much more international, and more inclusive, as publishing has.

DJ: Are there any changes you would like to see the the Hugos in the future? Different/more/less categories? Changes to the voting/nominating process? Advertising/publicity to the mainstream?

Jo: I’d hate to see that last. Fandom is doing a great job here. We’ve just weathered an attack on the Hugos that tried to game the system and which seems to have given up when they saw that the system was resilient. There were a couple of rough years, but last year and this year we seem to be back to normal.

There are some categories I think are superfluous – for instance the Dramatic Presentation categories. Hollywood doesn’t care about the Hugos, and it cheapens them for us to have an award where the creators don’t even bother to show up a lot of the time. And there may in some years be five worthy nominees, but there’s no tail of worthy nominees. There shouldn’t be a category unless there are a whole lot of things that are worth nominating.

In an ideal world I’d also rationalise the semi-prozine category, because right now it makes no sense, we’d do better to have “best magazine” or just leave it at Best Editor short form.

And we’ll have to see how the new series award works, but it’s not the series award I wanted – I wanted “Best Completed Series” which would encourage people to finish things. You can’t really judge something until you have all of it.

DJ: Did you have a particular goal when you began writing An Informal History of the Hugos? Was there a particular message or meaning you are hoping to get across when readers finish it?

Jo: My goal was to see whether the Hugos were doing a good job. And my answer was yes, most of the time.

DJ: Now that An Informal History of the Hugos is released, what is next for you?

Jo: Lent is coming out from Tor next May, it’s a fantasy novel about Savonarola. I’m just finishing off another novel, which is a fantasy novel about death and subcreation, tentatively entitled No Journey. I also want to write a real history of SF, and a whole bunch of other things. My plan is to live to be ninety-nine and write a book every year.

DJ: Before we go, what is that one thing you’d like readers to know about An Informal History of the Hugos that we haven’t talked about yet?

Jo: What are my qualifications to write this book? Which are, that I read a lot. That’s it. I read a lot, and I think about what I read. In many ways this is a book I wrote as a reader more than as a writer. If anyone has read my Hugo and Nebula award winning novel Among Others they’ll probably already guess I read a lot, as the protagonist of that book does almost nothing but read science fiction and fantasy.

*** An Informal History of th Hugos is published by TOR and is available TODAY!!! ***

The Hugo Awards, named after pioneer science-fiction publisher Hugo Gernsback, and voted on by members of the World Science Fiction Society, have been given out since 1953. They are widely considered the most prestigious award in science fiction.

Between 2010 and 2013, Jo Walton wrote a series of posts for Tor.com, surveying the Hugo finalists and winners from the award’s inception up to the year 2000. Her contention was that each year’s full set of finalists generally tells a meaningful story about the state of science fiction at that time.

Walton’s cheerfully opinionated and vastly well-informed posts provoked valuable conversation among the field’s historians. Now these posts, lightly revised, have been gathered into this book, along with a small selection of the comments posted by SF luminaries such as Rich Horton, Gardner Dozois, and the late David G. Hartwell.

Engaged, passionate, and consistently entertaining, this is a book for the many who enjoyed Walton’s previous collection of writing from Tor.com, the Locus Award-winning What Makes This Book So Great

Jo Walton has published thirteen novels, most recently Necessity. She has also published three poetry collections and an essay collection. She won the John W. Campbell Award for Best New Writer in 2002, the World Fantasy Award for Tooth and Claw in 2004, the Hugo and Nebula awards for Among Others in 2012,  and in 2014 both the Tiptree Award for My Real Children and the Locus Non Fiction award for What Makes This Book So Great. She comes from Wales but lives in Montreal where the food and books are much better. She gets bored easily so she tends to write books that are different from each other. She also reads a lot, enjoys travel, talking about books, and eating great food. She plans to live to be ninety-nine and write a book every year.