DJ: Hi Weston! Thanks for agreeing to do this interview!

Weston: I’m a military veteran with 35 years of service and counting. I’ve written about 30 books and won a few awards. One of my books has been optioned to be a movie starring Dwayne Johnson. I have three Great Danes and am married to the author, Yvonne Navarro. I like Fly Fishing, wine, and exercise. My favorite authors are Donna Tartt, Cormac McCarthy, Ray Bradbury, Peter Straub, Marisha Pessl, Robert McCammon, and John Irving. My favorite book of all time is A Little Life by Hanya Yanagihara.

DJ: What is Burning Sky about?

Weston: At the core it’s about loss of self, it’s about what is real and what isn’t, it’s about what it means to be who we think we are, but I’ve hidden these questions and their answers in a novel about a team of adrenaline junkies who want to change their fortune and become better than they are.

DJ: What were some of your influences for Burning Sky?

Weston: Cormac McCarthy was a huge influence in the book. His continuing theme of man vs nature and man’s inability to overcome nature is the fulcrum in the novel which the plot circles. I especially mined his masterpiece Blood Meridian, using some of the motifs like how he never names any major character but instead uses titles for them. In Burning Sky, the members of the team are never referred to by their names while in Afghanistan. I also loved the way McCarthy landscaped Blood Meridian and tried to use some of the landscape in Burning Sky as a dark mirror to the McCarthy’s terra damnata. I also mined several cultural icons that when seen, can’t help but bring us memories and stir our thinking. Images such as The Falling Man from the Twin Towers during 9/11, or the Burning Monk and the Napalm Girl from black and white photos from Vietnam. Each one of the images is shorthand to something terrible and I used them as interactive touchpoints for readers.

Weston: All of my characters, whether it be from this novel or any of my others, are all broken people. I break them to reflect the realities of life. We are all broken and have to deal with so many issues, sometimes just to get out the door. In the reading of my characters I want their experiences dealing with their own issues to influence the reader. For instance, it’s common for my characters to have varying levels and types of PTSD. I believe in creating real characters that have real problems and who have issues dealing with them.

DJ: What is the world and setting of Burning Sky like?

Weston: Burning Sky takes place in the present and in our reality—mostly. My narrative takes the characters from Afghanistan to Los Angeles, to Phoenix and Tucson, then back to Afghanistan. Having been twice to Afghanistan I felt it was important to use their culture and society as a backdrop from which to share my ideas.

DJ: What was your favorite part about writing Burning Sky?

Weston: Putting my characters in terrible situations and seeing how they get out of them. I plot to a point, but then allow my characters, each with their own distinct personalities, figure out their own ways forward.

Weston: The Falling Man, the Burning Monk, and Napalm Girl and what those images mean to them. The nature of reality and what it means to be an individual.

DJ: Now that Burning Sky is released, what is next for you?

Weston:  I’m presently working on its sequel. While the story in Burning Sky is finished, there is more to tell and a greater mystery to unfold.

Weston: No, thank you for taking the time to ask them

*** Burning Sky is published by Solaris and is available TODAY!!! *** 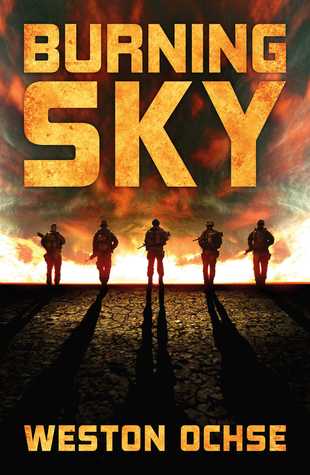 Trained To Kill. Haunted By The Past. Fighting For Their Souls.

Everything is dangerous in Afghanistan, nothing more so than the mission of a Tactical Support Team or T.S.T. All veterans, these men and women spend seasons in hell, to not only try and fix what’s broken in each of them, but also to make enough bank to change their fortunes.

But seven months later, safely back on American soil, they feel like there’s something left undone. They’re meeting people who already know them, remembering things that haven’t happened, hearing words that don’t exist. And they’re all having the same dream… a dream of a sky that won’t stop burning.

A writer of nearly thirty books in multiple genres, his military supernatural series SEAL Team 666 has been optioned to be a movie starring Dwayne Johnson and his military sci fi trilogy, which starts with Grunt Life, has been praised for its PTSD-positive depiction of soldiers at peace and at war.