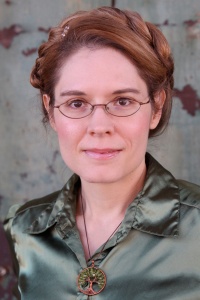 Today I am interviewing Beth Cato, author of the new fantasy alt-history novel Roar of Sky, final book in the Blood of Earth trilogy.

DJ: Hi Beth! Thanks for agreeing to do this interview!

Beth Cato: I’m the Nebula-nominated author of two series out with Harper Voyager, the Clockwork Dagger duology and now the Blood of Earth trilogy. I also have quite a reputation for my baking, especially my cookies. I have a food blog called Bready or Not, and I post new recipes every Wednesday! I’m a California native who has lived near Phoenix, Arizona for over a decade now. I’m a wife, a mom, and usually covered in a rainbow assortment of cat hair.

DJ: What is Roar of Sky and then the Blood of Earth trilogy about? 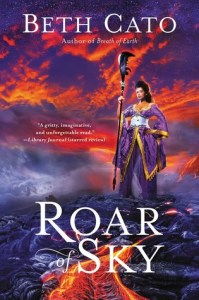 Beth: Roar of Sky is the grand finale. Ingrid has been on the run for her life since the first book, Breath of Earth. She’s a profoundly gifted geomancer in a world where women–and especially women of color–should not have power of any sort. This is a 1906 where world war has started on the Pacific side of the world, with America and Japan allied to take over mainland Asia. Against her will, Ingrid is deeply entangled in the war, and if she’s caught by the military, her incredible magic could be used as a weapon.

DJ: What was the inspiration for the Blood of Earth trilogy?

Beth: When I talk about the start of the series, I like to joke, “Spoiler alert: there’s an earthquake.” That’s because there’s no denying that the 1906 San Francisco Earthquake and Fire was the inspiration for the series, though the disaster happens for very different reasons in my telling! The plot emerged as I strived to explain how geomancy fit into this world.

Beth: Ingrid is my heroine. She’s accustomed to gritting her teeth to get by in a man’s world. She essentially grew up in a geomancer’s auxiliary in San Francisco while keeping secret the fact that she was a far more skilled of a geomancer than any man there. Her arrogance gets her in trouble sometimes, but she has a good heart. She knows what it’s like to be the underdog and she’s not afraid to stand up and do what’s right.

I could talk about the male lead, Cy, but I’ll skip him and go right to everyone’s favorite character, Fenris. Fenris is an agoraphobic, acerbic mechanic who’d rather tweak his machines than deal with people. I like to think that all of my characters are well-rounded and realistic, but Fenris is especially real to me. I think my readers feel the same way.

DJ: What is the setting of the the Blood of Earth trilogy like?

Beth: This is a 1906 with a lot of historical twists–like Theodore Roosevelt is an ambassador for the alliance of America and Japan, not serving as president–but it’s firmly based on actual history. In particular, I go deep into the racism and the gender issues of the time period. Each book has an Author’s Note in the back where I discuss the history of my world versus reality, along with a long bibliography of my source material. My books are entertaining but I also want them to be enlightening.

DJ: Can you tell readers about geomancy?

Beth: Sure! Geomancy is a rare skill that really drives the economy and technology of this world. When the earth shakes, it releases energy. Geomancers suck that in like a sponge. If it’s a bad quake, the energy overload will make their fever skyrocket and kill them within a minutes. To survive, they need to break contact with the ground–or have in their possession a special crystal called kermanite. A geomancer acts as a conduit between the earth and kermanite, filling the crystals with energy that can then be used as a battery in cars, tanks, flashlights, and airships of all sizes. Ingrid, of course, being my heroine, can channel energy, and do so much more.

DJ: How have the reviews been from readers, bloggers, and reviewers for the first two books of the Blood of Earth trilogy? Is there anything that your audience seems to be particularly enjoying or is eager to find out more about?

Beth: A lot of people have loved the books. I get many comments from readers who are stunned by the actual history they learn and how the worldbuilding is done, but the number one thing that people love is Fenris. Folks will be happy to know that Fenris plays a big role in Roar of Sky.

DJ: What was your favorite part about writing Roar of Sky?

Beth: The book starts out in Hawaii, so I had to take a research trip there. Yeah, I know, what a huge burden! It involved a lot of research prep through historical sources so that when I arrived on the ground, I could scout out specific places. I didn’t bring a swimsuit. This wasn’t a vacation. I was up at 5am most days to hike on volcanoes. I’d love to return and take a more leisurely approach to the islands.

Beth: I hope they are left with a deep sense of satisfaction. When you’re with characters through a series, it’s an investment not just of time but of emotion.

DJ: Did you have a goal when you began writing the Blood of Earth series? Was there a particular message or meaning you are hoping to get across when readers finish it? Or is there perhaps a certain theme to the story?

Beth: Until Roar of Sky, I didn’t realize that most of my characters are on some kind of path of redemption. For Ingrid, that’s pretty complicated because she has to cope with her family legacy and her own dark potential. For Cy, he was the brilliant engineer behind one of the great war machines of the past decade. Some important characters from early on, like the much-hated Captain Sutcliff, make a return, having changed immensely due to their time with Ingrid.

Beth: When I wrote Breath of Earth, my only hope was to make that book good enough to sell. I had a very loose idea of the plot beyond that point. When the book did sell, I had a two book deal. I started on Call of Fire and soon realized, well, darn, there is no way I can resolve this arc in two books. I need a third. Fortunately, my sales on Breath were good enough that they signed me for the third book. That gave me the space I needed to bring things to a dramatic climax and do justice to my characters.

DJ: When I read, I love to collect quotes – whether it be because they’re funny, foodie, or have a personal meaning to me. Do you have any favorite quotes from Roar of Sky that you can share with us?

DJ: Now that Roar of Sky is released, what is next for you?

Beth:  I’m working on a new book I’m pretty excited about. We’ll see what happens from here! In the meantime, people can follow me on social media or subscribe to my newsletter for the latest news, which always includes cookie recipes.

Beth: And thank you!

*** Roar of Sky is published by Harper Voyager and is available TODAY!!! *** 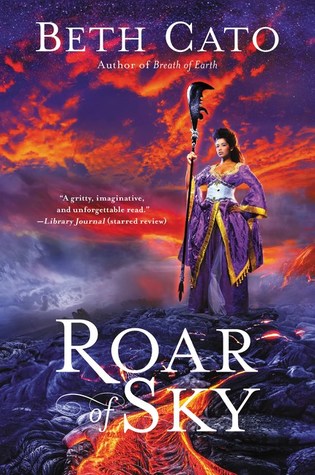 In this stunning conclusion to the acclaimed Blood of Earth trilogy—a thrilling alternate history laced with earth magic, fantastic creatures, and steampunk elements—the young geomancer Ingrid must find a way to use her extraordinary abilities to save her world from the woman hell-bent on engineering a war that would rip it to pieces.

Thanks to her geomantic magic, Ingrid has successfully eluded Ambassador Blum, the evil genius behind the plan to achieve world domination for the United Pacific. But using her powers has taken its toll: Ingrid’s body has been left severely weakened, and once again she is on the run with her friends Cy and Fenris.

Hoping to learn more about her magical roots and the strength her bloodline carries, Ingrid makes her way across the Pacific to Hawaii, home to the ancient earth goddess Madame Pele. What she discovers in this paradise is not at all what she expects—but perhaps exactly what she needs to find the strength to face Blum.

But Ambassador Blum comes from the same world of old magic. She is a kitsune with near-mythic power. And if Ingrid cannot defeat her once and for all, she knows Blum will use that power to take the lives of everyone she holds dear before igniting a war that will bring the entire world to its knees.

Beth Cato hails from Hanford, California, but currently writes and bakes cookies in a lair west of Phoenix, Arizona. She shares the household with a hockey-loving husband, a numbers-obsessed son, and three feline overlords.

She’s the author of THE CLOCKWORK DAGGER (a 2015 Locus Award finalist for First Novel) and THE CLOCKWORK CROWN (an RT Reviewers’ Choice Finalist) from Harper Voyager. Her novella WINGS OF SORROW AND BONE was a 2016 Nebula nominee. Her new alt-history steampunk series began with BREATH OF EARTH and continues with CALL OF FIRE and ROAR OF SKY (out October 23rd, 2018).