Today I am interviewing Paul Meloy, author of the new fantasy novel, The Adornments of the Storm, second book in the Night Clock series.

DJ: Hi Paul! Thanks for agreeing to do this interview!

Paul: Thank you for inviting me to do the interview, DJ.

I live in Devon with my family and I work full time as a senior mental health nurse in a community team in Torquay. This takes up much of my time and energy, but when I get the chance, I write short stories, novellas and novels, and am delighted to say I’ve had some small success and met some wonderful people in the process.

DJ: What is The Adornments of the Storm and then the Night Clock series about?

Paul: A long time ago, it seems, I started writing short stories that began to develop a theme, or themes, that demanded exploration. It was an almost subconscious process, at least at first, and characters seemed to want to communicate with each other and inhabit the same world.  Eventually I realised I’d have to attempt a novel just to try and subdue the clamour from all these characters and make sense of their inter-tangled stories. Night Clock came out of that but I knew, finishing it, that there was more going on, and Adornments of the Storm was my attempt to round it all off. I intended the whole structure of the books and stories to be fairly loose, enabling the reader to dip in and out at any point and still be able to – hopefully- make sense of it. If you put all the stories together and the novels, each reader might get a unique reading experience.

DJ: What were some of your influences for the Night Clock series?

Paul: I always loved the stories of Harlan Ellison and Ray Bradbury when I was growing up. I admired Ellison’s courage with form and challenging accepted norms in story writing, also his fearlessness addressing difficult, often taboo, subjects. I loved Bradbury’s use of language, warmth and pure display of storytelling. He didn’t get bogged down (and neither did Ellison) with the hard science behind his fiction, he just told the story and developed his ideas. That’s my approach. I’m no scientist. A rocket’s a rocket and a robot’s a robot. In my case, a Gantry’s a Gantry and a Railgrinder’s a Railgrinder.

Paul: I have a lot of main characters, all with their own individual backstories told in short stories and novellas across the years. They are all struggling with hurt, loss, bereavement, finding hope and exploring trust and friendship as they all come together. At first they’re unaware of the vast powers they have but as they find each other and start to engage, they begin to connect and help each other discover their potential. This is true not only of the supernatural characters but also the very human ones, too.

DJ: What is the world and setting of the the Night Clock series like?

Paul: The setting is limitless, really. Parts of it are very much rooted in the real world, with all its mundane grind and despair, some of it set in the dream world of the Quays, where Dark Time can be inexhaustibly used to manipulate dreams for both good and bad. These realms are both linked by the Gantries that allow travel between them. I get to explore these and their concepts, including the boundless spaces, or Compartments, where Dark Time is generated between worlds, more fully in Adornments, which I enjoyed immensely. There’s a millennia-old war going on between creatures called Firmament Surgeons and Autoscopes for control of Dark Time. The war has destroyed or degraded most of the Quays and infiltrated the real world causing despair and hopelessness to take over the human race.

DJ: How have the reviews been from readers, bloggers, and reviewers for the first book of the Night Clock series? Is there anything that your audience seems to be particularly enjoying or is eager to find out more about?

Paul: I’d say mostly positive, or at least constructive. Some lovely reviews, actually, really pleasing. Some stinkers, but you can’t please everyone, especially with very weird fiction like these books.  If anything stands out, readers seem to pick up on the warmth between the characters, and the emotional impact of the book.

DJ: What was your favorite part about writing The Adornments of the Storm?

Paul: The kinds of feedback I enjoy most is that people laughed out loud in places, or were moved emotionally, and I think they will find these elements in Adornments.

DJ: Did you have a goal when you began writing the Night Clock series? The series is not yet complete, but is there a particular message or meaning you are hoping to get across when readers finish it? Or is there perhaps a certain theme to the story?

Paul: While The Night Clock had male friendship at its core and crisis in male identity, Adornments of The Storm is a more complex work, though it stands as a companion volume. The novel explores mental illness and how it affects people – and hopefully there’s an understanding and heart to this work. And the book’s explorations of faith and what love mean are explored, too. I would like the reader to get hope from the stories, and the overcoming – or resistance to – despair.

DJ: When I read, I love to collect quotes – whether it be because they’re funny, foodie, or have a personal meaning to me. Do you have any favorite quotes from The Adornments of the Storm that you can share with us?

Trevena never went back, never went home again. There were too many memories there, good ones he was better off keeping in his head, and some bad ones safely boxed away and repressed, too many people still around with no ambition or drive, drinking in the same pubs and shopping down the same aisles. Trevena shuddered. Sometimes the ghosts that haunted you most were the ones that were still alive.

DJ: Now that The Adornments of the Storm is released, what is next for you?

Paul: I have another collection of short stories coming out next year, but I haven’t had permission to announce that in detail yet, so that’s all I can say about that – I am very pleased with it though. I have a story called The Gearbox in an anthology edited by Darren Speegle coming out later this year. The antho is called Prisms and it’ll be published by PS Publishing. It looks great, wonderful contributors whom I’m humbled to be counted amongst.

Paul: I am notoriously lazy when it comes to self-promotion. I have Facebook, that’s about all. I have resisted the whole website thing – I just know I’d neglect it and it would wither and die like most of my plants.

Maybe it’s time I considered one…

DJ: Before we go, what is that one thing you’d like readers to know about The Adornments of the Storm and the Night Clock series that we haven’t talked about yet?

Paul: I’d like to mention the cover artist of both books, Ben Baldwin. I am so lucky to have had Ben illustrate my books and stories in the past. He is a friend, and he just seems to get inside my head and see it as I do. It’s a remarkable feeling. He has a new book coming out, called Refractions – a beautiful book of original artwork – and I was honoured that Ben asked me to write the introduction for it. Check him out, you won’t be disappointed.

*** The Adornments of the Storm is published by Solaris and is available TODAY!!! *** 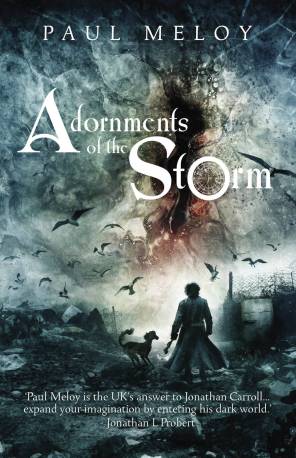 The Night Clock is Running Down.

It has been seven years since the devil-in-dreams was banished to the mysterious Quays. But the Autoscopes are gathering once again, firing their unholy devices and priming the Toyceivers for war.

Mental health nurse Phil Trevana has almost forgotten the strange events of his training. But time means nothing to those who walk in dreams; and when Phil encounters the enigmatic Andrew Chapel, he realises that something is badly wrong.

Paul Meloy was born in 1966 in South London. He
is the author of Islington Crocodiles, Dogs With
Their Eyes Shut, The Night Clock, and Electric
Breakfast. His work has been published in Black
Static, Interzone and a variety of award-winning
anthologies including Creatures: The Legacy of
Frankenstein