Today I am interviewing Don Lubov, author of the new science-fiction novel, The Plague.

DJ: Hi Don! Thanks for agreeing to do this interview!

What is The Plague about?

Don: “The Plague” is a cautionary tale, about how anger can be dangerous to us all.

DJ: What were some of your influences for The Plague? 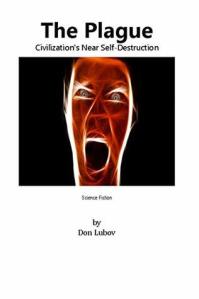 Don: Seeing anger on an individual destroy its container, and on a large scale, destroy countries. As Mark Twain said: “Anger is an acid that can do more harm to the vessel in which it is stored than to anything on which it is poured.”

Don: My main character, Dave Miller, is an investigative reporter. He is obsessed with his attire, frightened of heights, claustrophobic, and insecure in his ability to excel as a reporter.

Don: On page 37, an overdressed shopper argues with a “servicebot”.

DJ: What is the world and setting of The Plague like?

Don: The story begins in 2040, when “servicebots” have been safely and efficiently introduced into society. Technology is advanced, but we, as a species, have not kept pace with our technology.

DJ: What was your favorite part about writing The Plague?

Don: How the world changes when anger is removed.

Don: Anger, and its effect on society.

DJ: Did you have a particular goal when you began writing The Plague? Was there a particular message or meaning you are hoping to get across when readers finish it? Or is there perhaps a certain theme to the story?

Don: We, as a species, must evolve, as our technology evolves, or it will run away from us.

DJ: When I read, I love to collect quotes – whether it be because they’re funny, foodie, or have a personal meaning to me. Do you have any favorite quotes from The Plague that you can share with us?

DJ: Now that The Plague is released, what is next for you?

Don: I have 5 more books to promote.

DJ: Before we go, what is that one thing you’d like readers to know about The Plague that we haven’t talked about yet?

Don: It is a cautionary tale. We must become as humanly advanced as our technology, or we run the risk of becoming extinct.

Don: We must stop teaching anger, in all its manifestations, to our young.

The year is 2040. Robots have been safely and efficiently introduced into society. They are an integral part of our world, when a pandemic of global proportions arrives.

Isolated deaths keep cropping up. Seeming random at first, a pattern begins to emerge. Dave Miller, an investigative reporter, pounces on the story.

He explores his neighborhood and city, and finds death at every turn. His investigation leads to interviews with experts in various fields. Everyone is mystified. People are panicky. The deaths go global. The world is in chaos.

Through his investigations, Dave learns that a most unusual plague is responsible. It is swift and thorough—Three billion people die in six weeks. The immediate questions are: What is causing this epidemic? Why does it affect some of us and not all of us?

Don has been happily married since 1976. He was an artist (drawing, painting, sculpture, and architecture) for 34 years and exhibited his artwork at 3 New York City Art Galleries and the Heckscher Art Museum. He taught art and/or design at several universities, including Stanford University. He has written about spirituality and stress relief since 1971, when he experienced a spiritual awakening.

Don is the author of 9 books. He has written for Yahoo Voices, Beliefnet.com, and Kinja.com. His writings have been published in various magazines and books. He has successfully taught his “Six-Step Path” to inner peace to 2,000 people. One of his designs was accepted and juried in The World Trade Center Memorial Competition. He has taught his “Six-Step Path” for stress reduction for the past 12 years, at Del Webb and 3 local colleges.

See his website: donlubov.com. He taught art on the university level for eight years. From 1971-1975 he backpacked, alone, 4,500 miles across the U.S., lived in communes, had adventures (here and in Mexico), and gathered notes for his memoir: “Near Death in the Gila National Forest”. 6 of his most recent books can be found on Amazon, and on his website: donlubov.com. He belongs to Writers Bloc of Summerfield, FL.