DJ: Hi Tim! Thanks for agreeing to do this interview!

Tim: I’m a writer of SF and weird fiction, and I live in York in the UK with my wife and two young sons. My previous books include Machineries of Mercy, You Don’t Belong Here, and a non-fiction book about Les Vampires, an amazing silent film from 1915. My short stories have appeared in lots of places, and have been selected for Best of British Science Fiction and The Best Horror of the Year. By day I’m a freelance editor, and I’m also co-editor of the British Fantasy Society fiction journal, BFS Horizons.

DJ: What is Snakeskins about?

Tim: It’s about a group of British people whose bodies rejuvenate every seven years, and in the process they produce a sentient clone known as a Snakeskin. The trouble is, the Snakeskin lives on for a while – maybe a few minutes, maybe a few days… The novel’s about what it might feel like, coming face to face with an exact copy of yourself – and it’s also about what the effect of society might be if only some people had this peculiar power.

DJ: What were some of your influences for Snakeskins?

Tim: The central idea is based on a real fact – after seven years, every cell in the human body will have been replaced. I liked the idea of that process happening not gradually, but all in a single moment. And then that idea got all mixed up with the concept of snakes shedding their skins, obviously. In terms of fiction, Snakeskins was influenced in its structure and scope by the TV series I was binging at the time. Humans was in the mix, certainly, but an even bigger influence was Deutschland 83, a terrific political thriller about an East German spy undercover in West Berlin. There’s no SF element to it, but the pacing and set-pieces influenced the novel a lot.

John Wyndham’s novels are perennial influences on my books, and the concept of the Fall is a direct homage to the meteor shower in The Day of the Triffids, the novel that introduced me to adult SF when I was around ten years old.

Tim: Yikes. I’m not certain the author is the best person to ask! There are three viewpoint characters in the novel: Caitlin Hext, a teenager about to experience her first shedding ceremony; Gerry Chafik, a journalist fixated on Charmers and Snakeskins, and Russell Handler, a low-ranking government aide who begins to uncover a conspiracy. I like all three of them very much – I mean, of course I do! – but they’re all terribly flawed characters too. I guess I find it easier to sympathize with characters that are mixed up or that are prone to making mistakes – in other words, characters that feel human. Caitlin’s the easiest to root for, as she’s a principled teen, increasingly confident in her identity and her opinions – she’s pretty direct and being so forthright gets her into plenty of trouble – and if the story belongs to anyone, it’s her. I love Gerry’s dry sense of humour and her dogged refusal to give up the chase. At the start of the novel, Russell is pretty weak-willed and subservient, but perhaps he learns more about himself than anyone.

Tim: There are lots of twists and turns in the novel, so I’m wary of naming someone who seems unimportant at first, but who turns out to be vital… But there’s a slightly scatty female character who I like very much, who has a brief but important role. One of the Titan Books marketing team mentioned this same character and suggested a spin-off novel all about her! (I think she was joking.) Oh, and Caitlin’s father, Ian. He’s ace.

DJ: What is the world and setting of Snakeskins like?

Tim: It’s contemporary Britain, but in a parallel world in which a meteor strike a century ago granted strange powers to a small group of people and their descendants. This event has had a number of knock-on effects, with the perhaps unexpected result that Britain is now running about 20 to 30 years behind our world in terms of technology etc… and the country is entirely isolated from the outside world. The Great British Prosperity Party has governed the country for several generations and a chasm has opened up between the haves and have-nots. It’s not quite a dystopia, but it’s certainly not a good look for the country. I started writing the book before the double-whammy of Trump and the EU referendum that kicked off the Brexit process, but that type of politics certainly fed into the worldbuilding in later drafts.

DJ: What was your favorite part about writing Snakeskins?

Tim: Good question! The dialogue, I think. Obviously enjoying writing dialogue is dependent on enjoying spending time with the characters… but I’ve always loved down-to-earth domesticity mixed with high-concept SF plots, and I think that Snakeskins represents the point where I’ve nailed down my preferred tone.

Tim: I’m writing these answers five days before the novel is published… you can imagine how anxious I’m feeling! To be honest, I’d be happy if readers are talking about the novel at all once they finish it. No, scratch that. I’ll be happy if there are readers, period! Seriously, though, Snakeskins is designed as a twisty-turny thriller, and I hope the plot will prove satisfying. But I suppose also I hope that a couple of the set-pieces will lodge in readers’ minds. It’s been a while since I read the novel myself (during the copyedit, that is) and now particular scenes stand out in my memory: the two Hext family sheddings, plus a couple of spoilery ones from later in the book. If other readers have a similar experience, I’ll be delighted.

DJ: Did you have a particular goal when you began writing Snakeskins? Was there a particular message or meaning you are hoping to get across when readers finish it? Or is there perhaps a certain theme to the story?

Tim: Absolutely. It isn’t a horror novel, but the main concept plays on a particular fear of mine, one I’ve explored in different ways in my other stories and books: What if somebody else could do a better job of living my life than me? Part of that’s not at all literal – what if I’m not exploiting all my privileges and opportunities in life, and so on… like most people, I constantly feel I’m not being efficient or appreciating life as much as I should. But I’ve always been fascinated with stories about doppelgängers and doubles, so there’s also that aspect, this fear of somebody literally being a more effective version of oneself.

DJ: Now that Snakeskins is released, what is next for you?

Tim: The next book to be released is my first short story collection, And the House Lights Dim, which will be published in July this year. I’m putting the final touches to an SF novella, a detective story set on Mars. Last month I delivered the manuscript of my second novel for Titan Books, which will be published in May next year. It’s called Hope Island, and it features a remote island, creepy children, a cavern filled with ethereal song, and dead bodies. Lots of dead bodies.

Tim: Thanks so much for inviting me, and for such terrific questions!

***Snakeskins is published by Titan Books and is available TODAY!!!*** 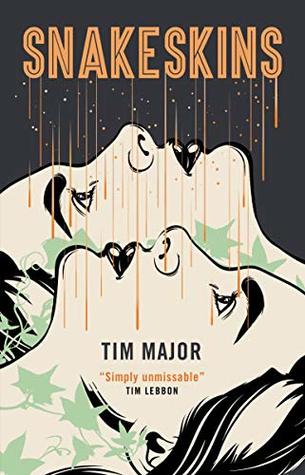 An SF thriller examining the repercussions of rejuvenation and cloning on individuals’ sense of identity and on wider society.

Caitlin Hext’s first shedding ceremony is imminent, but she’s far from prepared to produce a Snakeskin clone. When her Skin fails to turn to dust as expected, she must decide whether she wishes the newcomer alive or dead.

Worse still, it transpires that the Hext family may be of central importance to the survival of Charmers, a group of people with the inexplicable power to produce duplicates every seven years and, in the process, rejuvenate. In parallel with reporter Gerry Chafik and government aide Russell Handler, Caitlin must prevent the Great British Prosperity Party from establishing a corrupt new world order.

Snakeskins is an SF thriller examining the repercussions of rejuvenation and cloning on individuals’ sense of identity and on wider society, with the tone of classic John Wyndham stories and the multi-strand storytelling style of modern TV series such as Channel 4’s Humans.

Tim Major’s SF thriller SNAKESKINS is published by Titan Books and his first short story collection, AND THE HOUSE LIGHTS DIM, will follow in July 2019. His previous books include MACHINERIES OF MERCY, YOU DON’T BELONG HERE and a non-fiction book about the silent crime film, LES VAMPIRES.

Tim’s short stories have appeared in numerous publications including Interzone, Best of British Science Fiction and Best Horror of the Year.