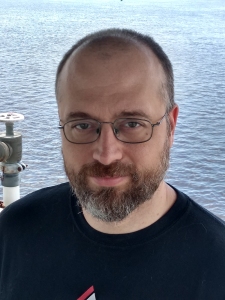 Today I am interviewing J.T. Nicholas, author of the new science-fiction novel, Re-Coil.

DJ: Hi J.T.! Thanks for agreeing to do this interview!

J.T. Nicholas: I’m a sci-fi author (primarily, anyway) who lives in North Carolina.  I’ve wanted to be an author for pretty much as long as I can remember, but it’s a long journey, so I spent a large chunk of my career in the exciting and dazzling world of insurance data analysis.  I know, I know… it’s difficult to imagine leaving something so exciting behind for a career as mundane as authordom, but such is the road I’ve taken. I’m happily married with two Australian Shepherds who have a bigger social media following than I do (@ronin_and_gambit on Instagram) one of which is whining at me right this very moment.  I love reading (unsurprising), writing (also unsurprising), games (video and tabletop) and anime.

DJ: What is Re-Coil about? 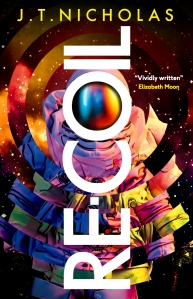 J.T.: I think of it as a whodunnit set against the backdrop of a gritty cyberpunk/sci-fi world where mankind has conquered death by backing up the human consciousness and stuffing it into a new body (or coil in the parlance of the book) when you die.  The main focus of the story has the protagonist trying to figure out why he and his crew disappeared on what should have been a routine salvage mission. There’s corporate greed, coverups, and a dash of existential threat thrown in for good measure.

DJ: What were some of your influences for Re-Coil?

J.T.:  L.E. Modesitt, Jr.’s sci-fi has always had an ethical twist to it, which certainly has influenced my writing.  All of the cyberpunk regular suspects (Bruce Sterling, Neal Stephenson, Richard K. Morgan, Katsuhiro Otomo) influenced my vision of the future.  Isaac Asminov and Phillip K. Dick were also big influences, particularly since I think the two of them were some of the biggest voices in the “detective sci-fi” world.  I’ve been reading sci-fi, fantasy, and mystery for 3 decades, so there are a lot of other influences. And that’s just the books. I also draw influence from movies, tv shows, anime, video games, and people watching.

J.T.: I think of Carter (the main character) as a sort of everyman.  He’s a guy who is trying to make his way in the world and live life on his own terms.  He doesn’t want to get caught up in drama and intrigue, and when it comes along, he’s determined to do what he has to do to survive it and get back to his normal existence. I think we can all empathize with that mindset.

J.T.: There’s a solicitor that’s very loosely based on a friend of mine.  Only in the book for a few lines, but it was kind of cool to be able to sneak a sort of homage to a real-world person into the novel.  Names changed to protect the innocent and all that, but I’d say that would be my favorite “not important” character.

DJ: What is the world and setting of Re-Coil like?

J.T.: Recoil is set in a future version of our world.  Conquering death has led to overpopulation and humanity has expanded into the solar system.  Faster-than-light travel hasn’t been discovered (though near-lightspeed travel is possible) so humanity is stuck with Earth, Mars, Luna, a variety of moons, and large space habitats.  It’s crowded and dirty and everyone is trying their level best to keep their insurance premiums (to ensure prompt re-coiling in the event of death) up to date. Numerous polities exist, with many colonies and habitats operating as sort of de facto city-states.  The corporations are “international” and end up controlling more absolute power than the governments. So, you know, not terribly different from our world. 😛

DJ: What was your favorite part about writing Re-Coil?

J.T.: The fight scenes.  I mean, that’s pretty much true of anything I set out to write.  Action scenes are fun and tend to flow a lot faster for me than the non-action scenes.

J.T.: Hmm… that’s a tough one.  I’d like for them to be talking about the idea of immortality through technology and what that might do to a society.  I suspect that the focus might be more around gender and sexual identity though, just as a byproduct of current events.  I didn’t really set out to write a book about identity in that sense, but with the ability to be put in bodies different from your original “birth-issued” equipment, it was sort of an inevitable side-effect.

DJ: Did you have a particular goal when you began writing Re-Coil? Was there a particular message or meaning you are hoping to get across when readers finish it? Or is there perhaps a certain theme to the story?

J.T.:  In the most general sense, I like thinking about how technological changes will impact social norms.  Just think about how much the internet and the cell phone have changed how society works, and both of those are relatively minor things.  Major impact, of course, but extrapolations from existing tech. What impact would immortality have on us?

DJ: When I read, I love to collect quotes – whether it be because they’re funny, foodie, or have a personal meaning to me. Do you have any favorite quotes from Re-Coil that you can share with us?

J.T.: So, all cards on the table here.  I don’t have any that I can remember off the top of my head.  I could probably go back and find cool stuff, but it’s much more fun to see readers post their favorite quotes and go, “Oh, wait… did I write that?  That’s pretty good!” My personal favorite thing that appears on the book is the blurb that L.E. Modesitt Jr. gave me, because he’s one of my all-time favorite writers.  But I don’t think that counts. 🙂

DJ: Now that Re-Coil is released, what is next for you?

J.T.:  I’m under contract for another sci-fi novel with Titan.  Not sure I can share any details yet, except to say that it is another sci-fi work and it is not set in the same world as Re-Coil.  It may or may not involve a ragtag starship crew up to some questionable shenanigans.

DJ: Before we go, what is that one thing you’d like readers to know about Re-Coil that we haven’t talked about yet?

J.T.: At its core, it is an action/adventure/mystery story.  There are politics and ethics and issues, but at the end of the day, I wanted to write something entertaining.  That’s far more important to me than writing something super high concept but boring.

J.T.: Thanks for having me!

***Re-Coil is published by Titan Books and is available TODAY!!!***

The Expanse meets Altered Carbon in this breakneck science fiction thriller where immortality is theoretically achievable, yet identity, gender and selfhood are very much in jeopardy…

Carter Langston is murdered whilst salvaging a derelict vessel–a major inconvenience as he’s downloaded into a brand-new body on the space station where he backed up, several weeks’ journey away. But events quickly slip out of control when an assassin breaks into the medbay and tries to finish the job.

Death no longer holds sway over a humanity that has spread across the solar system: consciousness can be placed in a new body, or coil, straight after death, giving people the potential for immortality. Yet Carter’s backups–supposedly secure–have been damaged, his crew are missing, and everything points back to the derelict that should have been a simple salvage mission.

With enemies in hot pursuit, Carter tracks down his last crewmate–re-coiled after death into a body she cannot stand–to delve deeper into a mystery that threatens humanity and identity as they have come to know it.

J.T. Nicholas is the author of the upcoming science fiction novel ReCoil (February 2020 from Titan Books) and the neo-noire science fiction series, The New Lyons Sequence (available now from Rebel Base Books).

J.T. was born in Lexington, Virginia, though within six months he moved (or was moved, rather) to Stuttgart, Germany.  Thus began the long journey of the military brat, hopping from state to state and country to country until, at present, he has accumulated nearly thirty relocations.  This experience taught him that, regardless of where one found oneself, people were largely the same.

When not writing, J.T. spends his time practicing a variety of martial arts, playing games (video, tabletop, and otherwise), and reading everything he can get his hands on.

J.T. currently resides in Wilmington, North Carolina with his wife, a pair of indifferent cats, and two Australian Shepherd puppies intent on destroying anything and everything that fits in their mouths.