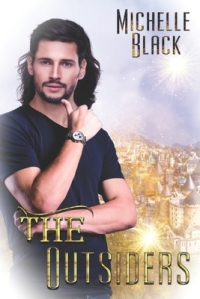 Today I am interviewing Michelle Black, author of the new fantasy romance novel, The Outsiders.

DJ: Hi Michelle! Thanks for agreeing to do this interview!

Michelle Black: Hello. I’m a doctor and baker who really enjoys reading and writing. I’ll admit I end up reading more manga and light novels than actual books these days, but it keeps me happy.

DJ: What is The Outsiders about?

Michelle: It’s a fantasy romance novel that follows Ray Telor, an attorney from London who wishes for a break from his everyday life. It leads him to a village named Aesil, where he meets the hated Gale, a healer shunned by the other villagers. Aesil is a land lost in time, just like its inhabitants. Ray falls for the quiet, but gentle Gale, and learns of his gift to heal with his hands, and why the other villagers hate him. Gale’s gift allows him to stop death by bringing about death.

Drawn into the village life and Gale, Ray embarks on a journey of discovery and adventure, to find missing children and men, to search for the other extraordinary inhabitants of the mystical land, and an unfortunate battle against a man-eating demon.

DJ: What were some of your influences for The Outsiders?

Michelle: There weren’t any influences really. The Outsiders was supposed to be a short story about a healer, but it turned into what it is now. I can’t explain how that happened.

Michelle: Ray for me is someone who finds it difficult to express his emotions or commit fully to relationships. He’s headstrong but cautious, and appreciates genuine people. He’s had difficulty coping with his father’s death, and because of their differences he spends the book not knowing if it’s okay for him to feel something towards his father. I hope people can appreciate his personality.

Gale is a pure bundle of honesty and gentleness. He’s had a hard life up until he met Ray, and his kindness without hatred is the hallmark of his character and strength.

Michelle: My favourite non-POV character would be Cole. I had the most fun writing every one of his scenes. If he existed in real life, he would definitely be someone I’d love to meet and befriend.

DJ: What is the world and setting of The Outsiders like?

Michelle: The Outsiders takes place both in our world, in London, where Ray is from, and in an alternate world, where the Land of Morhe exists. The village Ray goes to is called Aesil, a village which is in Morhe. Time passes more slowly here, and it is a land governed by different gods, who bestow onto their people their gifts. Aesil is the only village not governed by a god. The people of Morhe do not have technology like the modern world, but instead have abilities that allow them to do wondrous things.

Each village and peoples are governed by a ruler, one appointed by the people. They are mostly peaceful, except due to the main war brought about the man-eating demon.

The peoples governed by a god worship their respective gods.

DJ: What was your favorite part about writing The Outsiders?

Michelle: Honestly, finishing it. I wrote it back when I was in medical school and it was really difficult sticking with it to follow through before exams. Reaching that end point has a special place in my heart.

Michelle: The end. I revealed things at the end which I thought was pretty interesting!

DJ: Did you have a particular goal when you began writing The Outsiders? Was there a particular message or meaning you are hoping to get across when readers finish it? Or is there perhaps a certain theme to the story?

Michelle: I didn’t. I just wished there were more people like Gale. He may appear to be a pushover, but he wasn’t, and I loved his kindness.

DJ: When I read, I love to collect quotes – whether it be because they’re funny, foodie, or have a personal meaning to me. Do you have any favorite quotes from The Outsiders that you can share with us?

Michelle: I had a few, some food and coffee related, but I really liked this one.

“You defeated a demon,” said Gale, kissing his chest. “I’m sure you can defeat anything else.”

DJ: Now that The Outsiders is released, what is next for you?

DJ: Is there anything else you would like to add?

Michelle:  Thank you so much for having me!

DJ: My pleasure! Thank you so much for taking time out of your day to answer my questions!

***The Outsiders is published by Extasy Books and is available TODAY!!!*** 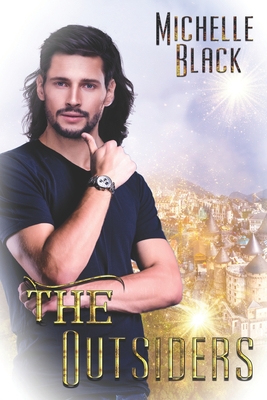 London attorney runs away from his everyday life to a land lost in time, where he finds love and adventure with the land’s fantastical inhabitants.

When events occur that force London attorney Ray Telor to take a vacation, he heads to a faraway village he’d never heard of before. Aesil is peaceful, lovely, and a world lost in time. Ray is instantly charmed, but there’s a reason so few know of it.

He’s assigned to stay with the village outcast and healer, shy and beautiful Gale, who everyone in the village shuns. Ray cannot understand why until he discovers Gale could heal someone with his hands, but every time he does, death follows.

Enamored with the kind healer, Ray grows closer to Gale, but trouble brews when two children go missing and then two men. Ray finds himself on an unlikely adventure to uncover the secrets of the village of Aesil, the lands hidden beyond it, and becomes thrown into the conflict between its extraordinary inhabitants and a man-eating demon.

Michelle Black is a doctor and baker who enjoys writing in her free time. She enjoys gathering inspiration from novels, light novels, manga, and various dramas. Gale and Ray is her first manuscript.