DJ: Hi Timothy! Thanks for agreeing to do this interview!

Timothy: I’ve been writing full-time for the past forty years, with 58 novels and over a hundred short stories published. I’m best known for my 13 Star Wars books (beginning in 1991 with Heir to the Empire), but have several other series to my name, including the Cobra, Dragonback, and Quadrail series and the Blackcollar and Conquerors trilogies.

DJ: What is Queen and then The Sibyl’s War trilogy about? 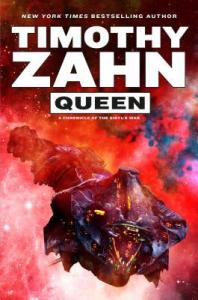 Timothy: A young woman, Nicole Hammond is snatched from the streets of Philadelphia and taken aboard a giant spaceship, the Fyrantha, to help with the (mostly human) crews that are repairing it. Nicole is a “Sibyl,” which means that with the aid of a special inhaler she can telepathically hear the ship tell her crew what needs to be repaired. One day, she happens upon a large terraformed chamber and two groups of different aliens, intent on killing each other. Against her better judgment she begins to investigate the Fyrantha’s secrets.

DJ: What were some of your influences for The Sibyl’s War trilogy?

Timothy: Nothing in particular, though I read a lot of SF in my youth and so there are undoubtedly a lot of subconscious influences from those books and authors. Mostly it was to be a combination of puzzle-box, space opera, and redemption arc.

Timothy: Before Nicole was taken she was part of a street gang where she had to live by her wits and compromise, with alcohol her preferred method of escaping the bad parts. Aboard the Fyrantha, she tries to work the same dynamic, not letting anyone get close, playing her crewmates against each other when necessary, but is forced by circumstances and an unexpected stubborn compassion into a new role.

DJ: What is the world and setting of the The Sibyl’s War trilogy like?

Timothy: Apart from the human work crews, the Fyrantha is peopled by the Shipmasters who control it and the Wisps who are part of the ship and perform various functions.

DJ: What was your favorite part about writing Queen?

Timothy: The triple challenges of writing the final book of a trilogy are to bring all the plot threads together, clear up any and all loose ends, and provide a big, bang-up, satisfying climax for the story and the characters.DJ: Did you have a goal when you began writing The Sibyl’s War trilogy? Was there a particular message or meaning you are hoping to get across when readers finish it? Or is there perhaps a certain theme to the story?

DJ: Did you have a goal when you began writing The Sibyl’s War trilogy? Was there a particular message or meaning you are hoping to get across when readers finish it? Or is there perhaps a certain theme to the story?

Timothy: My original plan was to have Nicole in an emotionally abusive relationship, with Bungie, her Earth boyfriend/abuser, who was accidentally taken aboard with her. However, the (female) friends who I asked to read the first few chapters universally agreed that the relationship was too intense and too painful, and that many readers would never get past the first book to see her growth and triumph at the end. So I backed it off a bit, giving Nicole a generally unhappy background and Bungie just one of the gang who likes to be abusive toward her.

Timothy: Actually, it all went down pretty much as I envisioned it from the start.

DJ: When I read, I love to collect quotes – whether it be because they’re funny, foodie, or have a personal meaning to me. Do you have any favorite quotes from Queen that you can share with us?

Timothy: I guess the quotes I most like are those that give us a look into a character’s soul, particularly those that show change or growth. Here’s one that flows pretty well:

She’d seldom been in control of her life or the people or events around her. But she’d always been in control of her feelings, deadening them as needed to get through whatever crisis dropped onto her. Now, unbidden and unwanted, emotions and feelings she’d thought were in check were suddenly bursting out of their crypt.

And that was terrifying. Needing people was the fastest way to become vulnerable to anyone who wanted to hurt you.

DJ: Now that Queen is released, what is next for you?

Timothy: I have two more Star Wars books under contract (the final two of the Thrawn Ascendancy trilogy) and three more books in the Manticore Ascendant series (prequels to David Weber’s Honor Harrington saga) with David and Thomas Pope. Then, probably another trilogy or series or perhaps a standalone book or two.

***Queen is published by Tor Books and is available TODAY!!!*** 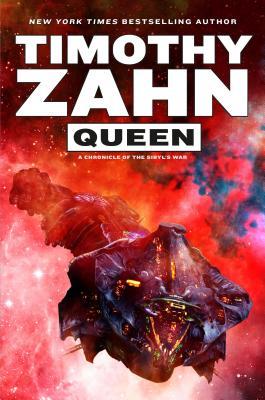 Nicole Hammond is a Sibyl, a special human that has the ability to communicate with a strange alien ship called the Fyrantha.

However, Nicole and all other sentient creatures are caught up in a war for control between two competing factions. Now, the street-kid turned rebel leader has a plan that would restore freedom to all who have been shanghaied by the strange ship.

She just has to unite the many alien races being forced to combat for their freedom, dodge slaving war profiteers determined to capture her, and convince an AI at war with itself to trust her above all else.

Timothy Zahn is the author of more than forty science fiction novels. He has also written many short stories, as well as Cascade Point, which won the Hugo Award for best novella. His other works include the Dragonback series, of which Dragon and Thief was an ALA Best Book for Young Adults, and the bestselling Star Wars™ novel, Heir to the Empire. Zahn lives in Oregon.