Tag Archives: Bigfoot and the Bodhisattva

Today I am interviewing James Morrow, author of the novelette, “Bigfoot and the Bodhisattva,” recently released as an e-book under the new Particle Books imprint from Tachyon Publications.

Over the course of a long career, Jim has published ten novels, four stand-alone novellas, and three short-story collections. He has won the World Fantasy Award (twice), the Nebula Award (twice), the Theodore Sturgeon Memorial Award, the Grand Prix de l’Imaginaire, and the Prix Utopia. His fiction has been translated into thirteen languages.

DJ: Hey James! Thanks for agreeing to do this interview! For readers who aren’t familiar with you, could you tell us a little about yourself?

JM: I’m known primarily as a creator of theological fantasy with a satiric edge. My most popular novels in this vein are Only Begotten Daughter (concerning the tribulations of Jesus Christ’s divine half-sister in contemporary Atlantic City), Towing Jehovah (about a supertanker captain charged with burying God’s two-mile-long corpse), and Blameless in Abaddon (in which the Corpus Dei from the previous novel is put on trial for crimes against humanity).

But I’ve also written straightforward historical fiction (albeit filtered through a fantasist’s sensibility), notably The Last Witchfinder and Galápagos Regained.

“Bigfoot and the Bodhisattva” came about because readers (mostly at science fiction conventions) occasionally challenged me to think outside my theological comfort zone. It’s all very well to play games with Christian doctrines and Western philosophy, they argued, but why don’t you try applying your sensibility to Eastern religion?

DJ: Where did “Bigfoot and the Bodhisattva” first appear? 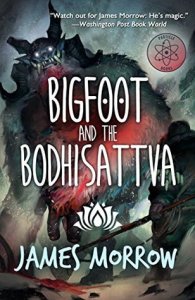 JM: I wrote it, at the editor’s request, for the Betwixt the Between issue of the literary journal Conjunctions: an esteemed and prestigious venue, but with a circumscribed readership. “Bigfoot and the Bodhisattva” was an ideal candidate for the Particle Books program, which is committed to offering (as the Tachyon website puts it) “a dynamic mix of original, newly-collected, hard to find, and out-of-print material.”

DJ: What is “Bigfoot and the Bodhisattva” about?

JM: The plot turns on the angst of the Abominable Snowman, Taktra Kunga, denizen of the Himalayas, who feels compelled to devour the cerebrums of doomed yuppie mountain climbers. In a quest to enlarge his soul, my yeti apprentices himself to the Fifteenth Dalai Lama, His Holiness, Chögi Gyatso, who promises to teach him about Tibetan Buddhism. Taktra reciprocates by protecting Chögi from the predations of the Chinese, who for generations have sought to destroy, or at least assimilate, Tibetan culture. END_OF_DOCUMENT_TOKEN_TO_BE_REPLACED