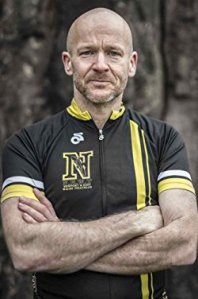 Today I am interviewing Christopher Golden and Tim Lebbon, co-authors of the new fantasy novel, Blood of the Four.

DJ: Hi Christopher Golden & Tim Lebbon! Thanks for agreeing to do this interview!

Tim Lebbon: I’ve been published for 20 years, but writing all my life. I’ve written over 40 novels (8 of them with Chris), and loads of novellas and short stories. I’ve won a few awards. And I’ve had two movies made from my work, Pay the Ghost and The Silence.

DJ: What is Blood of the Four about? 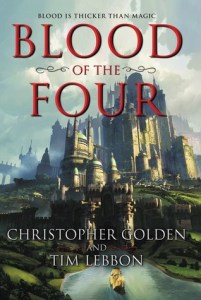 Tim: Perhaps it’s easier to use the publisher’s cover blurb… In the great kingdom of Quandis, everyone is a slave. Some are slaves to the gods. Most are slaves to everyone else.

Blessed by the gods with lives of comfort and splendor, the royal elite routinely perform their duties, yet some chafe at their role. A young woman of stunning ambition, Princess Phela refuses to allow a few obstacles—including her mother the queen and her brother, the heir apparent—stand in the way of claiming ultimate power and glory for herself.

Far below the royals are the Bajuman. Poor and oppressed, members of this wretched caste have but two paths out of servitude: the priesthood . . . or death.
Because magic has been kept at bay in Quandis, royals and Bajuman have lived together in an uneasy peace for centuries. But Princess Phela’s desire for power will disrupt the realm’s order, setting into motion a series of events that will end with her becoming a goddess in her own right . . . or ultimately destroying Quandis and all its inhabitants. END_OF_DOCUMENT_TOKEN_TO_BE_REPLACED

I know, I know; Boskone was almost 4 months ago now, but these book collection posts can take me quite a bit of time to put together! And, well, I’d kinda rather read or write a review of what I just read 🙂

Either way, here are all the books I got singed at Boskone 53!