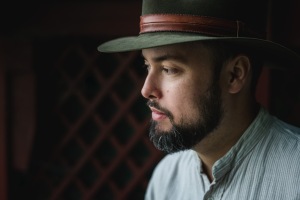 Today I am interviewing S.D. Reeves, author of the new fantasy novel, The Melody of Three, first book in the Evercharm trilogy.

DJ: Hi S.D.! Thanks for agreeing to do this interview!

S.D.: Hey DJ, thank you for the invitation!

S.D.: I am Southern born author from the great state of Alabama, living in Switzerland. So, this means I’ve traded in my “Morning Y’all,” for “Gruezi.” I write primarily fantasy, but I do occasionally dip into horror when it’s time to do my taxes. Outside of writing I enjoy playing the Cello, carving model ships, and pretending that the cracks in the sidewalk are lava.

DJ: What is The Melody of Three about? 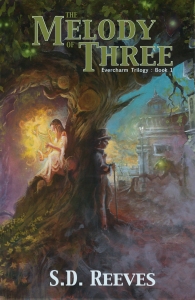 S.D.: It’s 1815. Napoleon has just returned from exile, fairy-bloods are being murdered in Britain, Elves have escaped from their ancient prison, and mysterious agents have overrun the Forum Magicae in Liverpool. Artisan (Sorceror) and Dutchman Christaan De Rein must find a way to end this challenge to the magical order and discover the secret behind the string of murders.

And in another world entirely, a young girl named Niena tries to survive. She holds the key to saving both of their worlds. Or destroying them.

DJ: What were some of your influences The Melody of Three and the series?

S.D.: It’s hard to pin down specific ones. Growing up I was like many people, enamored with the Lord of the Rings. I continued with a lot of the conventional authors after (Terry Pratchet, Rowling), though I was also a big fan of Anne McCaffrey’s Pern series. I would say they all had a hand in my writing style. Outside of this the biggest influence would have to be my wife, specifically her professional enthusiasm in the French Empire period, and living history. She spends a lot of time in museums studying original garments, and putting things together for events – what I’ve tagged along in. As you may have guessed from the description of the story, this heavily influenced the theme and setting.  END_OF_DOCUMENT_TOKEN_TO_BE_REPLACED